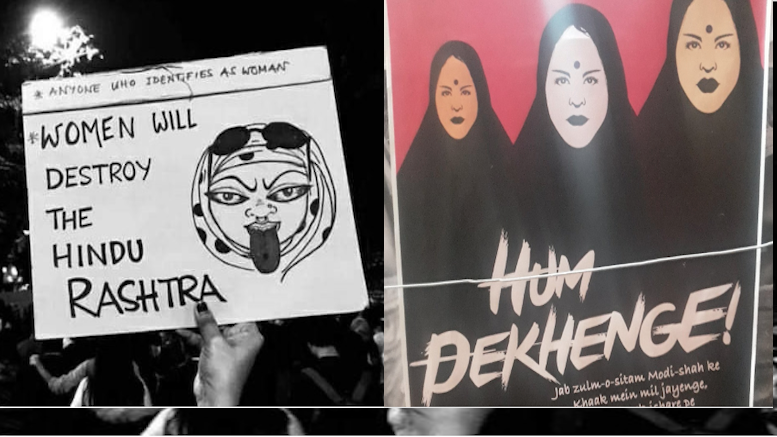 This farcical political protest held by Muslim women at Shaheen Bagh, New Delhi started on 15th of December. Though it was initially targeted at the Citizenship Amendment Act, it has come down to opposing National Register of Citizens (NRC) and the National Population Register (NPR) also. However, beneath the facade of “Save the Constitution”, the gathering at Shaheen Bagh seem to harbor hopes of eradicating Hindu identity from the land of Bharat.

It was first noticed when the revolting poster of an evil-looking woman went up. She had a hideous expression with crooked eyebrows, a tongue stuck out, and was covered in the hijab. Only those Hindus who enjoy living in denial would fail to recognize that the face that had surrendered to the Islamic veil was a demonized portrayal of the Hindu Goddess, Maa Kali.

Though the burqa or hijab clad Muslim women, allegedly hired at 500-700 rupees a day, with added benefits like a packet of biryani, have not been able to realize any tangible outcome in the last 35 odd days, they have certainly exposed their inner revulsion for the Hindu majority.

Even the second, equally disturbing poster flashed in the capital city features faces of three bindi-bearing women, shackled by black robes, screaming their Islamic identity. The revered Hindu symbol of swastika lies at their feet, crumbling, although protesters have duplicitously claimed it is the Nazi Hakenkreuz (hooked cross). In its imagery, the poster represents a subjugated, shattered Hindu identity. The message couldn’t be louder. This poster clearly hints that the intention is to ‘free’ bindi-sporting Hindu women by converting them into burqa-clad ones.

Does the Bindi have a religious connotation?

The bindi is not just another item of beautification kept in the dresser of a woman in the Bharatiya sub-continent. It is not a religion-less secular accessory or cosmetic item like a neck-chain or lipstick. A bindi that adorns the forehead of a sanatani woman is associated with the Ajna Chakra, and holds significance beyond exterior beauty in the Hindu culture. Bharatiya women of non-sanatani faith are also sometimes seen sporting the bindi, but that is just how a demography raised in mixed-culture behaves. The long and short of it is: the bindi, through centuries, remains a prominent identity of a Hindu woman.

Exhorting Hindu women to destroy the Hindu Rashtra (and ‘liberate’ themselves by adopting the Islamic hjab/burqa?), the message of Shaheen Bagh protesters couldn’t be clearer for those willing to listen. They are envisioning Ghazwa-e-Hind. And, like it has always been with Islamists, they have their eyes on the women first. This is a cruel reminder of the Kashmiri Pandit genocide in the early 90s, in which the blaring mosques would threaten the Hindus to leave Kashmir but leave their women behind to be possessed by the religious radicals.

The bloodbath of Kashmir that left lakhs of Hindus homeless, the naked dance of death that killed the modesty of hundreds of Hindu women peaked on 19th January 1990. In an ugly turn of events, the protesters at Shaheen Bagh have decided on celebrating ‘Jashn-e-Shaheen’ on that very day, which Hindus grieve as #KPExodusDay. We wonder what joy are they commemorating? The joy of ethnically cleansing Kashmiri Pandits from the valley? That this is happening in the capital city, under the nose of a ‘fascist’ government, is even more threatening.  If this doesn’t send chills down the secular spine, then perhaps the seculars are spineless.

The CAA introduced by the Narendra Modi government, aimed at granting Bharatiya citizenship to persecuted religious minorities of theocratic Islamic countries like Pakistan, Afghanistan, and Bangladesh, is a humanitarian step. Then why this chest-beating of Islamic pride?

Meanwhile, the lives of regular citizens of Delhi have been turned miserable. The distance that could be covered in 20 minutes, now takes several hours. Despite notices from the police, protesters show no intention of complying with law. But are we surprised?

We appeal to agitators at Road No. 13 A Shaheen Bagh to understand the sufferings that the complete highway blockade is causing to residents of Delhi & NCR, Senior Citizens, emergency patients & school going children. The matter has also come up before the Hon'ble High Court.