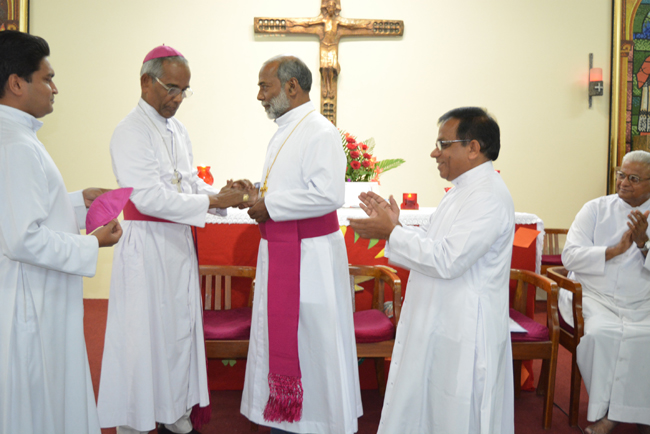 A priest of a church has been booked by police for raping a 37-year-old tribal woman at Kanapur village, Burhanpur district in Madhya Pradesh. The incident took place during the intervening night of Saturday and Sunday on the premises of the church in Kanapur, located around 37 km from the district headquarters.

The priest, Hanop Alexander, has gone absconding, the police said, adding that the woman as well as the accused had houses on the premises of the same church.

In her complaint, the woman said the accused forcibly took her to his room when she came out of her house at midnight. Following the incident, the woman raised an alarm, after which the accused fled on a motorcycle as people started gathering at the spot, the police said. The woman registered a complaint at Khaknar police station on Sunday morning.

The accused, a resident of Jabalpur, has been living on the premises of the church along with his wife and two children since the past few years. “However, the family of the priest has been away since the past one week and he was alone,” the police said.

The accused has been booked under IPC section 376 (rape) and the SC and ST (Prevention of Atrocities) Act. “We have booked the priest and a search has been launched to nab him. The case has been handed over to the AJK (Anusuchit Janjati Kalyan) police station,” he added.

Medical examination of the woman was conducted at a local hospital, David said adding that further investigation is on.

The church in Bharat and elsewhere in the world has a long-running problem of priests being accused of sexual abuse. While earlier such allegations were brushed under the carpet, the startling revelations over the last two decades of systemic abuse of minors by priests in various countries has brought the ugly truth to the surface.

The Church in Bharat has been accused of cover-up in many such cases. Most recently, priest Joseph Jeypaul was convicted of sexually assaulting a minor girl in USA, yet the Ooty Diocese covered up for him for a long time and finally the suspension against him was lifted at the direction of the Vatican. In 2015, Rev. Jose Varkey Palimattom was transferred by the Church in India to Florida, USA despite past sexual abuse of children in Bharat – the priest was found guilty of showing pornographic material to a minor in US and sentenced to 6 months of jail.

In 2012, a similar case of a tribal woman being raped by a Christian priest in Bhopal had been reported. Sheela, a representative of the woman’s organization campaigning on behalf of the rape victim said –

“The victim used to work at pastoral centre located opposite to St Joseph Co-ed School, near 11 number bus stop. The case is of year 2009 when she was working there as a maid servant. She was allegedly abused sexually for months by a priest at the pastoral center. When people of pastoral centre came to know about the incident, she was thrown out of job, said Sheela.

“We took the victim to the Bishop and complained against the accused priest but Bishop said he will save the clergy member and would not take any action against him,” said Sheela. We also complained to other Christian authorities including the highest order in Italy. We have been trying to get the victim justice for last two years internally through Christian forums but when justice was denied, we have made written complaints to Mahila police station, Ajak police station and inspector general of Bhopal range, added Sheela.”

One just has to contrast the high-decibel outrage in 2015 over the tragic rape of an elderly nun in West Bengal, with these cases where tribal Hindu women are victims of predatory Christian priests, to understand how the narrative in Bharat is controlled and the enormous clout the Church wields in media and other establishment circles.

In all likelihood, we will soon see planted stories questioning the veracity of the victim’s version, and ‘activists’ like John Dayal will start hinting about how ‘servants of God’ (i.e. Christian priests) are being trapped in BJP-ruled states like Madhya Pradesh. Women rights champions in Bharat will not flood the streets in protest for these tribal women, nor will the secular parties like Congress, AAP etc raise the issue in parliament.