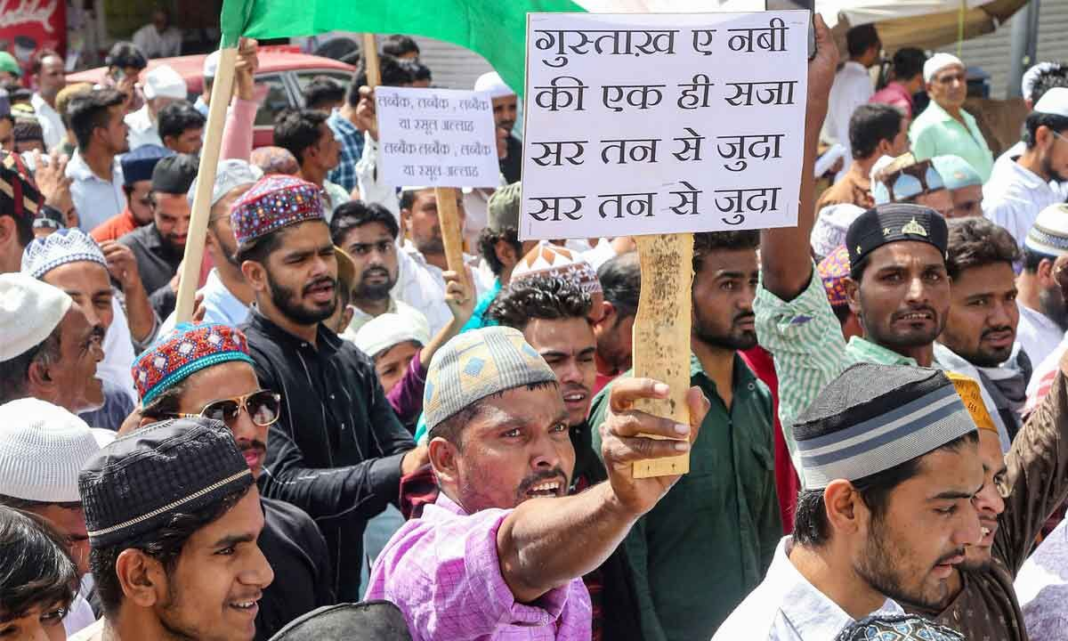 The whole of Bharat is now beginning to resemble a sharia state like those found in the Middle East. Expressing any opinion on social media on the Nupur Sharma case has become fraught with risk, as emboldened Muslim radicals start baying for blood at the slightest pretext.

It does not matter what someone’s reason is for supporting Nupur; whether it is because – a.) she was only responding to derogatory comments on the Shivling with a ‘what if Hindus target Islam’ counter by quoting from hadith b.) you support her right to free speech c.) you oppose the rape and death threats she has been receiving and believe rule of law and not mob fury should prevail. d.) you are angry with the hypocritical finger-wagging and threats to Bharat by theocratic & autocratic Islamic nations that don’t even recognize Hindu Dharma. None of this matters.

The way our entire polity – from ‘secular’ political parties like AIMIM, TMC, NCP etc; to Muslim religious bodies; to judiciary; to Lutyens’ intelligentsia – has ganged up against Nupur and tacitly condoned those baying for her blood, it has sent a clear signal to the Islamist mobs that they have a free pass. Even BJP’s capitulation and the way Nupur was suspended has played a big part in emboldening these fanatics.

Kanhaiyalal Teli’s beheading in Udaipur became known across the nation as the murderers posted a video of the act and proudly confessed to it while threatening to do the same to Nupur and the PM. Once that news went viral, the nation learnt about Umesh Kolhe’s murder in Amravati which happened almost a week before – police and media had suppressed that crime by painting it as ‘robbery related’. Now, more stories are emerging.

A 22-year-old youth in Nagpur had merely posted a short video supporting Nupur Sharma. The barrage of threats he and his family received after that compelled them to leave the city hurriedly a fortnight ago, reports Times of India. The article says –

“City police, intervening strongly in the matter, had stopped an almost certain attack on the youth last month, even before the Udaipur or Amravati incident shook up the nation.

The family of the youth had deleted the objectionable post or reel supporting Nupur Sharma, and he had also furnished apologies repeatedly. However, the family was left unnerved after the other community posted a picture of him with a cross across it and abusive language inscribed on it, threatening of dire consequences.

The family, despite the strong police action, is still reeling in fear and left their son somewhere else when returning to the city after spending around two weeks away, to let matters settle down. The family, which runs a business, now ensures members leave home only for emergency work and return as soon as possible. They have been avoiding unnecessary venturing out of their home.

“Our movement has become restricted. We move out only when necessary,” said the elder brother of the youth. “After the recent incidents (Amravati and Udaipur), we are scared,” he said. His words show a fear that even police presence and assurance are not able to drive away.

“We had initially taken away my younger brother’s cellphone for quite a long time after the incident. Today, we are unable to bring him back to the city,” said the elder brother, highlighting the panic and insecurity in their minds. The cops, not taking any chance, have posted armed police at their house.

Senior Nandanvan police officials have also shared their mobile numbers with the family members for emergency. Apart from CP Amitesh Kumar, the security of the family is now being monitored by Zonal DCP Noorul Hasan and Addl CP Navinchandra Reddy.

So the entire police establishment in Nagpur had to be activated to save the lives of this family. How long will such police protection last? Or is this youth and his family now marked for life, with Islamists biding their time to strike like they did with Kamlesh Tiwari? The truth is that no police force, at least not one in a dysfunctional democracy like ours, can safeguard someone indefinitely. The only solution is to strike at the root of the problem – the religious radicalization which drives such fanaticism. Clamping down on the outfits like Tablighi Jamaat, Raza Academy, PFI, Deoband etc has become a must.

What is more, this youth was the fourth person to be saved from Muslim wrath over the Nupur issue in Nagpur alone! ‘Objectionable’ chats and posts had earlier landed three youngsters from Kamptee area of Nagpur in trouble. Cops had to toil hard to shield those youngsters as well and bring the situation under control, the article adds.