Brahmin youth brutally beaten over trivial dispute, attempts made to cut off his shikha 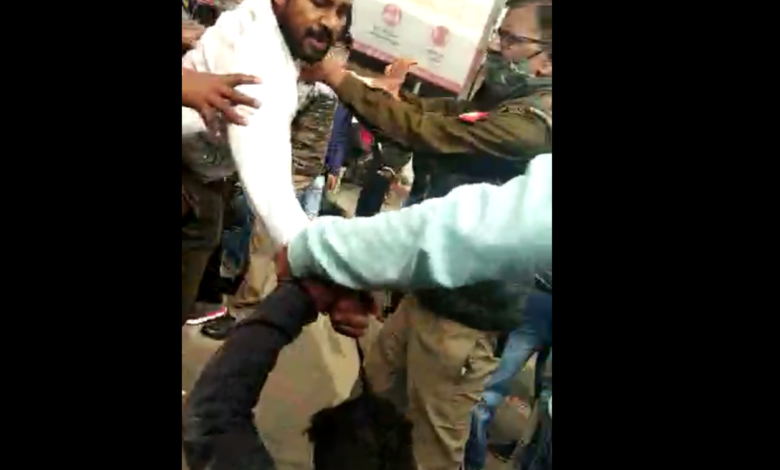 A Brahmin youth residing in Madhavpuram of Meerut district’s Brahmapuri police jurisdiction was brutally beaten up using sharp weapons over a trivial dispute with his Dalit neighbor. Reports state that Navnit Valmiki along with his relatives used a sharp weapon to attack Brahmin youth Manoj Bhatt after the latter’s scooty touched the gate of Valmiki’s house when he was trying to navigate the narrow lane.

It has come to light that construction activity was going on at the Valmiki residence. Manoj was on his way out when due to lack of space his scooty happened to touch the gate leading to the dispute. Valmiki had already been harboring a grudge against the Dharmanand Bhatt and his family and the incident simply gave him the excuse needed to vent his ire. Hence, despite the youth asking for forgiveness, Valmiki continued to abuse the Brahmin family using casteist slurs.

Navnit even passed uncivilized comments about Manoj’s shikha (tuft of hair kept by Brahmins) which the latter objected to. Following this, Navnit, his brother Sumit and others, numbering about 10-12, attacked Manoj and his father who had headed to the petrol pump.

A Brahmin boy was brutally beaten up by the Dalits for his "Shikha". They brutally thrashed the boy with rods & Knife and tried to cut his Shikha over a trivial dispute. Some 10-12 Dalits had done this inhumane act. The accused belongs to Meerut, UP. #brahminlivesmatter pic.twitter.com/sZ9blTy4xD

The group assaulted Manoj and his father causing severe injuries to both. Manoj’s father even fell unconscious due to the assault. As per available information, Navnit even tried to cut of Manoj’s shikha. A video of the entire incident went viral on social media, where Navnit can clearly be seen abusing the victim and threatening to cut off his shikha while the other accused continue beating the Brahmin youth.

Manoj’s family members informed the media that the Dalit family nurtured hatred for Brahmins and always find reasons to target members of the Brahmin community. They purposely passed comments on Manoj’s shikha and began bashing him when he objected to the uncouth comments.

As per the family of the victim, the accused belong to the Hindu Yuva Vahini, an organization backed by the ruling BJP, and hence no action is being taken against them. The police are not arresting the accused alleged due to their political links. In fact, no case was registered against Valmiki and other accused until the video went viral on social media.

The police later begrudgingly registered an FIR in the case but have applied a few light sections. The accused, on the other hand, are forcing the victim and his family for a settlement by threatening to file a case under the draconian SC ST Atrocity Act.