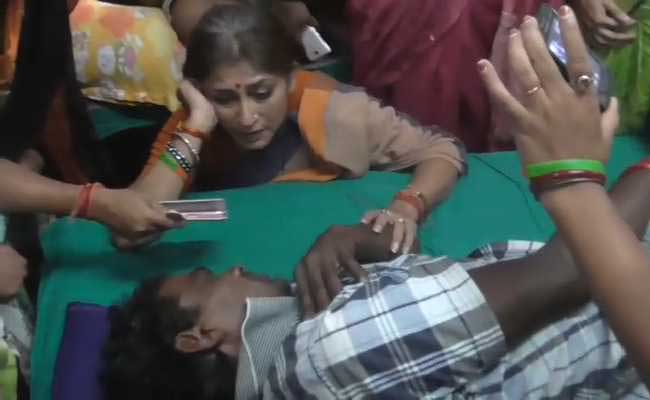 Actor-turned BJP leader Roopa Ganguly seems to be on the hit list of Mamta Banerjee’s TMC party. On Sunday, Roopa Ganguly was heckled and attacked by TMC supporters near Diamond Harbour in South 24 Parganas district when she was returning to Kolkata.

“The incident happened when Ganguly, along with other BJP workers, was returning from Ishwaripur village near Kakdwip in South 24 Parganas after visiting a party worker, who was assaulted allegedly by TMC workers on Saturday and was admitted to a local hospital there, a senior district police officer told PTI.

“Despite several requests, Roopa stopped her car and two other cars in her convoy near Diamond Harbour on her way to Kolkata and started talking to locals, which enraged them. Some boys threw stones at the convoy while few women from the locality pulled Roopa’s hair and slapped another woman who was with her,” the officer said.

The police posted there intervened and restrained the locals and took control of the situation, he said, adding though Roopa was “not injured”, she was taken to a local hospital, where from she was released after a check-up.

“We have not arrested anybody in connection with the incident, but a police posting has been arranged in the locality,” he said. The BJP leader and the party workers accompanying her, however, alleged that they were attacked by TMC activists.”

We can imagine the OUTRAGE on news channels a similar assault had occured on Priyanka Vadra in a BJP ruled state. But the attack on Roopa Ganguly has barely created a ripple in the news cycle, despite her being repeatedly targeted by TMC leaders and goons.

A few weeks back, Abdur Rezzak Mollah, an expelled CPM leader who recently joined TMC & won the Bhangore assembly seat, had made a crude derogatory remark on Roopa Ganguly’s personal life, “I know the length of the cigarettes she (Roopa) smokes or with whom she lives with.” He went on to add, “She really is Draupadi”. Coming from a Muslim, the Draupadi comment can only be interpreted as a slur that Roopa Ganguly is a promiscuous woman.  In Mollah’s mind, the fact that Draupadi, a strong-willed woman and one of the central figures of the Mahabharata, was the wife of the five Pandavas, probably marks her out as a woman with ‘loose morals’.

For Abrahamics like Mollah, polyandry is sinful but polygamy is halal (permitted in Islam). Deeper understanding of an epic like Mahabharata which has various layered meanings buried within it, is probably beyond the likes of Mollah. Foe eg. as per Narada and Vayu Puranas, Draupadi was the composite Avatar of Goddesses Shyamala (wife of Dharma), Bharati (Wife of Vayu), Sachi (wife of Indra), Usha (wife of Ashwinis) and hence married their earthly counterparts in the form of the five Pandavas. Draupadi was a strong woman who stood by her husbands during their harsh exile in the forest. She had immense self-respect and asked her husbands to avenge her humiliation by Duryodhana and his Kaurava brothers. Thus, Mollah has unwittingly paid a compliment to Roopa Ganguly by comparing her to the remarkable Draupadi.

It is notable that despite Mollah’s crass and objectionable comment regarding Draupadi, no Hindu organization threatened him in any way. Election Commission slapped an FIR on him, and seeing the public fallout of his uncouth utterances, the TMC party forced him to apologize. Contrast this with the calls to behead Kamlesh Tiwari issued by Muslim organizations across the nation, in reaction to his alleged objectionable comments about the prophet of Islam.

Roopa Ganguly was attacked and abused by TMC last year too

In April 2015, just before the Kolkata Municipal Corporation elections, Roopa Ganguly was attacked in the heart of Kolkata, a stone’s throw away from the CM’s residence, as per this news report –

Roopa was shoved around and had to be rescued by the police, who threw a protective ring around her and pushed past the mob. Ward 74 candidate Paromita Dutta was injured. Roopa’s driver was beaten up and her car damaged.

“Mamata Banerjee’s goons pushed me and abused me in the filthiest language. The policemen saved me, or else it could have been worse,” said Roopa.”

Now that TMC has stormed back to power in West Bengal, with their cadre’s violent and murderous ways contributing in no small measure, the prognosis for this crucial border state does not look good. But given the ferocity with which the TMC keeps attacking Roopa Ganguly, that in itself might contain a message for the BJP top brass on what strategy to adopt for the 2021 assembly elections.