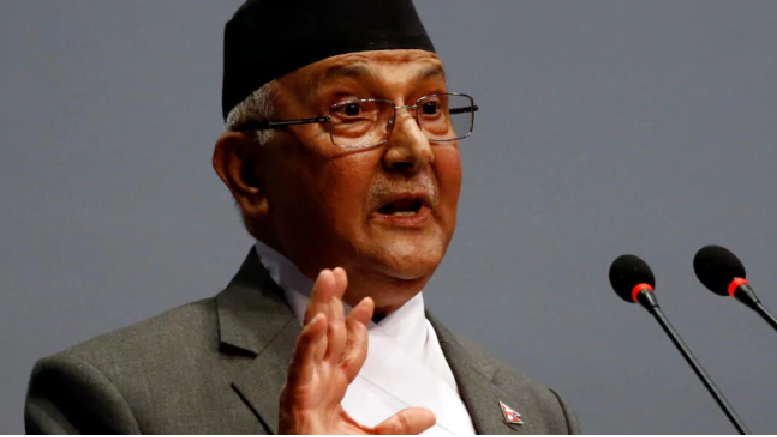 As per this New Indian Express report –

“Activists of Hindu Dharam Suraksha Parishad and Bangladesh National Hindu Grand Alliance made a human chain outside Jatiya Press Club to protest against Oli’s remarks that Lord Ram belongs to Nepal and not India.

Protesters said that “invisible forces” were instigating Nepal to issue misleading statements on Lord Ram. The Nepali Prime Minister created a controversy on July 13 stating that real Ayodhya lies in Nepal, not in India and that Lord Ram was born in Thori in southern Nepal.

On July 17, Jagrato Hindu Samaj activists also carried out a human chain at Dhaka Press Club to protest against the remarks of the Nepali Prime Minister.

Subsequently, the Nepali Foreign Office went into a damage control mode. It stated” “As there have been several myths and references about Lord Ram and the places associated with him, the prime minister was simply highlighting the importance of further studies and research of the vast cultural geography the Ramayana represents to obtain facts about Shri Ram, Ramayana and the various places linked to this rich civilization”.

“The remarks were not meant to debase the significance of Ayodhya and the cultural value it bears”, it added.”

PM KP Oli belongs to the Nepal Communist Party, and critics allege that he and past Communist governments over the last decade have reduced Nepal to a virtual Chinese colony. In recent times China has violated Nepal’s territorial integrity and grabbed land, similar to how it has behaved with other neighbours like Bhutan and Nepal.

Moreover, Oli’s denigration of Hindu itihasa and mocking our religion is standard operating procedure for communists across the sub-continent. Many Marxist ‘historians’ have said what Oli is saying – that Sri Ram was not born in Ayodhya. They have brazenly lied in court during the Ram Janmabhoomi case despite overwhelming archaeological and historical evidence that a Ram temple was destroyed to build a mosque during Babur’s time.

Undermining the civilisational and traditional roots of a country to impose their ideology is a time-tested communist tactic. In Russia,  Communists destroyed Orthodox churches and built swimming pools in line with their motto: ‘Religion is the opium of the masses’. After Communism collpased in 1991, Russians rebuilt even more majestic churches on many of those sites.

Hindus in Nepal and elsewhere have to gather their strength and jointly combat the deadly Communists-Secularist-Islamist assault on their Dharma and way of life.