Badruddin Ajmal Asks Muslims To ‘Unite Against Hindus’ In Assam 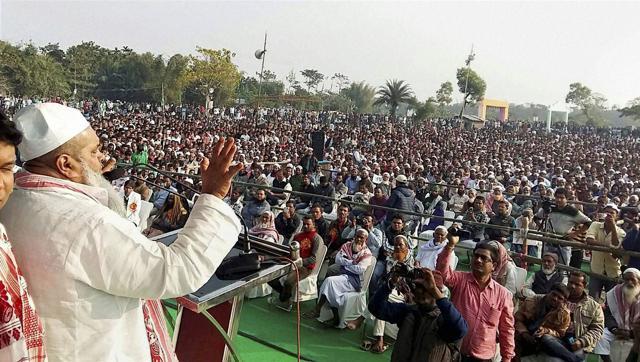 All India United Democratic Front (AIUDF) chief Maulana Badruddin Ajmal has issued an appeal to Muslims in Assam to “unite against Hindus”. The ruling Congress party has on the surface issued a ‘condemnation’ of this divisive rhetoric, but there are hectic behind the scene parleys to patch up some kind of arrangement between Congress and AIUDF for the upcoming Assam assembly polls, to ensure that there is no division of the ‘secular’ (aka Muslim) vote.

AIUDF holds 18 seats in the 126 member Assam Assembly, and is said to rely on illegal Bangladeshi Muslims as its core vote bank. Badruddin Ajmal has in the past been accused by indigenous Assamese Muslim groups with fanning communal sentiments in the wake of the 2012 Assam riots, and of instigating the exodus of North-east students and workers from the West and South of Bharat.

In a speech given in the Lok Sabha on 8 Aug 2012, Ajmal can be heard denying presence of any illegal Bangladeshi Muslims in Assam by labeling them as ‘Bengali speaking Muslims’ settled in Assam before partition of Bharat. He also says that if anyone claims the ‘Bengali speaking Muslims’ in Assam are Bangladeshi, then senior BJP leader L.K. Advani should also be called ‘Pakistani’ (Shri Advani’s family had migrated during partition from Sindh)

Yet, despite the frequent communal rhetoric from Ajmal and his denial of a serious illegal immigration problem that even the Supreme Court (SC) has acknowledged is a national security threat, Congress CM Tarun Gogoi has issued a ‘secular’ certificate to Ajmal and AIUDF by saying “The AIUDF was fighting communal forces.” This is what the SC said in April last year while coming down heavily on the Congress Govt. in Assam for its lackadaisical approach to this serious problem –

“Assam faced tumultuous cultural and demographic changes because of the massive influx from Bangladesh and had directed the Centre to talk to the neighbouring country to streamline procedures for deportation of illegal migrants.”

This IndiaFacts article by Dr. J.K. Bajaj states the clear and present danger facing Assam due to this demographic invasion –

Badruddin Ajmal is the president of the Assam State Jamiat Ulema-e-Hind and a member of the advisory board of Darul Uloom Deoband, his alma mater from where he has earned his Masters Degree in Islamic Theology and Arabic. His positions on sensitive issues thereby acquire a deeper meaning for Muslims across Bharat. He has a global business empire in perfumes, with friends in Islamic circles in Bharat as well as abroad. Thus his stand on issues has wider implications for Muslim politics in Bharat.

Normally, one would expect the national mainstream media to call out bigotry by the likes of Badruddin Ajmal and investigate their trans-national links which are a direct threat to the integrity of Bharat. On the contrary ‘renowned political commentators’ like Shekhar Gupta have this to say about Ajmal and his ilk –

Mr Owaisi and, to an extent, Mr Ajmal spoke a more modern language, of jobs and empowerment….Messrs Owaisi and Ajmal could be forces of modernity.

So the pertinent question to ask is – whose national interest does Mr. Gupta, who once garnered a salary of around Rs. 10 crore per year at Indian Express, represent? Why is no one discussing the clear and present danger facing Assam due to the unchecked inflow of Bangladeshi Muslims?