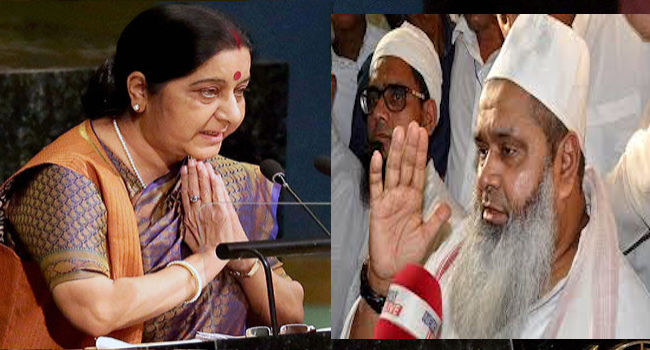 Bharat’s recent vote in support of a UN resolution that rejected US President Trump’s acceptance of Jerusalem as the capital of Israel, has been cheered by Muslim leaders & our communist-secular clique, not for any considered reasons of the vote being in our national interest, but because supporting Palestine is a blind matter of faith for the pan-Islamic ummah.

Hence it was no surprise to see Badruddin Ajmal, leader of the deceptively named AIUDF (All India United Democratic Front) party, posting a congratulatory tweet to Bharat’s Minister of External Affairs on the vote –

Thanks Government of India for voting in the UN against US decision of Jerusalem as Israel's capital.@SushmaSwaraj

As reported earlier in HinduPost, Badruddin Ajmal is a dangerous Islamist politican who stands accused of playing a part in the 2012 Assam riots, instigating the exodus of North-east students and workers from the West and South of Bharat, and someone that even indigenous Assamese Muslims accuse of harboring illegal Bangladeshi Muslims. AIUDF is said to rely on illegal Bangladeshi Muslims as its core vote bank.

Recently, while speaking at a public event where Ajmal too was on the stage, former AIUDF Assam MLA Sheikh Shah Alom made a chilling threat that a day would soon arrive when Muslims would attack Hindus. He was speaking with reference to illegal Bangladeshi Muslim immigrants potentially being left out in the ongoing Supreme Court-monitored updation of National Register of Citizen (NRC) in Assam.

While Ajmal and his party publicly disassociated from Alom’s incendiary speech, Ajmal himself had exhorted Muslims in Assam to “unite against Hindus” during an election speech before the 2016 Assam assembly elections.

Despite all this, Ajmal, who is also president of the Assam State Jamiat Ulema-e-Hind and a ‘master’s degree’ holder in Islamic Theology and Arabic from Deoband Islamic seminary, is quite a favorite of the Delhi-based media cabal who had anointed him as the ‘perfume king’ and presented him as a powerful kingmaker from the North East in the ‘secular’ scheme of things.

One can excuse a common man for not being fully aware of Ajmal’s background, given the positive press he receives in mainstream media. But surely, the threat he poses to the integrity of the country cannot be hidden from a senior BJP politician who also happens to be the country’s external affairs minister? Yet, this is how Sushma Swaraj responded –

Thank you Ajmal Sahib. Now you vote for us. https://t.co/OsQPv4PNDe

Isn’t this explicit acceptance of the secular narrative which says that the Muslim vote needs special pandering? Bharat’s External Affairs ministry could have various reasons for voting the way it did over this particular UN resolution – after all, US’ closest ally UK also voted against them- but why should a senior leader of a nationalist party expect a Badruddin Ajmal to vote for them only if Bharat sides with Palestine in the complex Israel-Palestine conflict?

If tomorrow, our national interest requires us to stand with Israel on some other issue, will it mean that Muslims of the country are justified in opposing that decision? Will Sushma Swaraj accept an alliance between BJP and AIDUF on the condition that henceforth GOI blindly support Palestine in international fora?

Ajmal’s response to Swaraj was a stinging slap –

Our vote is always for India, Madam. The day BJP does not differentiate between Majority and Minority community, our vote will be for you. https://t.co/yLoEoCazqD

So Sushma Swaraj’s too smart by half pandering to Ajmal ‘sahib’ allowed a known Islamist rabble rouser and votary of illegal immigration, to take the moral high ground and project a nationalist party like BJP as the communal entity!

We hope this serves as a lesson to nationalist leaders who still harbor a need for ‘secular’ approval.

24 Dec, 2 PM: Ajmal delivered another slap to Sushma ji’s attempt to attract his vote, with the below tweet:

I am grateful to the BJP for seeking our support but there is no question of supporting the BJP ever. The present situation has become so communally polarized. We can't be party to a government like this…https://t.co/r5oLGPyxEb