In yet another shocking incident from the Aligarh Muslim University (AMU), a male Muslim student, Rahbar Danish has threatened a Hindu female student of forcing a ‘brass hijab’ on her once the varsity reopens. The objectionable statement was made on Social Media after which the girl registered an FIR against the fellow student. 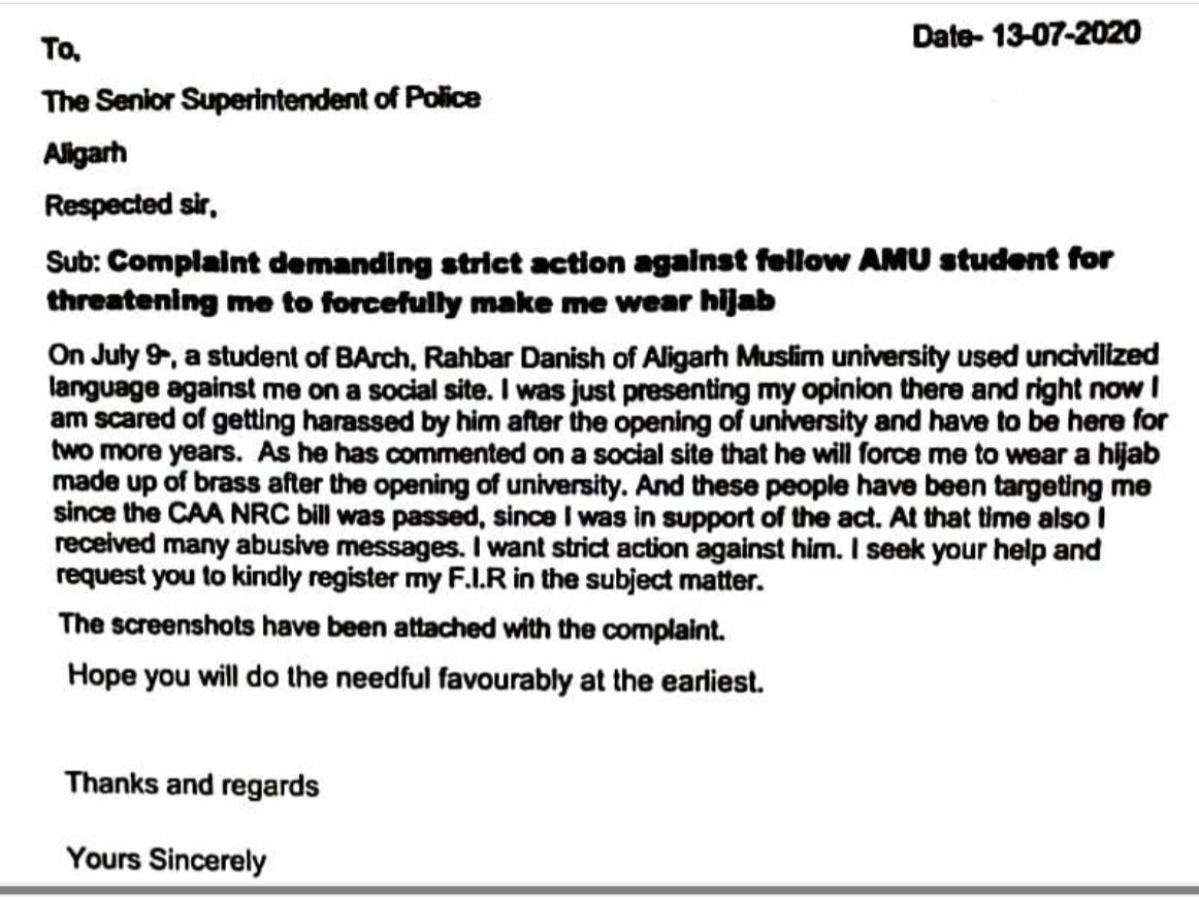 The female student, who is being harassed since the past several months by architecture student Rahbar Danish, is pursuing Engineering. The harassment began after the Hindu student’s pro-NRC and pro-CAA stand. In her complaint to the SSP, she writes how she was being threatened that she would be forced to wear a hijab (head-cover worn by Muslim women) made out of brass. Some have interpreted this as a veiled threat to shoot the girl in the head.

She has also submitted screenshots of the disparaging posts to the officials demanding stringent action against Danish. These posts were outright revolting and it is unacceptable that any college student would have to face such bullying. 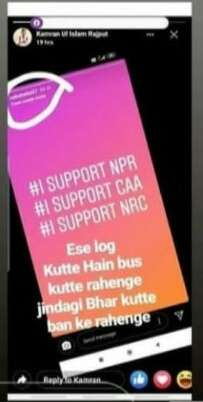 The female student has two more years to complete her degree and harbors fears about her safety within the institution. Meena Kumari, a member of the Uttar Pradesh Women’s Commission, has also reached out to the SSP to lodge an FIR against Danish.

On the basis of this complaint, an FIR has been registered against Rahbhar Danish under IPC sections 504 and 506 and Section 67 of the IT Act. “After a preliminary inquiry, Section 153 A of IPC has been added,” informed Muniraj P, SSP Aligarh. This section of the IPC reads “promoting enmity between different groups on grounds of religion, race, place of birth, residence, language, etc., and doing acts prejudicial to maintenance of harmony.”

The hijab is a religious garb that is worn by Muslim women to cover their heads. It is appalling that in a secular country, a Muslim man has the audacity to threaten a Hindu woman of forcing a hijab on her. When questioned, Danish stated he had intended to write ‘peet ke’ (beating) which was autocorrected to ‘peetal ka’ (made of brass). It’s even more outrageous that he was threatening to physically assault a female and feels comfortable in offering that as his defense.

Rahbhar Danish, who is at his home due to the lockdown, is a resident of Aurangabad, Bihar. According to the police, officials were on their way to his residence to arrest him.

On the other hand, AMU spokesperson Shafey Kidwai informed that the university had formed a three-member inquiry committee to probe further into the charges. Former President of AMU Students’ Union, Faizul Hasan, has condemned the incident stating, “There is zero tolerance for such an act on the campus.”

AMU, along with Jamia Millia Islamia university, was at the heart of the violence that erupted after CAA bill was passed last December, which eventually culminated in the Delhi riots that left over 50 dead. The university founded by Syed Ahmed Khan, progenitor of the 2-nation theory, has always been a hotbed of Islamic supremacism and extremism but the hidden bigotry was previously censored by the mainstream media.

As this OpIndia report shows, a few months back, some Islamic extremists at AMU threatened to kill Hindu students by posting intimidating social media messages. Around the same time, two AMU students were booked for pro-Pakistan FB posts. In 2010, Professor Shrinivas Ramchandra Siras was suspended by AMU after he was outed as a homosexual, and then found dead in murky circumstances soon after High Court overturned his suspension.

In 2014, AMU Vice Chancellor Lt. Gen. (retd.) Zameeruddin Shah denied access to girls for the varsity’s library claiming it would be a ‘distraction for boys and lead to overcrowding’.