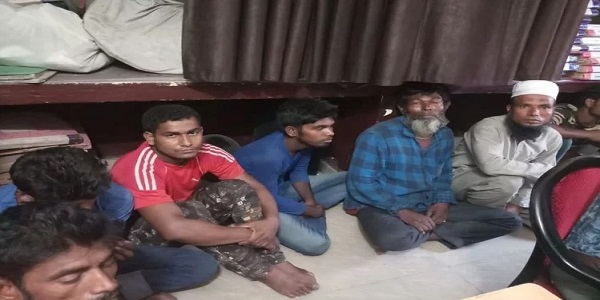 16 Rohingya Muslims were caught at Agra Fort station on Saturday, 6th October, 2018. They had arrived from Kolkata to meet Muslim families already living in Runakta in Agra. They all were holding Refugee cards. After a long inquiry session, they were released in the evening next day as reported in Hindi daily Amar Ujala.

They all were living in Arakan region of Myanmar from where they came to Bangladesh 2 years back. From Bangladesh they went to Hyderabad via Kolkata, stayed there for sometime and then returned to Kolkata where they were indulged in junk work.

During inquiry they told that they are out of work and have come to Agra to search some job. They were going to meet Yusuf in Runakta. Surprisingly, Yusuf is also a Rohingya, who along with other Rohingya Muslims, has already been living in road side slums in Runakta.

The arrested Rohingyas include 6 men, 5 women along with 5 children. 2 men were called from Runakta. All were questioned by intelligence agencies. These included Yunis, Samim, Salim, Mamta, Vavuluddin, Kulamiyan and Abdul Karim.

CO Sadar Udayraj Singh told that they all have been released for a while. The Refugee cards, that they were holding, will be verified. These cards are issued by United Nations Commission for Refugees and are valid till 2019.