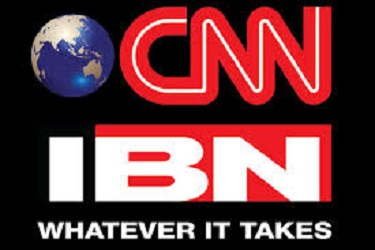 Under fire CNN IBN News Editor Raghav Chopra who was caught yesterday spreading a morphed image of PM Modi, today offered an apology after the story went viral on Hindupost, causing a furore on social media and even the Government took cognizance of his act. He tweeted, “I sincerely regret posting a morphed picture of the PM on my Facebook page. I should have also verified its authenticity before tweeting it.”

The second part of his statement, that he failed to ‘verify’ the authenticity of the morphed image, is an attempt to weasel out of accepting full responsibility; by implying that someone else created the image, he just made an error in tweeting it. Even a person with a glass eye, much less an editor with a news channel, could have smelt from a mile out that the photo is fake – the sight of the PM bending to touch the Saudi king’s feet is so incongruous for anyone with an iota of familiarity with Bharat, that it is hard to buy Chopra’s argument that he believed it to be true.

And when we see Chopra’s past, the ugly truth emerges that this is not the first instance of him posting morphed/doctored images of Narendra Modi – Raghav Chopra is a habitual offender, who seems to get some perverse joy out of creating and posting such fake pics. Here are two examples from the Raghav Chopra ‘school of photography’

This image was posted by Chopra as polling for the 2014 Lok Sabha elections was coming to a close, when it was all but evident that NDA would get a thumping majority in Lok Sabha. This probably so infuriated Chopra that he tweeted a photo of Modi taking a selfie with the Lotus symbol of BJP, and added the text “And here’s Narendra Modi wondering why his paper lotus doesn’t smell like a rose. Or Smriti Irani’s perfume.“ 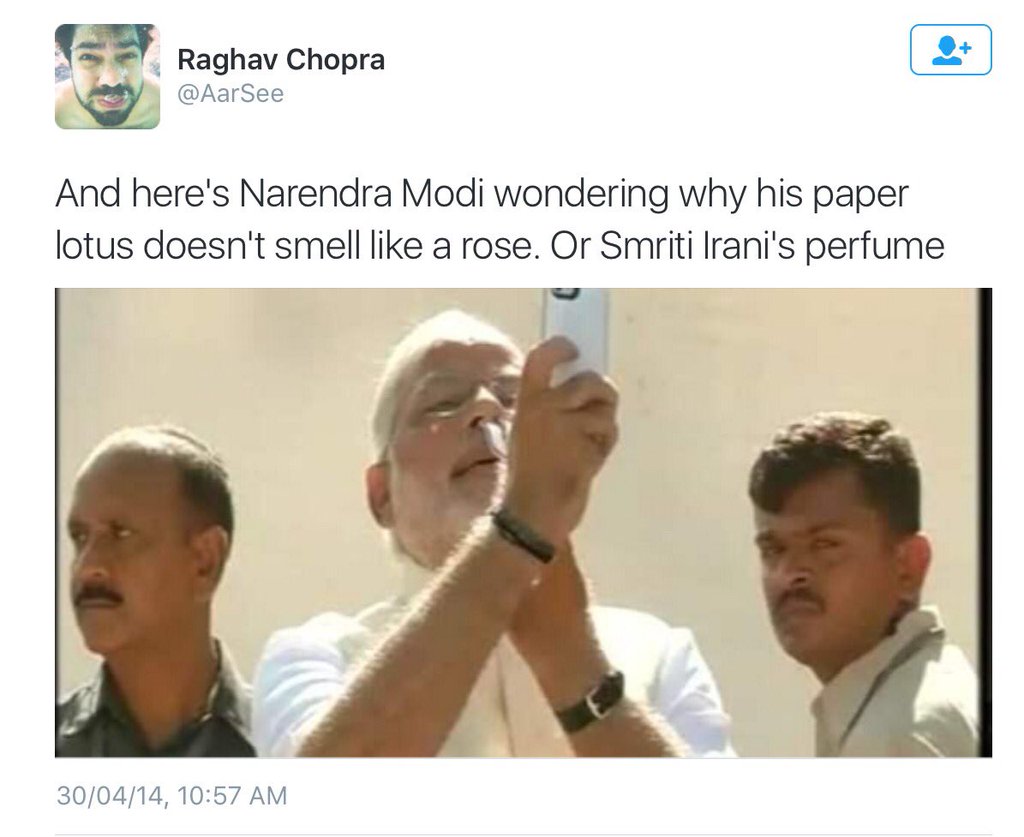 This sick innuendo suggesting a relationship between Narendra Modi and Smriti Irani is a widely held belief in the seedy alleys of Lutyen’s ‘source-based’ media circles. The idea implicit in this ‘wink wink, nudge nudge’ gossip is that a woman like Smriti Irani could never have risen in politics based on her own abilities. In fact, this innate aversion to Smriti Irani is a unique phenomenon shared by many in media and others in the Congress ecosystem. Another journalist Saba Naqvi had written a hatchet piece on Smriti Irani in Outlook, based entirely on ‘anonymous sources’! The trend was probably started by Congress MP Sanjay Nirupam who had back in 2012 insulted Smriti by calling her a ‘nachne gaane wali’ (dancer with loose morals) on ABP News TV. But none of our celebrity liberals and TV talking heads who rail for ‘justice’ for likes of Kanhaiya Kumar & Umar Khalid found the time to condemn Naqvi, Chopra, or Nirupam for their disparaging sexism towards a woman who has achieved much in the field of politics. Would our civil society elites have reacted in an equally nonchalant fashion had a senior journalist tweeted something sexist about Priyanka Vadra or Sonia Gandhi?

This tweet by Chopra was another mis-representation wherein he claimed that PM Modi was sleeping in Parliament, whereas the truth was that Modi was just looking down to read some notes in his hand. The apology by Raghav Chopra is as insincere as was the one forced out of his ex-CNN IBN colleague and senior, Sagarika Ghose, who in 2011 was caught distorting a recorded interview with Sri Sri Ravi Shankar during a live panel debate on her TV show.  Even though 5 years have passed since unethical and immoral journalism standards were set by Ghose (and before her by Barkha Dutt of Radia Tapes fame), nothing seems to have changed in the way that our media functions. The reason is simple – until offenders like Raghav Chopra are prosecuted under the law of the land, future generations of journalists will not learn the right lesson..till then they will do ‘whatever it takes’ to generate TRPs and manufacture news.

And to expect the media fraternity to take some action in this case is like expecting pigs to fly. What media bigwigs offer are double standards, grand-standing over ethics committees, and just general chicanery.

As committed, we have filed a complaint at the Cyber Cell against @AarSee for tweeting morphed images of PM Modi pic.twitter.com/pbyGkdyuFz