In yet another display of the profound anti-Hindu indoctrination of our English-language media, TV news channel CNN-News 18 today used the hashtag #KanwariyaMenace while tweeting about the Thursday attack on kanwariyas by a radical Muslim mob in Tonk district of Rajasthan. 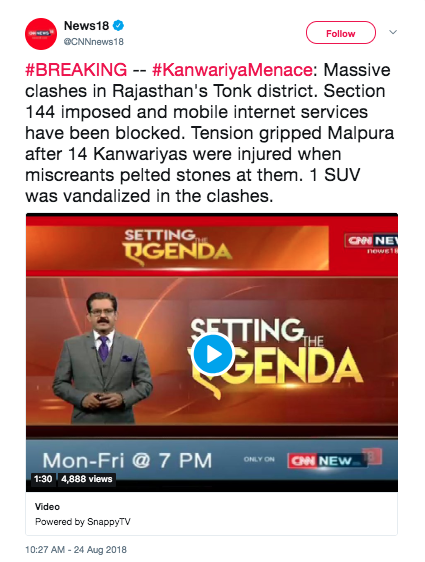 A few weeks back, the same English-language media had gone to town while reporting two incidents of vandalism committed by some Kanwariyas after road altercations. The entire Kanwariya pilgrimage, in which millions of ordinary Hindus participate, was painted as an act of hooliganism. Left-liberals of all shades jumped at the opportunity to bash and regulate another sphere of Hindu religious-social life – As per Amar Ujala, the situation continued to be tense in Malpura even on Friday. The local MP and MLA decided to take out a tiranga yatra (march with the national flag) in protest against the attack on Kanwariyas which took place the day after Bakrid. Police had clamped Section 144 in the town and did not give permission for the tiranga yatra to pass in front of a mosque. More stone pelting took place and 3 shops were burnt, and police had to resort to use of tear gas to control the situation.

So deep is the anti-Hindu animus of our left-liberal class that controls the English-language MSM and most state institutions, that the mere mention of a Hindu religious festival triggers a deep-rooted desire to criticize & shame. The root cause is our distorted and deracinated education system which breeds self-loathing in Hindus. The problem is especially acute in social science and humanities departments such as journalism, mass communication etc. of our universities, which are firmly controlled by Hinduphobic academics.

So it is no surprise that the hashtag #KanwariyaMenace jumped into the mind of whoever was handling the CNN-News18 twitter handle, without even bothering to spend 5 minutes to read what actually happened in Malpura. Or maybe, for the left-liberal mind, the mere existence of Hindu traditions like Kanwar Yatra, love for the cow, murti puja etc. are ‘menacing’?

The fact that the hashtag on the said tweet persists for over 24 hours, despite several twitterati explaining that in this case Kanwariyas were the ones attacked and around a dozen are in a critical condition, has had no effect on the news channel.

This anti-Hindu bias, conscious or otherwise, exists across the entire spectrum of the national media, differing only in degrees. Recently, Times of India was forced to ‘apologize’ for repeatedly mis-representing sexual crimes by godmen of minority religions as those committed by Hindu sadhus.