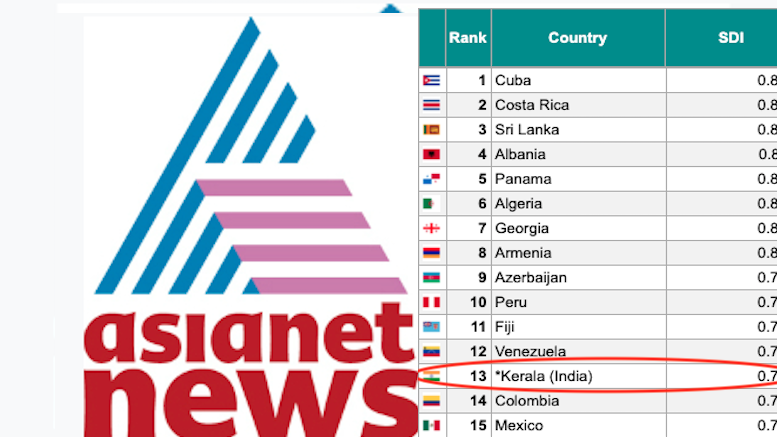 Kerala has been at the forefront when it comes to sending its citizens to other countries for work. The reason for this is plain and simple. Kerala has high literacy rates and an employable labour force. The downside is that there are no industries which offer employment.

This didn’t happen in a year or two. The state has voted either the communists or the congress to rule them. Corruption scandals have rocked each and every Congress rule leaving little or nothing for the citizens. The communists meanwhile have tried hard to keep out any large scale industries from operating here. This situation left many educated youth to migrate to foreign countries and other cities in Bharat searching for better opportunities.

Recently a website of some influence amongst the leftists, sustainabledevelopmentindex.org, came out with a report measuring something called Sustainable Development Index (SDI) based on methodology developed by Jason Hickel, whose twitter bio states he is an ‘Economic anthropologist’ who writes for Guardian, Foreign Policy, Al Jazeera on ‘Global inequality, political ecology & climate breakdown’. The coding for the SDI website is done by a Pakistani, Huzaifa Zoomkawala.

This SDI report mentioned Kerala as a separate country thereby creating a list of 196 nations instead of the 195. The world map of the website in question does not consider Kashmir as part of Bharat. They say that they measure the ecological efficiency of human development. A simple formula is adopted. It involves dividing development indices namely life expectancy, education and income by the CO2 emissions and material footprint. The lack of any industries worth mentioning meant that unlike the rest of Bharat, Kerala had no CO2 emissions.

Leading Malayalam news channel Asianet News supported these claims as an endorsement of the ‘Kerala Model’ and telecast their analysis of the same. This was met with resistance from a majority of Keralites who are nationalists.

The SDI website is clearly a dubious outlet which is directly challenging the sovereignty of Bharat and propagating a childish methodology which ignores the multiple facets of development. Even if a website does publish such dubious data, why would a channel from Bharat broadcast such views?

MG Radhakrishnan, Editor-in-Chief of Asianet News, is believed to be a staunch Marxist – he is the son of Communist ideologue late P Govinda Pillai. Earlier, the channel was banned for telecasting false information about the Delhi riots. The ban was immediately repealed by none other than Minister for Information and Broadcasting Mr. Prakash Javdekar. No reason for the repeal was revealed. This emboldened the reporters and editors to further their cause of anarchy with the help of their communist rulers.

Recently Minister for Health from the communist party of Kerala KK Shailaja was in the news for all the wrong reasons. She was being interviewed by BBC World News where she said that a Covid patient had come from the ‘Union Territory’ of Goa due to lack of proper hospitals there and later died in a hospital at Kannur. The Goa CM Dr. Pramod Sawant, himself a medical doctor by profession, educated Shailaja on facts regarding Goa being a state which never sent any Covid patients to Kerala. He also reminded her that Goa has excellent medical facilities and that the Goa Medical College is amongst the oldest in Bharat.

The patient Shailaja was referring to was actually from the tiny enclave of Mahe, which falls under the Union Territory of Puducherry. Puducherry also has very good medical infrastructure and advanced hospitals in its main district. A red faced Shailaja then went on twitter to apologise for her mistake.

Given such utterances, and the virulent hate harboured by communists for rest of Bharat especially the ‘cow-belt’ states, Communist separatist tendencies will only grow stronger as Kerala is the last state of Bharat still under their repressive rule. They have infiltrated most Malayalam news channels with help and funding from so-called seculars and closet-jihadis. Communists may be atheists but a majority of the population in Kerala are still strong nationalist Hindus who believe in our Hindu Gods. The Communist government of Kerala and its cheerleaders pose a real danger to the integrity of the nation.