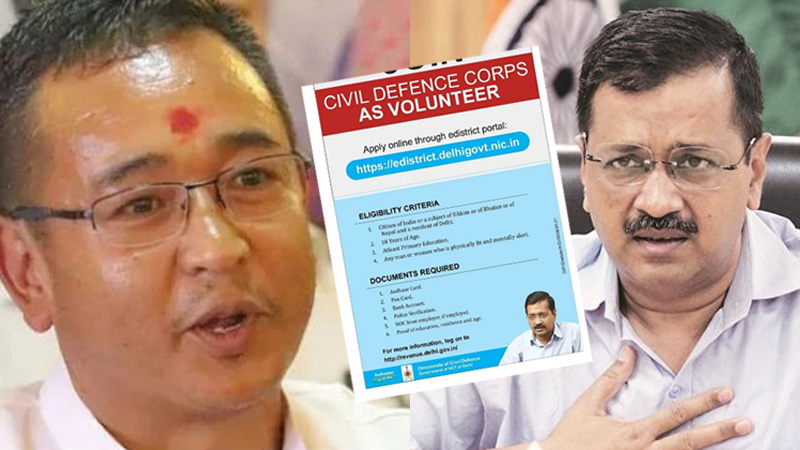 The state government of Sikkim has objected to an advertisement issued by the Arvind Kejriwal led Delhi Government for showing the 22nd state of Bharat as a separate country. In a letter dated 23rd May 2020 SC Gupta, Chief Secretary (CS), Government of Sikkim, addressed to Delhi government’s CS Vijay Kumar Dev requested the Delhi government to immediately withdraw the offensive advertisement while adding that the advertisement has hurt the sentiments of the people of Sikkim who take pride in being citizens of Bharat ever since Sikkim merged with Bharat on 16th May 1975.

Sikkim Chief Minister Prem Singh Tamang also expressed his condemnation by taking to Twitter and asking the Delhi government to rectify the issue. He pointed out that Sikkim has been a part of Bharat since 1975. While pointing out that it was only a week ago that they celebrated their ‘State day’, he took offense at Sikkim being mentioned alongside Nepal and Bhutan as an independent nation.

This advertisement published by the Delhi Government in various print media mentions Sikkim along with countries like Bhutan and Nepal. Sikkim has been a part of India since 1975 and celebrated the State Day just a week ago.

Sikkim is a part of India and should not be sethis is condemnable and I would request the Delhi Government to rectify this issue.@CMODelhi @AamAadmiParty pic.twitter.com/VmLiGPqOew

In an advertisement issued in all leading newspapers on 23rd May 2020 for recruitment of ‘Civil Defence Volunteers’, the Delhi Government had mentioned Sikkim as an independent nation along with sovereign countries like Nepal and Bhutan. It is worth mentioning here that the people of Sikkim opted to completely merge with Bharat in a referendum held in 1975 and that is how the Sikkim became Bharat’s 22nd state.

In a similar mischievous move that encourages separatist mind-set, Kerala’s leading news channel and Communist-leaning Asianet News promoted a Sustainable Development Index (SDI) report mentioning Kerala as a separate country. The intention clearly seems to be to challenge Bharat’s sovereignty. A Bharatiya channel propagating such views is dangerous but this isn’t the first time Asianet has been caught on the wrong foot. Earlier too, they were briefly banned for telecasting fake news in connection with the Delhi riots.

Such mischief be it by state governments or media outlets doesn’t augur well for the sovereignty and integrity of the nation and must be dealt with in all seriousness.