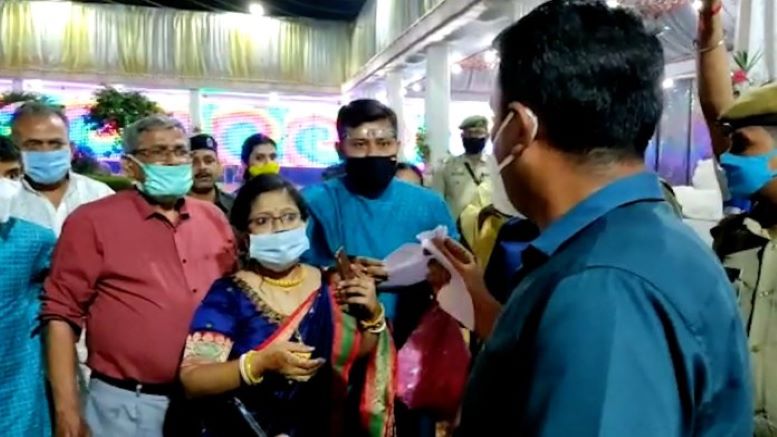 Tripura West DM (District Magistrate) Dr. Shailesh Kumar Yadav was seen displaying arrogance typical of many in Bharat’s babudom when he raided a Hindu wedding in Agartala where all permissions had been obtained and close family members only were involved. The DM even assaulted the priest conducting the wedding and man-handled the groom calling him an idiot, while shouting at the guests to get out. He ordered police to threaten guests, including women and children, with lathis to drive them out. The wedding guests, including women, were arrested post mid-night and children as young as 9 were left in tears.

This is what Indian people go through on a daily basis – Covid or no Covid.
This ain't rule of law – this is colonization 2.0@PMOIndia @HMOIndia @BjpBiplab Will you take any action against this babu? pic.twitter.com/ktjUEhooM9

The incident took place at 11 PM in Agartala’s North Gate area at Manikya Court in Palace Compound. There are multiple clips which show the entire incident and the main can be seen on East Mojo YouTube channel.

The DM is first seen walking towards the marriage hall, accompanied by automatic gun-toting police. He speaks to someone on the phone “Open any news channel and you will see I am there.” At the entrance of the wedding hall, he tells his team “I became a doctor 25 years before him, when he wasn’t even born” probably referring to the bride’s brother who had obtained all the necessary permissions to conduct the wedding during Covid-19 restrictions.

Then he enters the wedding location with his posse of heavily armed police and shouts at everyone to get out. He tells a lathi-wielding policeman to not just threaten, but actually hit one of the guests, “Maaro…maaro isko… hit him bloody, as***le”.

Next he goes inside the hall and screams right in a woman’s face, “where is your mask?” “Maaro, maaro (hit, hit)” he continues exhorting his men. Children can be heard screaming in the background, as the DM shouts at women and other guests to leave the wedding hall. He then enters the room where the bridge and groom are seated and catching the groom by his neck, shoves him out. Later he is heard saying, “Take them to lockup.”

When a woman (probably the mother of the bride or groom) hands him the permission papers, he tears those up and throws the pieces in the air saying “Permission is for marriage, not for marriage beyond 10 PM. You people are educated.”

Entering the mandap  where the wedding ceremony was to be carried out, the DM slaps a saffron kurta clad purohit ordering him “bahar nikal (get out)”. As the elderly purohit is walking away, the DM kicks him and a policemen canes the man.

Then he narrates the various sections of IPC under which the wedding party will be prosecuted, to someone (media crew) recording his video. “They will all be arrested right now. I will also recommend government to suspend OC of West Agartala police station.” He then orders a policeman to count the guests. When the policeman hesitates for a second, the DM hits him on the shoulder and barks, “I am bloody your DM, ok! You.. saale, bloody you all are hand in glove with these people. This is my command as a district magistrate, count!”

When the family explains to the DM that 11.30 PM is the logno muhurat (auspicious time) for the ceremony, he says “Arrest this lady.. this is all nonsense you are talking about,” a clear slur at Hindu Dharma and Hindu wedding rituals. “Arrest this guy also,” he says pointing at an elderly dhoti-clad man.

The DM entered another wedding going on in an adjacent marriage hall, Gulab Bagan, and humiliated the groom and his family there too.

On the other hand, the bride’s brother Dr. Subhrajit Deb, a surgeon, took to Facebook (FB) against the DM’s high-handedness. He posted pictures of documents showing that permissions had been obtained from no less than the office of the DM. Importantly, the documents have the signature of the DM himself.  4 vehicle passes were also given to the wedding party with permission to move freely on 26 and 27 April.

“Is it illegal to follow Hindu marriage act in my state? Should we not follow the auspicious time (logno)? If we are educated fools sir, then its also uneducated behavior using un parliamentary language in front of a crowd! Its also inhuman to arrest kids and women at 1 am and taking them to police station when kids of 9 yrs age are crying!”, wrote Deb.

The above video shows DM Yadav berating Dr. Deb wagging his finger, “You please read (Section) 144 carefully. You seem to be an educated man, don’t talk like a bloody villager uneducated person.” When Dr. Deb replies, “Sir, don’t talk to me like this, I am a surgeon”, the DM catches him by the neck and says “You arrest this guy, obstructing public servant on duty.”

So not just is DM Shailesh Kumar Yadav punch drunk with arrogance over his post, he exhibits ugly classism dismissing Bharat’s entire 70% village population as inferior and ganwar (uneducated). Is it because they can’t speak English and use words like ‘bloody’, and can’t understand the colonial-era laws written in English? Is it any wonder that the poor in our villages dread approaching any government office and still lack basic public services, despite innumerable well-funded government schemes ‘implemented’ by such IAS babus?

IAS officer Somesh Upadhyay who said that Deb was his schoolmate also tweeted to condemn the DM’s unempathetic behavior. His tweet read “Subhrajit Deb was my classmate in school. He is also a Covid warrior who himself recovered from Covid. His sister’s biggest day was ruined due to an extreme lack of empathy on the administration’s part. The family is in shock and distress.“

The bride’s mother told media, “He pushed around and hit people. We will never forget the torture we have been subjected to. Never had we imagined that one of the happiest days of our life will take this bizarre turn.” She added that they were all detained for two hours that night by the DM and were released after the local police intervened in their support. The wedding rituals were completed later.

She also said that the bride and the groom have been traumatised by the events of the night.

The incident drew widespread flak on social media (SM) and five BJP MLAs have written a letter to the Chief Secretary demanding action against DM Yadav for his unruly behavior. Their letter pointed out the DM’s boorish behavior and also the fact that he had torn the permission letter granted by his own office.

Further, the letter noted that the DM had manhandled the officer-in-charge of the West Agartala police station and had threatened to have him suspended. The letter alleged that the family members & guests were taken to the police station following the incident and were released after being detained for a while. The MLAs sought an investigation in DM Yadav’s actions and demanded his suspension from service.

In the meanwhile, the Tripura West DM has issued an ‘apology’ for disrupting the marriage ceremony.

Babudom completely lacks empathy is a known fact and their high-handedness was seen once again in the behavior of Tripura West DM. But this isn’t a lone incident of IAS high-handedness. Dr. VK Goyal, Director of Delhi’s Panchsheel Hospital also recently spoke about how he was threatened by the DM office when he approached them for help after having exhausted all their resources.

Dr. Goyal said that he runs a 50-bedded hospital of which 40 beds are dedicated to treating Covid-19 patients. “We have been treating patients suffering from the virus since day one. However, now we are faced with a severe shortage of resources as the local vendor informed me that he receives his supplies from Ghaziabad and he has stopped receiving the same. I, therefore, approached the nodal and other administrative officers for help.”

Instead of helping, however, the DM office sent him a notice on 27 April at around 3 in the afternoon stating that Dr. Goyal had to arrange for oxygen himself by 5 PM failing which action would be taken against him under Disaster Management Act.

Readers may recall how a priest had been manhandled in Madhya Pradesh’s Rewa last year. HinduPost had reported then:

Pictures of a lone Hindu priest being thrashed on the ground of a temple with puja material scattered all around on the evening before Ram Navami surfaced on Twitter and went viral in minutes, creating huge outrage. The images showed the dhoti-clad pujari lying on the ground with a policeman pinning him down with a lathi (stick). Two policemen seen in the pictures were wearing shoes within the temple premises and had desecrated the worship altar and puja material, clearly disrespecting Hindu religious sentiments.

HinduPost had also highlighted how babudom still dwells in the colonial era. However, both the police and bureaucracy would never dare to try any high-handed behavior with ‘minorities’ lest they have to pay the price for the same. As Municipal authorities in Mumbai’s Nallasopara learned the hard way when they reached to shut shops that had opened for Roza despite the fact that lockdown has been imposed in Maharashtra and shops are allowed to operate only from 7 to 11 in the morning.

This is the harsh reality of the secular Indian state – colonial minded bureaucrats bully ordinary Hindus treating them as ‘uncivilized natives’, while adopting a low-key and placatory attitude with minorities.