On the eve of bhumi-poojan at Ayodhya, AIMPLB threatens Hindus, gives example of Hagia Sophia 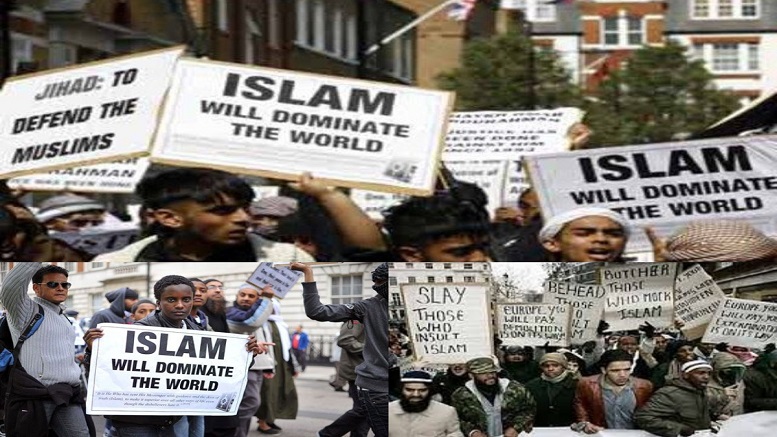 On the eve of the bhumi-poojan ceremony at the Ram Janmbhumi at Ayodhya, All India Muslim Personal Law Board has released a shocking statement. The non-governmental Muslim body, which claims to represent the interests of Indian Muslims, released the statement on Twitter on 4th of August, 2020. In this statement, AIMPLB threatens Hindus with future retribution.

The tweet contained a letter in Urdu with the associated text “#BabriMasjid was and will always be a Masjid. #HagiaSophia is a great example for us. Usurpation of the land by an unjust, oppressive, shameful and majority appeasing judgment can’t change it’s status. No need to be heartbroken. Situations don’t last forever. #ItsPolitics“

The tweet points to a dangerous line of thinking, that is shared by many Indian Islamists. The first sentence of the statement “#BabriMasjid was and will always be a Masjid.” directly negates the historical fact, proved by archaeology, that there was a non-Muslim structure below the Babri Masjid. The “Vishnu-Hari inscription” found at the site proves beyond all doubt that this structure was a massive Hindu temple dedicated to Bhagwan Vishnu. However the Islamists and their Marxist cronies have succeeded in deceiving the common Muslims into thinking that there as no temple below the disputed structure. Secondly, this statement directly contradicts the judgement of Supreme Court and asserts that they will not accept the judgement and for them, the communal interests of Muslims would always supersede the laws and even the interests of the whole country.

The second sentence “#HagiaSophia is a great example for us.” is at once a solace to Islamists and a threat to Hindus who rejoice over the reconstruction of Ram Temple. It is to be remembered that Hagia Sophia was recently converted into a mosque after more than 80 years of functioning as a museum. It was originally a Pagan worship site, first captured by Christians and then Muslims. The character of site changed as per the change in political power and demography. The threat should be seen in this perspective.

The sentences after that : “Usurpation of the land by an unjust, oppressive, shameful and majority appeasing judgment can’t change it’s status. No need to be heartbroken. Situations don’t last forever. #ItsPolitics” just reinforce the message and clarify the statement. As if the previous sentence was not clear enough, the last sentence makes it more clear that with favorable situation, Muslims will snatch back the site and make a Masjid there! In short AIMPLB threatens Hindus with dire consequences in future.

Similar sentiments were expressed by Muslims after the verdict in Ayodhya matter. In a video, a Muslim man is heard saying “We will take revenge when we regain power. It might take even 50 years, but the day will certainly come.”

AIMPLB was founded in 1973 to ensure Muslim personal law in Bharat remains frozen in time and continues to follow sharia (Islamic law). This Islamist organisation even supports inhuman customs like Triple Talaq and Nikah Halala – triple talaq is banned even in fanatical Islamic nations like Pakistan and Saudi Arabia! They have already issued a warning to courts and legislature against any move to ‘impose’ UCC (Uniform Civil Code).

The Islamist dream of world domination is not new. Indeed, Hindu temples were broken and mosques constructed on these sites to show their power and domination. Today’s Muslims may be shy to accept this, but the contemporary historical records written by Muslim historians narrate such episodes with great religious fervor and happiness.

The dreams of world domination and indeed, the belief that Islam will dominate the world is very strong among Muslims. Many believe in the prophesy of Ghazwa-e-Hind, according to which Bharat will be the last bastion of non-Muslims and Islamic victory over Bharat will signify world domination of Islamists. Indeed, it is believed that the people involved in invasion of Bharat will be assured of a place in Islamic heaven.

It should be realized that military victory will not lead to Islamist world domination. Islamists have won no major victories in last 250 years against any country in the world. The great Islamic empires of Mughals and Ottomans are dead and buried and radical Islamic terrorism has achieved its political goals only in Muslim majority countries.

The conquest this time is likely to be demographic. Islamists are likely to snatch power democratically in many parts of the world. We recently wrote on how Kerala is likely to become a Muslim dominated state within the next 1-2 generations. The gap between fertility rate of Muslims and Hindus will bring about similar results all over the country. Small Islamists enclaves are likely to the next big internal security issue in the medium term.

The statement by AIMPLB reflects a deep issue within Islamist psyche. How we will deal with this threat is something to think about. No government serious on internal security can accept such a brazen challenge to court verdicts and open threats to Hindu majority. Hindu society itself may have to rethink its survival strategy in face of Islamist demographic conquest.