Will Hindus of Kerala become a minority within the next generation? 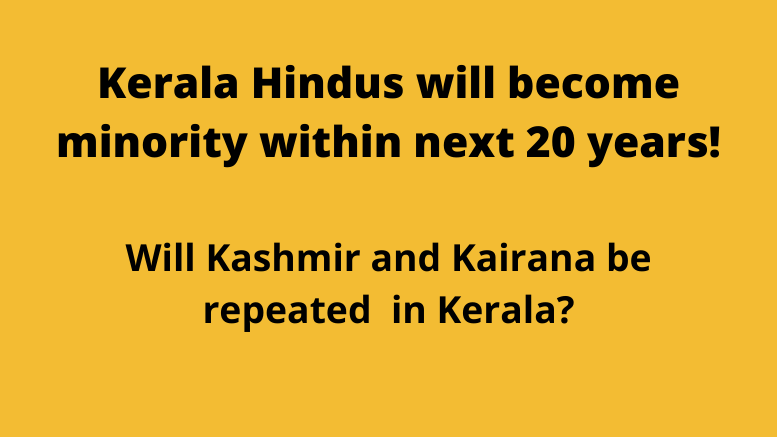 In recent years, Kerala has emerged as an Islamist laboratory where different models to achieve the victory of Islam have been tested. The success has been beyond the wildest dreams of the Islamists and are a danger to Hindus of Kerala. We talk about two such models in this article, that have ensured that Islamists will achieve demographic dominance within next 20-30 years in Kerala.

The Special Marriage Act of 1954, basically allows inter religious and inter caste marriages in Bharat without any rites or ceremonies. The bride and the groom fill in a specified form (Notice of Intended Marriage) and file the same with the local Marriage Registrar. In Kerala, the Registrar then publishes the same online in the form of a notice. This is to let the public know and if there are any objections (like wife of an already married Hindu man), they can raise the same. If there are no objections within 30 days, the  Registrar solemnizes the marriage in the presence of three witnesses. Certain conditions like age of consent (groom 21 years and bride 18 years in case of non-Muslims), mental capacity, prohibited relationship (e.g. father marrying his daughter) etc are verified by the Registrar. It is known as a register marriage or court marriage in Bharat.

On the 24th of July, the office of G Sudhakaran, the Kerala Minister who also holds the Registration portfolio issued a notice. It mentioned that the ‘Notice of Marriages’, which used to be published online (for 30 days) on the department website, will not be uploaded anymore. All further notices (hardcopies) would be pasted on the notice boards attached to each Registrar`s Office. This order comes at a time when Digital India is in full swing and the public is being encouraged to go online for all govt work. Also remember, this is the time of COVID pandemic and people are wary of going to crowded places like registrar’s offices. Clearly, the govt is trying to hide something, but what exactly? 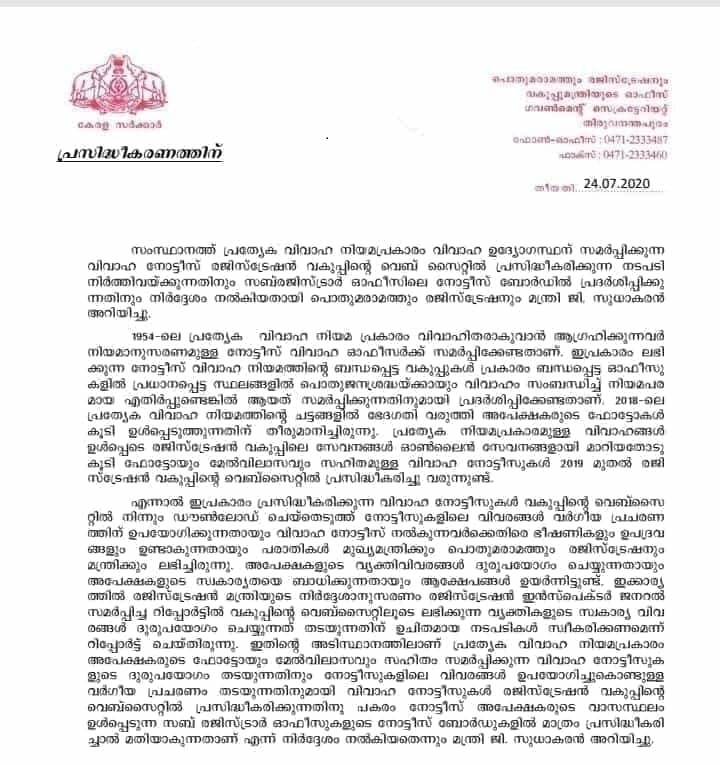 The reason given by the govt is that online notices were being downloaded and the details were being used for communal propaganda and to threaten the applicants. It added that this was also an invasion of privacy of the concerned applicants.

The real reason was brought forward by study of the applications. A majority of notices available as of now (filed this month) showed a familiar pattern. The girls were in the age group of 18 to 25 and almost all of them of them were Hindus and a few Christians. The grooms, meanwhile, were all Muslims and were either construction workers or farmers. How the illiterate and financially poor Muslims got time and resources to woo Hindu girls is another interesting story.

Allegedly, unemployed Muslim youth are being picked up by organized Islamists and trained to convert Hindu girls under the pretext of ‘love’. Apparently, the grooms are also provided financial reward for the same. This has been claimed by not only Hindutvavadis, but also Christian Churches in Kerala and has even been accepted by the High Court.

In extreme cases, the highly radicalized new converts have set off to join terrorist groups like ISIS! The level of radicalization of Kerala Islamists can be gauzed from a recent United Nations Security Council report  on terrorism that revealed that Islamic State(Hind Wilayah), the local branch of ISIS in Bharat, has 180 to 200 members in Kerala and Karnataka. There were also previous reports of such recruits from Kerala being killed while fighting for ISIS in Iraq and Afghanistan and many of the women who joined were new converts to Islam.

Conversion via this method is happening at an unprecedented scale in Kerala. The government order would actually end up hiding facts and shroud such conversions in secrecy. It also raises a more serious social issue. Are there Muslim gangs grooming Hindu girls? How else would one justify the fact that hardly any Hindu boys were marrying Muslim girls. Clearly this is an organised activity to provide a one way route to Islam for Hindu girls.

The Muslim population share in Kerala in 1901 was 17.3% which reached 26.6% by 2011. Hindus meanwhile dropped from 68.9% to 54.7% during the same period. The birth rate of Hindus in 2015 was 42.87% of all births while Muslim share was 41.45%. The very next year the number of births by Muslim women and Hindu women for the year 2016 were 21,1182 and 20,7831 respectively! In 2019, amongst all the newborns, Muslims were 43% against Hindus at 41.71%. If we talk about Total Fertility Rate i.e. the average number of children a woman is likely to have between the ages of 15 and 49, Hindu TFR is 1.3, while Muslim TFR is 2.8 in Kerala! On average, a Kerala Muslim woman has more than twice children than a Kerala Hindu woman. Please note that this does not even include births by women below 15 and above 49 years of age. Among Muslims of Bharat, child marriage in not illegal and a large number of children are born in both these age groups.

Clearly, within next 20 years, Muslims would easily overcome the Hindu population amongst the younger generation. In the next 20, they would probably be a majority. The gap in TFR makes this an inexorable reality! Will God`s own country become another version of Kashmir, perhaps called “Allah’s own country”? And here we have not even considered the percentage of Christians who were 18.38% of total population in Kerala as per Census 2011.

Now, this is not restricted to Kerala itself. On national level, the fertility rate of Muslims is 25% more than that of Hindus. In the wider world, Muhammad is now one of the most popular baby names, even in US and UK! But in Kerala, Hindus are in imminent danger of being reduced to minority.

The attitude of Kerala government

The attitude of Kerala govt towards these conversions is typical of communists. The minister for Registration, Sudhakaran, is an atheist and has a history of Hinduphobic rants. He was seen insulting temple tantris publicly by asking them why they come bare chested and in dhotis without wearing underwear, to temples. How he checked whether or not they wear underwear is still unanswered!

Previously, when the Communists tried to send unscrupulous Muslim women to the Sabarimala Temple, after the SC judgment, the tantri had said that if such violations take place, he would close the temple. The CPM government had tried in vain to send Rehana Fathima, the infamous activist currently in jail in a POCSO case, by giving her police protection. Sudhakaran at that time publicly insulted the tantri by saying that the tantri had no affection or devotion to Sri Ayyappa. He added that it’s the donkeys that carry loads to the temple that do maximum work with grace, thereby insinuating that the tantri was neither useful nor graceful.

History has taught us what happened in places where Hindu population has dropped. In Afghanistan, it dropped for centuries until now that it is devoid of any Hindus. In Pakistan, the Hindu genocide continues. In Kashmir, the infamous exodus of Kashmiri Hindus is a recent memory. In Kerala itself, the Mappila riots, of 100 years ago, included genocide and forced conversion of Hindus.

Will Hindus of Kerala be driven out to stay as refugees like the Hindus of Kashmir? The answer to this will be determined by what course we as a society take today.