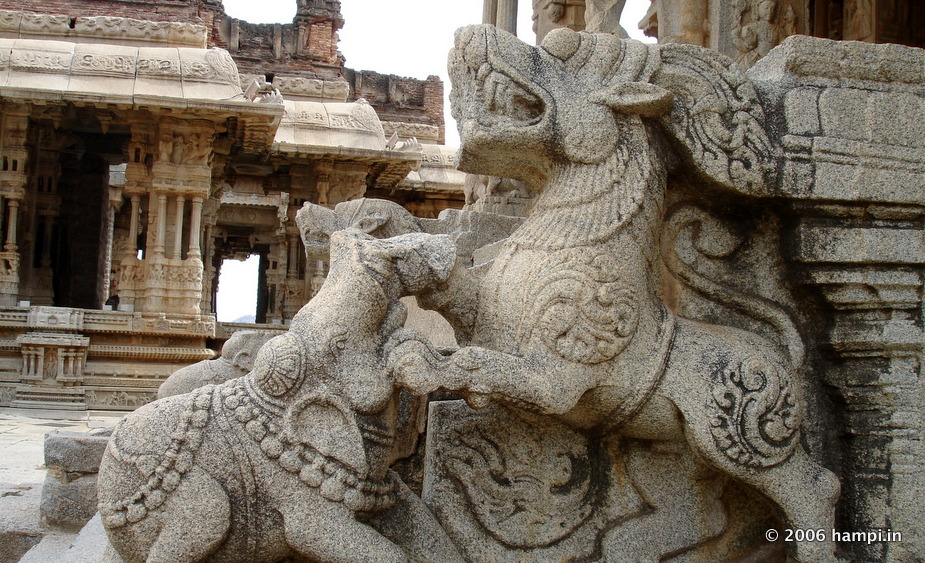 The southern states of medieval Bharat have always eluded from the havoc of Islamic terror because of the timely rise of many empires which served as the savior of Hindus. One such empire which is considered as the greatest among all these empires which stood for Sanathana Dharma keeping the Islamic rule at brink for virtually three hundred years is the Vijayanagara empire.

When one speaks of Vijayanagara empire, the only famous emperor which comes to the minds of people is Krishna Deva Raya. But the empire was blessed with many more able emperors who have been completely forgotten in the memories of people. One such emperor is Venkatapati Raya whose life size statue is found at the Venkateshwara Swami Mandira at Tirumala along with those of Krishna Deva Raya and his brother Achyuta Deva Raya.

The common view of many historians is that after losing the Battle of Talikota, which involved the betrayal of Aliya Rama Raya by the moslems who served as his own bodyguards which resulted in his murder by Bahmani Sultans for uttering the words “Narayana Krishna Bhagavanta” (Read more about Rama Raya here) on being asked to convert to islam, the empire was continuously on the backfoot which led to its destruction some eighty years later.

But many seem to ignore the glorious rule of Venkatapati Raya whose timely rise and struggle for forty years prevented the Islamic rule from prevailing in Dakshin Bharat and delayed the complete vanquishment of the empire which proved to be valuable because of the timely rise of Chhatrapati Shivaji and his Maratha empire after the destruction of Vijayanagara empire and continued to serve the cause of Hindus.

Venkatapati Deva Raya was coronated as the emperor of Vijayanagar empire at Penukonda which served as the capital of the empire as a result of the eradication of the historical city of Vijayanagara after its defeat in the Battle of Talikota, by his Rajaguru Sri Lakshmi Kumara Thatthacharya after the death of his elder brother Sri Ranga Raya. The empire was at a very weak state during his coronation and many were predicting its death in a few years. The Nayaks who served as the governors of the state in the empire had lost their vision for Hindu unity and proclaimed independence for their selfishness, thus destroying the very foundation of the empire.

Immediately after his coronation, he crushed the revolts of many Nayaks and imprisoned the Nayak of Gingee who led the claim for independence of the Nayaks. Soon he invaded the territories of the empire held by the Golkonda and Bijapur Sultanates and captured some of their territories. Qutb Shah, the then Sultan of Golkonda sent a vast army against Venkatapati, thus driving him back to Penukonda.

Venakatapati then sought for a peace treaty with the sultan making him happy by the thought that the newly captured territories will be returned to him. But the Emperor proved to be a mastermind in strategy and made the Fort of Penukonda, which was defenseless, to almost impregnable within the three days he got by seeking negotiations. The sultan understood his mistake and commenced the siege on the fort but it was of no use as the Dharmic forces of the empire inflicted heavy losses on the army of sultan and drove him away from the fort.

The sultan’s army retreating to Golkonda was ambushed by the Vijayanagara forces led by Venkatapati himself on the banks of the river Pennar, killing around 50,000 moslems and making the river red by the blood of invaders. This was the first decisive victory for the Hindu forces against the marauders after the Battle of Talikota and the fear of the presence of a strong dharmic empire prevented the sultans from torturing the Hindus in their sultanate.

The army of sultan was losing a battle every other day while on this disastrous recede. The chieftains who ruled to the south of river Krishna revolted against Qutb shah and joined the cause of Vijayanagara. The Golkonda forces were also involved in defending their kingdom against the Mughal forces in the north. This split worked in favor of Venkatapati even more as he prosperously crossed river Krishna and captured the coastal lands upto Kasimkota and Palkonda.

The Sultan of Bijapur, Adil Shah attacked the Kanarese districts and besieged Penukonda. But Venkatapati crushed the forces of the sultan and made them recede to Bijapur. During this recede, he was also successful in capturing the rest of the territories of the Vijayanagara empire which were captured by the Sultan of Bijapur after the subjugation of the empire at the Battle of Talikota. Thus, Venkatapati was successful in extending the borders of the empire and ensured that it was at the peak of its strength without any annual jihads similar to the reign of Krishna Deva Raya and the empire which was in tatters during his coronation was given a new life.

In 1601, Venkatapati crushed another revolt of the nayaks which was led by Lingappa Nayak of Vellore and Tirumala Nayak of Madurai. Venkatapati beheaded Lingappa Nayak in the battle and took direct control of the Fort of Vellore which later became the capital of the empire in his reign because of its strong base. Thus the fortunes of the empire which was disintegrated and nearing its destruction was changed single handedly by this able emperor.

Venkatapati Deva Raya was not only an able administrator but also a staunch follower of Dharma and took pride in calling himself as protector of the followers of Sanathana Dharma. This nature of the emperor is clear from his words spoken to the ambassador of Akbar who visited Chandragiri. When Akbar was expected to invade the Deccan plateau, Venkatapati replied to the ambassador of the Mughal emperor by saying, “I will not kiss the feet of a Mohammedan” and was preparing for a war against the Mughal empire without worrying about the strength of its forces instead of thinking about surrender.

The civil war, which broke out because of the hunger for power among various members of the royal family of the empire, weakened the empire again and made all the efforts of the great emperor in vain resulting in its total vanquishment thirty years after the death of the emperor. Thus we end this article with a sad note that the able emperor who prevented the Islamic terror from spreading in south Bharat like the northern parts, and helped in preserving its culture is completely forgotten in our memories and words.

(Note: This article first appeared here at and is republished here by the same author)

Hindu resistance: Bandh in Bengaluru today as locals resist playground being usurped by Waqf Board