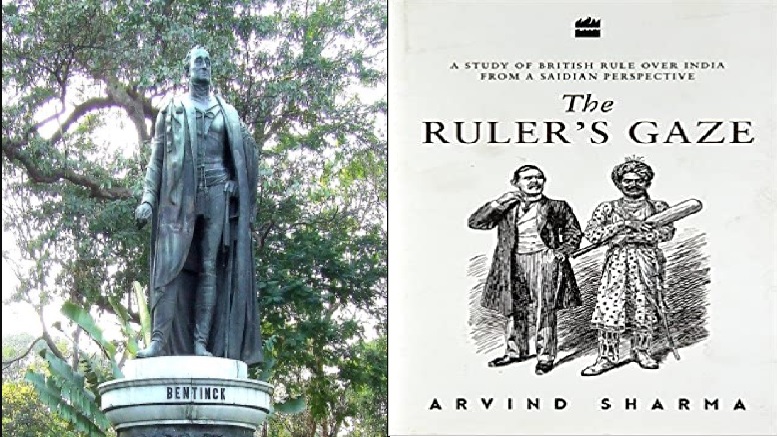 The most effective way to destroy a people is to deny and obliterate their own understanding of their history.

Knowledge  and power are two sides of the same coin. In  a scholarly and rigorous analysis of sati or the practice of widows immolating themselves, well known  scholar and author  Shri Arvind Sharma, focuses the Saidian lens of Orientalism on British depiction of the practice of sati. The gross distortion  and  misrepresentation of the discourse around sati, still lingers as a difficult-to-dislodge colonial relic, thanks to absolute internalisation by Macaulay’s children, long after the sun had set on the larger than life British empire

Context matters. In letter and spirit. Life, then, is a matter of perspective that is dependent on the lens we use to gaze  at the object of our enquiry. If we overlook this non negotiable axiom in our  pursuit   of truth,  we get a distorted image that is skewed to serve the interests and agenda (explicit and implicit) of those in positions of power who commission  knowledge production. The question then is: Whose knowledge is it anyway? And who controls the narrative? Is Western universalism the absolute prism through which to view cultures and people  who are therefore made to “fit” a  Euro-Anglo centric perspective?

Since the last few years, my personal  journey as a sadhaka or seeker on a sacred quest, has  slowly   but surely enabled me to confront and engage with my own colonization and  insidious internalization of colonial narratives. I am gradually detangling the warp and weft of colonisation. Doing so is also enabling me to  reclaim my decolonised  self  by engaging with several inconvenient  truths and being able to see them with fresh eyes.

The Ruler’s Gaze: A study of British rule over India from a  Saidian perspective by  Arvind Sharma, helped me place several issues, particularly, sati, in a refreshing de colonized perspective.  Formerly an IAS, Arvind Sharma is the Birks Professor of Comparative Religion in the School of Religious Studies at McGill University in Montreal, Canada, and has published extensively in the fields of comparative religion and Indology.

In The Ruler’s Gaze, the erudite  Arvind Sharma braids  Orientalism, the well-known Palestinian academic Edward Said’s pioneering  work in Cultural Studies, as the template for his  book.  Said, an outspoken  critic of Western scholarship of the East, called out this  distorted gaze of Western scholars to imagine the East as “exotic, backward, savage and uncivilised.” In addition, Sharma highlights the Saidian perspective that  the production of cultural knowledge about a subjugated people is  never an objective process as it  was made out to be, but a “product of insidious imperialism: that was the driver of the knowledge. Sharma takes it a step further and situates the Saidian thesis in the colonial contextuality of British India.

Sharma, references and locates  several well-known incidents in Bharatiya history in his attempt  to unpack and reveal the ‘truth’ behind the fabricated versions of these stories that have been told  through the colonizer’s gaze and internalised by the colonised as  irrefutable truth. For instance, he demystifies the Black Hole of Calcutta, sati, infanticide, thugee, illiteracy, poverty, and Islamic and British rule itself—through a Saidian lens.

Until Edward Said, the term Orientalism denoted a study of the Orient (East) and was used academically  in a neutral or positive sense.  However, Sharma, adds that  post publication of Orientalism, the term  acquired a negative connotation  because the Saidian thesis held that “such knowledge of the Orient was vitiated from the stance in which it was produced and was deeply influenced by value judgments that informed the discourse.”

According to Sharma, the “epistemological core of the Saidian thesis was that  the production of knowledge cannot be viewed independently of the power equation inherent in the production of such knowledge. Saidian Orientalism almost inverts the Baconian maxim ‘Knowledge is power’ into ‘Power  is knowledge.’ Thus, the conditions under which the knowledge is produced cannot  be divorced from the nature of the knowledge which was produced,” writes Sharma.

In this piece, I will focus on the relationship between power and knowledge  with regard to the British depiction of Bharatiya (Indian) society, particularly the custom of sati or widows burning themselves after the death of their husbands. According  to Sharma, the British depiction of Bharatiya society as savage, uncivilized and  barbaric was  an important justification for British rule in the country.

Meanwhile, three significant political  developments such as the transition of the East India Company that was originally a trading outpost for the British empire to the centrality of the British crown in the governance and administration of   the British colony, Thomas Babington Macaulay’s infamous ‘Minutes of Education’ and the Charter of 1813  that incorporated Christian missionary evangelisation in the Company’s territories (in contrast to the non-interference in the religion of the people adopted by the East India Company) set the tenor and pace  that controlled and informed the discourse of knowledge creation – the Us vs. Them dichotomy, with the former perceived as superior to the latter in every possible way.

Taking sati as a classic example, Sharma explains how it was an exemplar of the “relation between power and the projection of virtue.” When the British unequivocally emerged as the numero uno power in the country in 1818, it resulted in  several tangible instances of power play and meddlesome interference in the customs and traditions of the  “natives.” Ironically, the British had formalised sati in 1813 and then in a dramatic U turn abolished  it in 1829!

‘Lord’ William Bentinck, the British viceroy who abolished sati, explains, “When we had powerful neighbours and had  greater reason to doubt out own security, expediency might recommend an indirect and more cautious proceedings. But now that we are  supreme, my opinion is decidedly in favour of an open, avowed and general prohibition.”

Peering through  the Saidian lens, Arvind Sharma offers a tele and wide angle view of the deliberate distortion in knowledge production around  the practice of Sati.  He argues that  in the initial years, the British were happy to ignore cultural practices such as Sati. However, once their had established their political and military supremacy, these became integral to their “civilizing” mission bolstered with their inherent and unfounded notion of moral and intellectual superiority over the so-called “heathens.”

Lord William Bentinck, who spearheaded the Abolition of Sati Act (1829) had a larger than life statue of himself erected in the Victoria Museum, Calcutta. The  commissioned statute shows  him dramatically rescuing a young Indian woman from the funeral pyre. The factual inaccuracy is especially startling since women who committed Sati were usually above 40 years. In addition, the image was highly sexualised and blended with violence.

Thomas R. Metcalf  is a historian of South Asia, especially colonial India, and of the British Empire. Metcalf, who is the Emeritus Sarah Kailath Professor of India Studies and Professor of History at the University of California, Berkeley, writes on Sati:

“Despite its infrequent occurrence, the fascination for this event is not surprising. With its immolation of a living woman in a raging fire, sati, even more than the public execution, catered to the English obsession with death as a spectacle. In the British imagination, the scene was also highly sexualised. It was easy as well to conceive of sati as emblematic of much that was wrong  with Indian society. Whether the widow walked by herself into  the pyre or was pushed from behind by relatives, the act of sati represented the Indian woman as the helpless victim of a bloodthirsty and superstitious faith. India, sati seemed to say, was at once an exotic and barbaric land.”

The book documents her extensive research that  in pre-British India, widows were generously supported through revenue-free lands granted  by local rulers, Hindu or Muslim. When the East India Company usurped the right to collect revenue, it began to cancel all eleemosynary (relating to or dependent on  dana or gifts) allotments of this kind to maximise its profits.  In retaliation, widows  died of sati, which was a form of cultural protest against the arbitrary policy of the colonial rulers which smacked of cultural insensitivity.  Not so incidentally, most widows who died of sati were middle aged, and had outlived their husbands by several years. Hence the British decided to ban sati.

“If these facts are kept in mind, then, the act of abolition of  sati, far from being a humanitarian act, begins to look more and more like a cover up of commercial rapacity,” writes Chatterjee, in what is a blatant instance of colonial exaggeration and gross misrepresentation. The scale of sati, from being  isolated instances, seems to have exponentially increased in 18th century British  India.

“This lends credence that  the presence of the Raj had aggravated the ills it claimed to be remedying. It was also an attempt to link the evil of sati to Hinduism and to blacken it, so that the shield of the knight in shining armour would shine brighter against that background.  In the case of sati, the use of the regional variation as evidence that sati  was a localised, secular phenomenon and not a universal religious one never gained traction.  Sati was thus identified as a Hindu superstition in keeping with the missionary discourse,” writes Arvind Sharma  as he attempts to reverse and invert the colonial gaze, exorcise colonial demons and reclaim our  cultural narratives  through the insider’s gaze.