Myths about Kashmir #4: Nehru “promised plebiscite at the UN” 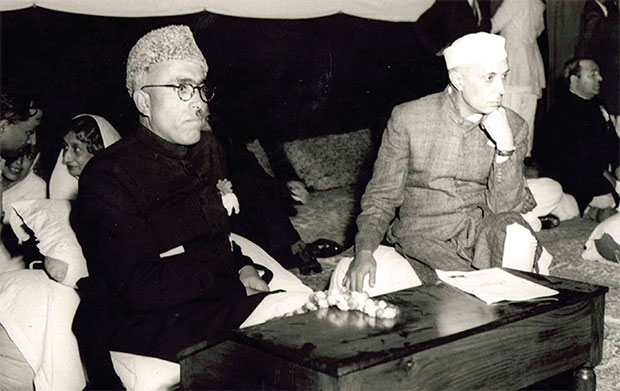 This myth is repeated ad nauseum by both the Pakistani leadership, and their proxies in Bharat—namely the Kashmiri separatists such as the Hurriyat, JKLF, Hizbul Mujahideen, as well as various hues of leftists who claim to be concerned about the human rights of the Kashmiri people.   We will see in this article that there is a deliberate omission of the most crucial aspect of Nehru’s policies on Kashmir.

In order to proceed, let us ask ourselves what it means to say that “Nehru promised Kashmiris plebiscite at the UN” which is the form (or slight modifications thereof) used in numerous TV debates, newspapers etc.  What does it mean to say a leader “promised something?”  As we shall soon see, this is as meaningful as saying that a person “was crawling.”  It is true that every person crawls when they are babies, and then they start walking and do not crawl again thereafter.  Something similar is true about this myth.

If we parse our own implicit assumptions, the myth seems to imply that “Nehru promised plebiscite, but later Bharatiya leaders did not honor that promise.”  THIS statement is absolutely false!

Nehru was Prime Minister of Bharat from 1947 to 1964.  It is true, and recorded many times, that Nehru was committed to a plebiscite from 1947 to 1953.  However, Nehru then changed his policy starting 1954, till his death in 1964.  In other words, out of the 17 years that Nehru was Bharat’s PM, he was committed to plebiscite only for the first 6. For the last decade of his leadership, his stated position was that plebiscite was no longer an option.  We will go into the “why” of this policy later, but for the purposes of this article, it suffices to note that Nehru himself came to the conclusion that plebiscite was not a practical option in the last decade of his leadership.  Therefore, it is not as if “Nehru promised plebiscite, but later Bharatiya leaders did not honor that promise.”

Surely, a political leader is allowed to change and modify his policies as situations change.  In this particular case, it was Pakistan’s signing the 1954 US-Pakistan defense treaty that changed the ground situation.  Is a leader of a nation not allowed to react and change his policies in response to such major realignments of security interests in his region?  Indeed, making such prudent changes is PART of his role as the nation’s leader.

Let us end by observing how this sort of “lie by omission” is used by separatist leadership.  I will go to the page on Hizbul Mujahideen’s website that devotes considerable amount of attention to this issue. Since the Hizbul website devotes so much space to this—one of their central arguments to show that Bharat acted “dishonestly”—I will scroll down to the last mentioned “promise” on the page. The last claimed “promise” is too vague, it is not a promise to plebiscite, which means the last reference made by Nehru on plebiscite and the UN resolutions was in 1954.  In this promise, he states clearly that it is the other side that is making the fulfillment of the promise difficult (he is referring to Pakistan’s refusal to comply with the UN pre-conditions for plebiscite, which included withdrawing all its forces from Gilgit-Baltistan and PoK).

The Hizbul cleverly conceals the fact that Nehru, for the better and (significantly) later part of his own prime ministerial tenure, had rejected the plebiscite option as no longer viable in light of the dramatically changed security conditions in South Asia by 1954.  It is very important that we realize that Nehru did NOT continue his commitment to plebiscite in the last 10 years of his prime-ministership.

In the next article in the series, we shall see on whose shoulders lies the blame that till 1954, plebiscite was unable to be held.