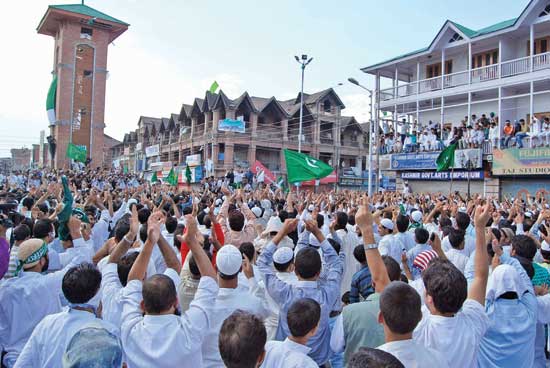 This is the first in a series of articles on Kashmir. This series was motivated by the current spike in turmoil in the valley and the highly evocative video images that have shaped public imagination about it in recent days.

Myth 1: The current problem in Kashmir started in 1987

A statement bandied about by several writers is that the starting point of the disaffection of people in Kashmir towards Bharat was the election of 1987. This election is supposed to have been rigged by the Congress-National Conference, and led to people becoming disillusioned with Bharat, and its central government.

However, the above assertion is absolutely and provably false.

The first time all of Bharat witnessed the strong anti-Bharat and pro-Pakistan sentiment in the Kashmir valley was much earlier—in 1983.

In that year, the Bharatiya cricket team had just won the world cup, in arguably the greatest upset in cricket history till then. They had beaten the seemingly invincible West Indies at Lord’s in the world cup finals.  Following this victory, they were hosting the runners up the West Indies at home for 5 ODIs and 6 test matches. The first ODI was to be held at Srinagar – the first international match there. To the great surprise of both the Bharatiya and the West Indian players, the crowd constantly jeered Bharat and cheered the West Indies. Not only that, pro-Pakistan slogans were raised, which was all the more telling given that Bharat was not playing Pakistan.

I distinctly remember the jeering—it was of the low kind. For example, when then Bharatiya captain Kapil Dev removed his sweater during his bowling spell to hand over to the umpires, the crowd jeered the way rogues in a gully would jeer a disliked pehelwan who was striking his pre-fight pose. Every boundary scored by the West Indies was cheered to high heavens. Bharatiya fielders were heckled at the boundary.

These incidents were recorded by Sunil Gavaskar in his book Runs ’n’ Ruins:

“Being hooted at after a defeat is understandable, but this was incredible. Moreover, there were many in the crowd shouting pro-Pakistan slogans which confounded us, because we were playing the West Indies and not Pakistan.”

Gavaskar’s surprise also belies the same assumption that all of us had—that our victorious cricket team, that had been feted everywhere, would also be feted in Kashmir as “their” heroes.

Furthermore, a segment of the crowd invaded the pitch during lunch break and damaged it by digging, to show their protest against Bharat (incidentally, these diggers were acquitted of any wrong doing relatively recently, in 2011!).

All of the above was telecast live on Doordarshan TV.

I must confess that most Bharatiyas of my generation was quite stunned to watch this, since we had always thought of Kashmir as just another state of the union—one that our movies showed to be beautiful, and whose people our movies portrayed as nice and honest (Kashmir ki Kali, anyone?).  I think I can say with confidence that the average Bharatiya back then had no idea of the amount of hatred and resentment that Kashmiris felt towards Bharat.  The popular story was that the average Kashmiri had helped our army against Pakistani raiders in 1947, and that was enough to prove to us that he “felt Bharatiya.” Besides, that was settled history as far as we were concerned.

All the events described above were back in 1983! Well before the rigged election, before the start of organized militancy, before the exodus of Pandits, and before the large-scale entry of Bharatiya security forces into the valley. It would suggest that experts should rethink their chronology for the Kashmir problem honestly.

The problem has been, and continues to be, that the Kashmiri Muslim has never felt Bharatiya, and has always felt far closer to his or her co-religionists in Pakistan than to majority Hindu Bharat.  In short,  Kashmiri separatism is simply another instance of the Muslim separatism that resulted in the creation of a separate Islamic state called Pakistan.  To attribute it to events that can be blamed upon the Bharatiya state is highly misleading, since the separatist sentiment was widely prevalent in the state long before these events.