Myths about Kashmir #3: There is No Document of Accession of J&K to India available 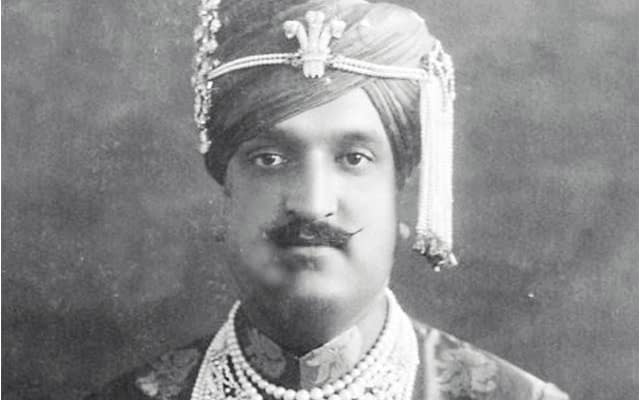 This myth is propagated by most pro-independence or pro-Pakistan groups in Kashmir valley. For example, below is this myth propagated on the website of the largest Jihadi terrorist group operating in the Kashmir valley — the Hizb-ul-Mujahideen. The reader may read it for themselves at the URL that is also part of the image below: The myth is stated in Hizb’s words below (emphasis mine):

The drama of so-called accession of Kashmir to India by Maharaja Hari Singh was staged by the Congress leaders in connivance with British Viceroy Lord Mountbatten, who was made the first Governor- General of India by Hindus to over see completion of partition plan to damage Pakistan. The mere fact that no document of accession is available with India or on UN record is proof of a combined plot that was hatched by Hindu leadership with their British well-wisher.

We can see clearly why this is critical. If Maharaja Hari Singh’s document of accession is not available, then it would give a strong impression that India enacted some kind of fraud by claiming that J&K state had acceded to it. These are matters of international law, and legal documents carry all the importance and validity in such matters.

So it is true that India does not have a document of accession signed by Maharaja Hari Singh?

The truth is that not only does India have a document of accession, duly signed by Hari Singh and accepted by Lord Mountbatten, but it also has a letter sent by Hari Singh to Lord Mountbatten explaining the accession, and the immediate catalyst for it, namely the aggression by Pakistani backed tribesmen into Kashmir. I will produce both here, the first in facsimile form.

First the document of accession, signed by Maharaja Hari Singh (page 2, which has the signatures). Next, here is the letter written by Maharaja Hari Singh, explaining in his own words, the situation that led him to sign the accession. It is available at many sources online, but I have picked jammu-kashmir.com since it has an extensive repository of documents related to J&K. 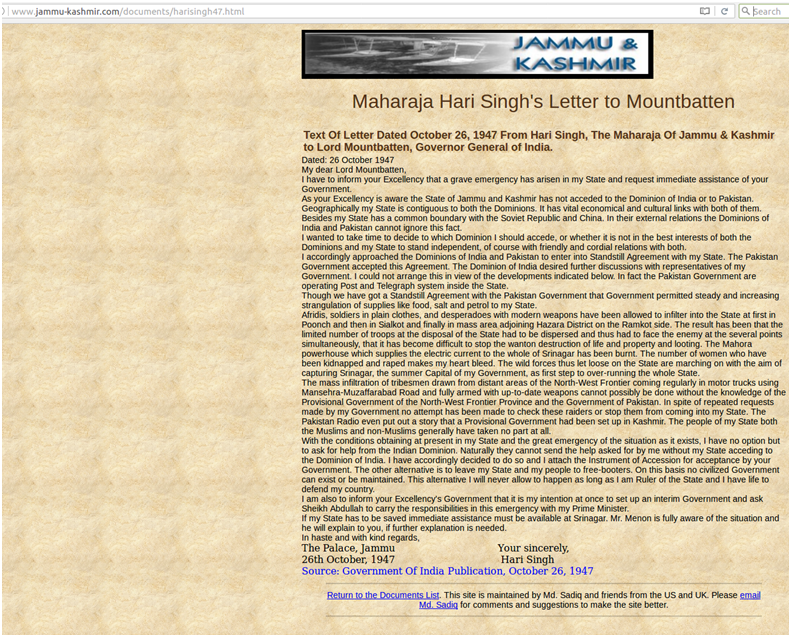 Since all the anti-India parties rely on this myth to question India’s legal position in J&K, it is important to note the following clearly:

1. The legal document granting India all of J&K state (including PoK and Gilgit-Baltistan) is available for all to see.

2. The reason the Maharaja had to expedite signing the document was Pakistani aggression. Hard as it may be to believe, Pakistan questions this accession on these very grounds! It is very rich for Pakistan to question the signing by pointing to a situation that they themselves created! Namely, they forced the Maharaja’s hand, and then they say “well, since his hand was forced, we cannot rely on his documents anymore”!

It was not India, but Pakistan that attacked the Maharaja’s princely state. Indeed, India did not even send troops to defend it till the state was legally made part of India by the Maharaja’s accession. So legally speaking, India is 100% in the right, and Pakistan 100% in the wrong. We will pick up this theme in the next article in the series.

We have used India instead of Bharat in this article at the author’s request because the piece talks about legal documents, and so we have to use the terms as they were used in legal documents related to Kashmir’s accession.