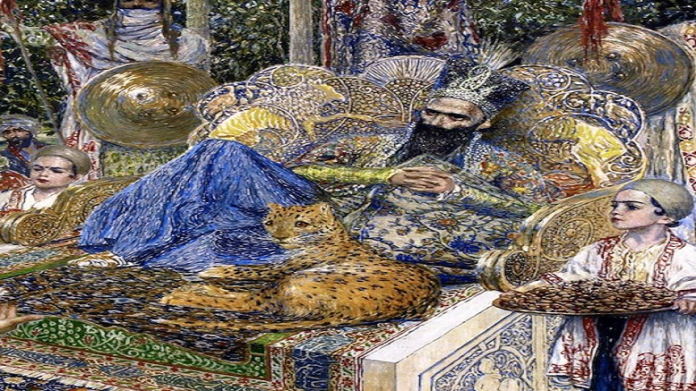 During the Islamic invasions, there were countless, nameless Hindus who put their lives at stake to defend our temples and deities.

In 1025 CE, the savage Mahmud Ghazni raided Gujarat, plundering the Somnath temple and devastating many sacred icons and temples.

The Tabakat-I-Nasiri by Minkaj-i-Siraj describes the earliest Islamic raids of Ghazni in detail including his attacks on Somnath. The book narrates a brief but fascinating account of a brave, unknown Hindu who played a role in the story.

Mahmud plundered immense booty worth 2 million dinars from Somnath and broke the Jyotirlinga into 4 pieces. The 1st piece to be buried under the masjid at Ghazni, the 2nd for the gateway of Mahmud’s palace and 3rd & 4th sent to Makkah and Madinah.

While returning from Somnath, Mahmud had to travel through the desert of the Great Rann of Kutchh to reach Sindh quickly. His army needed a local guide to take them through the dangerous terrain. One day, a young Hindu man showed up volunteering to be the guide.

Triumphant with his destruction of Hindu temples and flushed with the blood of massacring thousands of Kafirs, an elated Mahmud and his army set off with the Hindu guide leading the way. After they had marched all night and day, they decided to halt out of exhaustion.

The troops began the search for fresh water with the guide but could not find any even after several hours of looking in the scorching heat. Frustrated, Mahmud called the Hindu guide and asked him why hadn’t he found water yet, even after so many hours.

The intense heat and sunlight had parched the throats of Ghazni’s army. Further delay meant certain death. Slowly the Hindu guide bowed in front of the Sultan and lifted his head with a mysterious smile. Mahmud was enraged and asked him what was so funny.

Eyes flashing, the Hindu guide sprang to his feet and shouted out: “I have devoted my life for my God Somnath, and I led you and your army into the most dangerous part of this desert, so that you may never find water and die here as stinking carcasses to be devoured by vultures.”

Mahmud’s blood froze as he trembled with rage and immediately taking a sword to the Hindu’s head immediately beheaded him. His army was forced to wait all night until next morning. They eventually did find water but not before several of Mahmud’s troops perished like flies.

Such nameless, faceless Hindus ensured that they avenged Dharma by sacrificing their very lives to try and stop the devastation of Islamic invasions. Their deeds are never found in history books, but Bhagwan Somnath remembers.