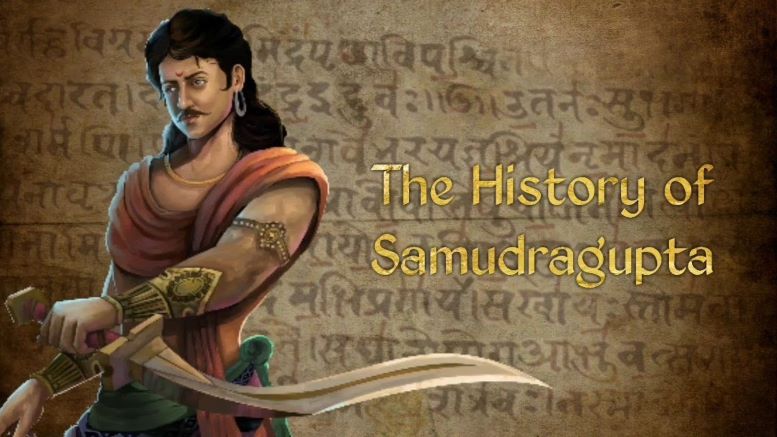 In the first part on our series on Gupta Dynasty’s illustrious emperor Maharajadhiraja Samudragupta, successor of Chandragupta I, we had introduced you to his personality and briefly presented the various works carried out by him to revive Sanatan traditions which had given way to Buddhism in the region under the patronage of Mauryan ruler Asoka. The chaos that followed the weakening of the Mauryan dynasty gave space to several foreign powers to raid the region and establish their kingdoms from time to time.

The rise of Samudragupta heralded an era of political integration in Bharat where after several centuries of fragmentation and foreign domination, the northern part of Bharat came to be integrated under the vigorous rule of a powerful monarch blessed with versatile talents. Samudragupta raised an effective military mechanism that is said to have included a navy and one which allowed him to establish his dominance over a significant part of the subcontinent. His military conquests proved that his sword was as effective as his pen and under his efficient rule the Gupta Empire began to grow by leaps and bounds in all the fields.

Different scholars have given different reasons for Samudragupta’s conquests, especially in the southern part of Bharat. It is important to mention here that though Samudragupta conquered much of Bharatvarsha, the Deccan (present Maharashtra and Goa) remained with the Vakatakas with whom Guptas entered into a matrimonial alliance during the reign of Samudragupta’s successor Chandragupta II.

SR Goyal in his book ‘A History of Imperial Guptas’ states “Samudragupta undertook military conquests to establish his over-lordship over the whole of Bharatvarsha inspired by the Hindu ideal of Chakravartitva or universal sovereignty”. This view seems to be corroborated by the Allahabad Pillar Inscription which contains a 33 lines panegyric (eulogy) composed by Samudragupta’s minister Harishena in the Champukavya form of literature that is a combination of prose and poetry. Harishena mentions how the numerous wounds on his body received during the hundreds of battles fought by him were marks of his glory and then goes on to say that the king inspired by the ideal of ‘Dharani-Bandha’ (being married to the earth and becoming a Chakravarti) embarked on his mission to conquer Bharatvarsha prior to performing Ashvamedha Yagna that would make him a ‘Chakravartin King’.

The astute ruler that he was Maharajadhiraja Samudragupta realised the administrative difficulties in controlling a vast kingdom. Therefore, he did not always bring all conquered territories under his direct control. While he established his suzerainty over some, others were exterminated and yet others were reduced to servitude and some were to pay him tribute and follow his orders. Tej Ram Sharma divides the conquests of Samudragupta, as described by Harishena, into five categories mentioned below:

1) Twelve rulers of Dakshinapatha (South India) were captured, liberated and reinstated in their kingdoms after they admitted Samudragupta’s suzerainty

3) Kings of forest kingdoms were reduced to servitude

4) Kings of frontier states and several tribes paid him tributes, obeyed his orders and performed obeisance to him

The twelve rulers were Mahendra of Kosala (districts of Raipur, Bilaspur of Madhya Pradesh and Sambhalpur in Odisha), Vyaghraraja of Mahakantara (Jeypore forest region in Odisha), Mantaraja of Kurala (Kolada near Russelkonda in Ganjam), Mahendragiri of Pistapur (modern Pithapuram in Andhra Pradesh’s Godavari district), Svamidatta of Kottura (Ganjam district’s Kothoor), Damana of Erandapalla (Erandapalli near Chiccole on the coast of Odisha), Visnugopa of Kanchi (modern Kanchipuram in Tamil Nadu), Nilaraja of Avamukta (on the banks of Godavari, as per Brahma Purana Avimukta kshetra may be located between Kanchi and Vengi), Hastivarman of Vengi (Vegi or Peddavegi, a village near Ellora Taluka between the Krishna and Godavari rivers), Ugrasena of Palakka (Palakkada in Nellore district), Kubera of Devarashtra (province of Devarashtra has been identified with Yellamanchili tract in Visakhapatnam district) and Dhananjaya of Kusthalapur (a tract around river Kusasthali near Dakshina-Kosala).

From the regions conquered by Samudragupta in his southern campaign it is amply clear that he confined his conquests to Eastern Deccan covering the forest region of Madhya Pradesh and then turning towards the eastern coast covering parts of modern Odisha, Andhra Pradesh and ultimately winding up at modern day Kanchipuram. This conquest not just helped him fill up his treasury but also secured important alliances which would help him in his future conquests.

Considering that Aryavarta was in the immediate vicinity of the land inherited by Samudragupta it doesn’t come as a surprise that he preferred establishing complete control over these conquered kingdoms. The eight rulers of Aryavarta have been identified as Rudradeva of Kausambi, Matila (not satisfactorily identified by scholars though some believe his kingdom to have been in modern day Bulandhsahr), Nagadatta (ruler of Naga kingdom whose descendents Dattas became viceroys of Guptas in Bengal), Chandravarman (ruler of Bankura district in Bengal), Ganapatinaga (ruler of Mathura), Nagasena (king of Padmavati identified with modern day Gwalior region), Achyutanandin (ruler of Ahichchatra, modern Ramnagar in Bareilly district and ancient Northern Panchala) and Balavarman (not identified satisfactorily).

Although only these eight rulers have been named in the Allahabad prashasti, it is generally held that the list isn’t exhaustive and it is an accepted fact that Samudragupta added several regions to his dynasty through a series of conquests. Suffice to mention here that the Aryavarta conquests were aimed at consolidating his core kingdom that came directly under his administration.

With these two conquests he established his undisputed power over a majority of important dynasties and regions taking him closer to his aim of becoming a ‘Chakravartin’.

We would cover the other conquests of Maharajadhiraja Samudragupta in the next part of this series.