Agnimitra and conflict with Vidarbha: an important event from the Sunga period 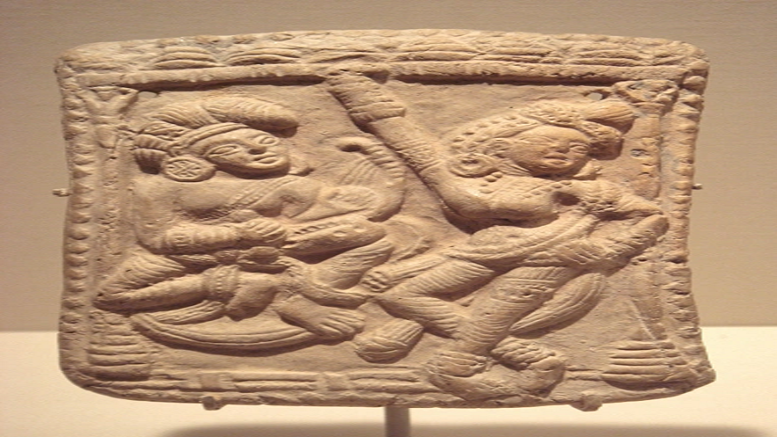 The Śuṅga dynasty is one of those ruling dynasties of ancient Bharat which has been mentioned by almost all sorts of Bharatiya literary sources. Apart from the archaeological and numismatic evidence of the Śuṅga Empire that existed from about 187 to 75 BCE, some vacuum in the Śuṅga history is filled by these literary sources.

There are many riveting events in the entire Śuṅga period, and one such fascinating event is the topic of this write up – the conflict between crown prince Agnimitra and the kingdom of Vidarbha or Berāra which has been detailed by the great poet Kālidāsa in his Mālavikāgnimitram.

The events leading up to the establishment of the Śuṅga power have been described in Harshacharita by Bāṇa and also in Purāṇas. The unpopular Maurya sovereign Bṛihadratha was assassinated by his general (Senāpati) Puśyamitra right in front of the Maurya imperial army in Pātaliputra. Maurya rule came to an end and a new ruler ascended the throne of Magadha. But the territory that came under the Śuṅgas was not what Aśoka had ruled in the Maurya Empire’s heydays.

The Śuṅgas ruled the central part of the erstwhile Maurya territory.1 The area under Maurya control had already diminished and by the time Puśyamitra came to the throne, northern Bharat had become autonomous.

Now some people might criticise the approach of using incidents from a drama and considering them as sober history. There can be no doubt that a dramatist may use a setting or characters from traditional history and embellish them with their words, especially in the ancient times when such themes were very common in every ancient civilization.

Therefore, some precaution is understandable but that should not come into our way of considering these literary works as worthy of research with regard to history of the period, especially when many of the characters and situations mentioned in the play have historical evidence.

“The name of the Śuṅga kings in the play correspond exactly to those found in the Purāṇas, including their genealogical order..”5

The other material from the Purāṇas also corresponds to the play as in the king of the empire, i.e. Puśyamitra/Puśpamitra has been called the general or senānī and not the king.6 In the play, crown prince Agnimitra has been shown as governing Vidiśa as his father’s Viceroy and we know from archaeological evidence that Vidiśa was actually part of Śuṅga Empire.

Another fact that comes in favour of Mālavikāgnimitram particularly is the absence of the curse in the play. To elaborate, we know that Kālidāsa did use curse as an important element in the story of many of his play or poems.

Whether it’s Vikramorvaśiya,  Abhijñānaśākuntalam, Meghadūta or Kumārasaṁbhava, the characters and sometimes even the basic story line are always inspired from the traditional tales of Hindu Dharma and beautifully embellished by him, interspersed with a lot of historical information. But interestingly, many of these stories originally did not have curse as part of their tales.7

So Kālidāsa uses this innovation of his to take the story forward when a character is cursed. And in these literary works therefore, the curse plays significant role. But interestingly, the curse is conspicuous by its absence in Mālavikāgnimitram. The treatment of this play is quite different to the other plays of Kālidāsa and it seems that “the scene of Mālavikāgnimitra is part of real, local history.” 8

Conflict of Agnimitra with Vidarbha

Eminent historian H. C. Raychaudhuri in his Political History of Ancient India, takes evidence from Mālavikāgnimitram and describes the events that led up to the conflict between Śuṅga prince Agnimitra and the kingdom of Vidarbha. He suggests that the ascendence of the Śuṅga power corresponds with the formation of kingdom of Vidarbha under Yajñasena.

“It appears that during the reign of Bṛihadratha Maurya, there were two parties or factions in the Magadha Empire, one headed by, the king’s sachiva or minister, the other headed by his senapati or general. The minister’s partisan Yajñasena was appointed governor of Vidarbha, while the general’s son Agnimitra got the Viceroyalty of Vidiśā. When the general organised his coup d’etat, killed the king and imprisoned the minister, Yajñasena apparently declared his independence and commenced hostilities against the usurping family.”

Raychaudhuri, Political History of Ancient India from the Accession of Parikshit to the Extinction of the Gupta Dynasty.

But both of them are arrested by an Antapāla, Warden of the Marches of Yajñasena and kept in custody. Another important role is played by Agnimitra’s brother-in-law, Vīrasena (he was brother of Agnimitra’s queen Dhāraṇī) who has been in the meantime appointed in charge of a fortress in the frontier on the banks of Narmadā by Agnimitra.9

Mālavikā somehow manages to escape but Mādhavasena is still imprisoned and when Agnimitra learns about these events, a conflict ensues. The details of the play and of the love story between the heroine Mālavikā and the hero Agnimitra is not our concern here, rather what happens between the Agnimitra and the kingdom of Vidarbha is the topic of our study.

Raychaudhuri especially points out the significance of two specific phrases used in the play. One is achirādhishṭhita and the other is   navasaṁropaṇaśithilastaru.

The Amātya of Agnimitra describes the kingdom of Vidarbha as achirādhishṭhita (established not long ago) and the king of Vidarbha is described as navasaṁropaṇaśithilastaru which means the king has been compared to a newly planted tree which is not firm. And because the king is in relation to the Maurya minister, he has been described as prakṛityamitra meaning a natural enemy.

After learning about Mādhavasena, Agnimitra promptly sends his messenger to the Vidarbha King to quickly set his friend Mādhavasena free but the reply he gets is unsatisfactory. Yajñasena has replied that there are certain ways in which “mutual transactions between equals are conducted” and thus asks for the freedom of the Maurya sachiva who has been imprisoned by Agnimitra.

The Śuṅga prince is unsurprisingly enraged. He doesn’t think that the king of Vidarbha is in a position to negotiate rather he should only obey Agnimitra’s orders.

Agnimitra swiftly gives orders to Vīrasena to march against Vidarbha. In the ensuing conflict, Vīrasena is victorious and he sets Mādhavasena free,10 who is welcomed in Vidiśā. The independent kingdom of Vidarbha ceases to exist and the kingdom is divided between the two cousins, Mādhavasena and Yajñasena in two halves under the paramount sovereignity of Puśyamitra. The river Varadā forms a boundary between these two halves.11

The fact that Dr. Raychaudhuri interpreted the phrases and words mentioned in the play like achirādhishṭhita, navasaṁropaṇaśithilastaru and prakṛityamitra with regard to the kingdom of Vidarbha to mean “established not long ago”, “a newly planted tree” and “natural enemy” respectively has already been mentioned. But this interpretation has been disputed by another historian Dasharatha Sharma.

He interpretes that “in Kālidāsa’s usage, a ‘new’ ruler need not be the one who has founded a new kingdom.”12 He disputes the view that the kingdom of Vidarbha under Yajñasena was a newly formed independent kingdom. Rather the fact that Mādhavasena enjoys royal status even before Yajñasena’s defeat by Agnimitra is pertinent.

He directs us to another detail in the play. Mādhavasena couldn’t have been made a royal by the Maurya sachiva who had no direct relation to him (The sachiva was brother-in-law of Yajñasena). As per Sharma, this interpretation betrays that the kingdom was not “newly founded”.

The negotiation by the king of Vidarbha was thus very clear – one śyāla (brother-in-law) was to be exchanged for another, albeit a would be śyāla.13

Sharma also interprets the phrase prakṛityamitra differently. Raychaudhuri has interpreted it to mean a natural enemy because Yajñasena was a relative of the Mauryasachiva and therefore a natural enemy of Agnimitra but Sharma interprets it in the context of Kautilya’s Arthaśāstra.

As per Arthaśāstra, “the adjoining ruler is regarded as prakṛtyamitra and the one next to him as mitra” and therefore, Yajñasena on account of being a neighbour to Agnimitra was a potential enemy.14 Sharma thus suggests to research into these details more before forming a concrete opinion on the play and using it to form history of the Śuṅga period.

Various interpretations of these phrases notwithstanding, Mālavikāgnimitram by the great Kālidāsa provides us with such a fascinating chunk of the history of Śuṅga period. And this is a great example that many of our literary works after careful corroboration from other sources, can be of great help to learn about many such dark spaces in ancient Bharatiya history.

(The story was first published on author’s blog on January 23, 2021 and has been reproduced here with permission, with some minor edits to conform to HinduPost style-guide.)