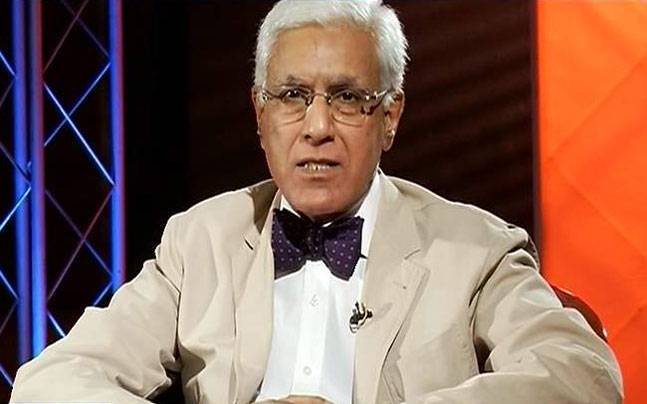 Karan Thapar is considered one of India’s foremost media ‘intellectuals’. He is currently associated with the noxious propaganda site The Wire, and is a leading member of the Lutyens’ cabal. The utter deracination and disconnect from the Dharmic roots of Bharat of this lot (also known as HINOs, i.e. Hindus in Name Only) was brought into stark relief when Thapar participated in a Pakistani think tank’s program via video conferencing on April 1.

In a discussion titled ‘Navigating disinformation and discourse in the information age’, Thapar was defaming PM Modi and BJP when he uttered the following – “Bajrang Bali is another name for God Humayun”. This Freudian slip is instructive on many levels. First, it reflects the Mughal-love that is a staple for Thapar’s breed of Nehruvians. Second, it shows the utter lack of knowledge and barely-concealed contempt towards Hindu Dharma that this breed suffers from.

The session was being moderated by Mosharraf Zaidi, a known Islamic supremacist and Bharat-baiter who, in a true sign of taqiya expertise, rants relentlessly on twitter against ‘Hindu/white supremacists’, and hilariously fashions himself as a ‘quasi-liberal, civilized’ voice. Islamists like Zaidi wouldn’t have a leg to stand on, given the Islamofascist-terrorist nature of the Pakistani state and its brutal persecution of Hindu and other minorities, if not for Western and Indian left-liberal mollycoddling. In a Lutyens cabal that is full of Pakophiles, Thapar has an especially dubious reputation of being close to Pakistani deep state elements.

His entire 7-minute address was extremely objectionable and disparaging towards RSS, BJP and Hindus in general. It betrays the same callous disregard for the Hindu point of view that we have now grown accustomed to from this class of charlatans posing as ‘defenders of democracy and free speech’.

Here are some of the key falsehoods peddled by Thapar –

1.) He repeated Marx’s words “Religion is the soul of the soulless world” to make a point that “(Modi) government has appealed to this country in deliberate conscious religious terms knowing that 80% of the country is Hindu…our part of the world is very religious, it tends to be the case in country’s where economic development is limited”.

Likes of Thapar drop in a word or two about greatness of Hindu culture and its tolerance when it suits them (when they want to fool Hindus, and ingratiate themselves), but this is their reality. They think of Hindu religion as a useless relic that is holding the country back, and something which poor people turn to in desperation. Forget understanding the bliss, the mentally and spiritually elevated state that bhakti and sadhana can lead to, what these arrogant HINOs deliberately hide is that the entire world is ‘very religious’. 83 out of 199 countries in the world have an official state or preferred religion. Modernized, ‘first-world’ countries like UK, Denmark, Iceland, Norway, Monaco, Greece have Christianity as the official religion, while Italy, Finland, Poland, Russia, Romania, Spain have Christianity as a preferred religion. USA may officially have no religion, but the role it plays in promoting aggressive evangelical Christianity as a geopolitical instrument is not hidden from anyone. All US Presidents have been Christian (mostly Protestants; Biden is only the second Catholic President after Kennedy), and church visits are a staple part of the US Presidential campaign.

Half of states with official or preferred religions are in Europe or Middle East-North Africa! Moreover, what is practised in Bharat is Dharma, something very different from organized, one-book monotheism. It encompasses profound spiritual insight, philosophy, arts and culture – something that likes of Thapar, steeped in Euro-centric intellectual frameworks, can barely fathom so sneer down upon.

2.) “Partition trauma can be easily scratched, you have chosen to demonize another religion through dog-whistles.”

Partition was a monumental event in the history of the sub-continent. Contrary to what Thapar is saying, we have glossed over its lessons and pretended like it never happened. It is beyond bizarre. It’s like telling Jews to ‘not scratch the holocaust trauma’!

The same Islamist forces that demanded partition are around today as well – thank to leaders like Nehru, that Thapar so admires – and guess what, they are making similar noises again. It is not the Hindu or Dharmik who has demonized anyone. We co-exist harmoniously despite having a plethora of diverse sampradays (sect/community), cultures etc. It is the Abrahamic fundamentalists and their Hindu-hating HINO supporters who have demonised Hindus as ‘Satanic idol worshippers’, polytheists, superstitious etc. ‘Go to Pakistan’ is a very normal reaction of a people who are sick and tired of the fact that despite having given up a large chunk of their ancestral homeland to Islamists, we are still facing violence, extremist demands and extreme intolerance.

3.) “This country gave itself a Constitution where we opted not to compete in religious terms ..to try and forge a country where ethnicity, religion, language, culinary difference didn’t matter…what mattered instead was the common consciousness of being Indian.”

The Constitution through Article 25 to 30 gave several benefits to so-called ‘minority’ religions that are denied to the majority Hindus, such as right to manage religious institutions, freely impart religious education in schools and manage them. Incredibly, it allowed global, expansionist religions the right to proselytize. The original intent of Constitution framers notwithstanding, these laws and the way our judiciary has interpreted them have turned out to be a colossal blunder. Hindus and other Dharmiks (including vanvasi/tribal belief systems) are under siege from the conversion mafia in every state today. Rather than promote the consciousness of ‘being Indian’ i.e. Bharatiyata, the Lutyens elites and ‘secular’ leaders today are exacerbating every possible fault-line – linguistic, regional, religious, cultural – to somehow recapture the power which has slipped out of their hand

4.) “Once this devil has been let out of the bottle, it is impossible to put it back in the bottle. This is something liberal Indians, and I am not saying Westernized Indians (referring to himself), lot of deeply Hindu people also feel that this deliberate exploitation, this deliberate use of their religion for political purposes is wrong and its not Hindu…

By the way, Hinduism is one faith where multiple gods are accepted as Hindu gods. You can be perfectly agnostic and atheistic and still totally religiously Hindu . It’s not part of our faith to demonize any other, we do not have unlike the Muslim, Christian, Jewish faith a received book, we don’t have a received hierarchy of priests, we don’t have an order that you genuflect to like the pope or the Vatican, or Mecca, Medina. The Hindu faith is very different…what has been done for politics is to convert it into something it is not. And so in the process you are not just breaching your Constitution but also horribly misunderstanding the character of Hinduism. So not just a great insult to the Constitution, but perhaps an even bigger insult to greatness of Hindu faith. Its being destroyed in the hands of politicians who don’t understand that it is the saddest part as well. “

Hindus awakening to the fraud of secularism (aka minorityism) is equated to the ‘devil coming out’! Now, what is the purpose of politics? One definition says it is the “set of activities that are associated with making decisions in groups, or other forms of power relations among individuals, such as the distribution of resources or status.”

For the likes of Thapar, it is perfectly fine for Muslims, Christians, Sikhs to group themselves and for their religious institutions to openly dabble in politics; it is ok for people to group themselves along regional and linguistic lines; urban-rural grouping is also fine; Hindu jaati-groupings (caste/clan/community) like Yadavs, Jats, Jatavs, Vokkaligas, Thakurs etc are positively encouraged – and all these groups are told that it is perfectly natural for them to compete with each other for resources and status. Indeed, the never-ending squabbling for quotas, funds, and one-upmanship is cherished and celebrated as the ‘Idea of India’, as a sign of a ‘healthy democracy’.

But one grouping is pure evil – that of Hindus! If Hindus shed their jaati, regional and linguistic sub-identity and come together as just Hindus, all hell breaks loose. Suddenly, the Constitution is under threat and the greatness of Hinduism is being destroyed!

Does Karan Thapar listen to himself? If he does, its hard to imagine he misses the obvious chicanery in his words. Thapar says that unlike other religions, Hindus worship multiple deities, don’t demonize others, don’t follow just one book, don’t genuflect to just one supreme authority or set of preists – and he is absolutely right. But in saying this, isn’t it implicitly implyied that other religions don’t share these traits, i.e. they are exclusivist and intolerant?

So when Hindus live in the same society alongside Muslims and Christians, who are told day in and out by their fundamentalist clerics that they alone follow the One True God, and that it is their duty to spread their religion and ‘save the non-believer’, how can Hindus remain immune to this direct threat to their existence? Does the Constitution demand that Hindus shed their religious identity altogether, and allow Abrahamics to do as they please?

Dharma encompasses various fields of human endeavor and politics aka rajneeti is one of them. Creating a just and harmonious society where different communities and spiritual paths live in mutual-respect is a core part of Dharma. Hindus have been taken for a ride for 70 years in the name of secularism and Constitutionalism. No more.

Thapar is the son of former Army Chief Gen. Pran Nath Thapar, during whose term Bharat lost to China in the 1962 war, forcing him to resign in disgrace on 19 November that year. He is also related to the Nehru family – Nehru’s niece, the Award-Wapsi writer Nayantara Sahgal, was married to Karan Thapar’s maternal uncle. Controversial ‘historian’ Romila Thapar is Karan Thapar’s cousin.

This veteran ‘journalist’ is an alumnus of Doon School, Cambridge and Oxford, and was a close childhood friend of Sanjay Gandhi. His family was part of the Punjabi elite that came into new wealth as commission agents for the British colonists. His paternal grandfather donated money to undivided Punjab’s British governor O’Dwyer, the man who backed the actions of Jallianwala Bagh mass murderer Dyer – the elder Thapar was duly awarded with a title by the British.

The Thapar clan also has links to the Bollywood Kapoors and Khushwant Singh’s family. Khushwant Singh’s father ‘Sir’ Sobha Singh also amassed his riches by being loyal to the British and was the one who gave dubious testimony that led to conviction of Bhagat Singh and Batukeshwar Dutt in 1929.

Before 2014, Karan Thapar was considered the premier interviewer of India – youth were in awe of his clipped accent and command of the English language. His friends in high places ensured him access to all doors and drawing rooms. There was never any serious scrutiny of the actual thoughts of this Lutyens’ elite. But all that has changed after 2014. Hence the resentment of this discredited cabal has made them so desperate as to bad-mouth their own nation at a platform provided by a failed terrorist state like Pakistan.