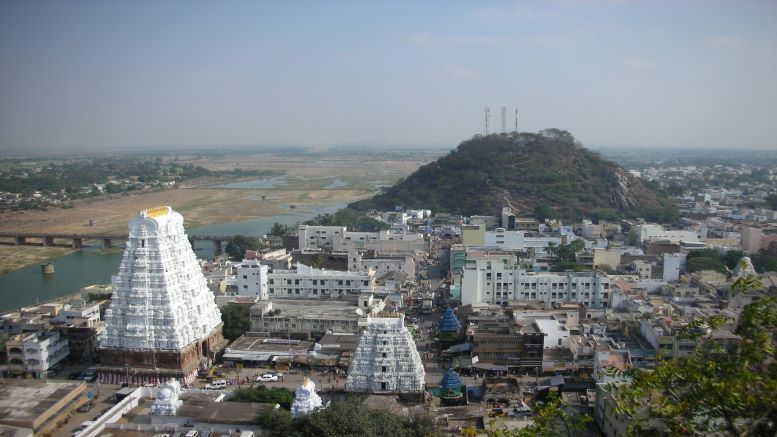 Srikalahasti Temple is located in the town of Srikalahasti, in the state of Andhra Pradesh. This temple situated 36 km away from Tirupati is famous for its Vayu linga, one of the Panchabhoota Sthalams, representing wind and is also one of the Jyotirlingas. The temple is also regarded as Rahu-Ketu kshetra and Dakshina Kailasam.

The town of Srikalahasti finds mention in three Puranas, namely the Skanda Purana, the Shiva Purana and the Linga Purana. According to Skanda Purana, Arjuna came to this place to worship Kalahasteeswara (Bhagwan Shiva) and stayed at Rishi Bharadwaja ashram on the peak of a hill where he learned the intricacies in Archery and martial arts.

There are several legends connected to the glory of the temple. Parvati was once cursed by Shiva and assumes the human form. To get rid of the above curse Parvati did a long penance at this place. Pleased with her deep devotion Shiva again recreated her body –better than her previous heavenly body and initiated various mantras including the Panchakshari. Consequent to this, Parvati came to be known as Gnana Prasunamba or Gnana Prasunambika Devi.

At this place, Lord Shiva is believed to have given liberation to an elephant, serpent, and spider who were great devotees of Lord Shiva’s lingam located at this place. In Kritayuga, which is considered to be the first of the four Yugas of the Hindu religion, the spider gets salvation, while the snake and the elephant who were the devotees of Lord Shiva got salvation in the Trata Yuga. It is believed that the devotional expression of the elephant was disturbing the devotional display of the serpent and vice-versa and so, the two developed extreme animosity against one other. It finally ended with Shiva liberating the two of them. The name of this temple town Sri Kalahasti derives from Sri- Spider, Kala- Serpent, and Hasti- Elephant.

Bhakta Markandeya received blessings from Bhagwan Shiva in this temple.

The legend of Kannappa, who was a hunter and turned into an ardent devotee of Shiva, is associated with this temple. Adi Shankara, in his Sivananda Lahari, mentions the devotion of Kannappa as under:

This sloka refers to the devotion shown by Kannappa a hunter to Bhagwan Shiva. In the forest, he used to remove his sandals and place them on the top of the idol, bring water in his mouth to bathe the idol, and offer to the lord the meat pieces which he found were tasty. Adi Shankara in the above shloka in his Sivanandalari says, the sandals that are used to walk on the earth become the crown of Pasupathi (shiva), the gargled mouthful of water brought by Kannappa become the holy water to take bath for HIM who is the destroyer of three cities (Bhagwan Shiva, also known by the name Tripurantaka, destroys the three cities of Demons that were made of iron, silver, and gold and were located on the earth, sky, and heaven respectively and known for prosperity, power, and dominance). The pieces of meat that were tasted by Kannappa become the holy offering to Bhagwan. The hunter who wanders in the forest becomes the king of devotees of Bhagwan Shiva and that is the power of devotion.

The inner temple was constructed around the 5th century and the outer temple was constructed in the 11th century by the Rajendra Chola I, later expanded by Chola kings and the Vijayanagara kings. The temple received contributions from Chola Dynasty and Vijayanagar Empire. The hundred pillared halls in this temple with intricate carvings were commissioned during the regime of Krishnadeva Raya in 1516 AD. In 1529 AD Sri Achyuta Devaraya, Brother of Sri Krishna Devaraya had his coronation ceremony in the 16 pillar hall in this temple.

The presiding image of Shiva in the form of Linga is made of white stone in a shape resembling the trunk of an elephant. The temple faces south, while the sanctum faces west. The temple is located on the foothills of a hill, while there is also a belief that the temple was carved out of a monolithic hill. There is a rock-cut shrine of Vinayaka, 9 ft (2.7 m) below the ground level. Vallaba Ganapathi, Mahalakshmi-Ganpathi, and Sahasra Lingeswara are some of the rare idols found in the temple. There is a large shrine of Jnanaprasanammba, the consort of Kalahateeswara. There are smaller shrines in the temple for Kasi Viswanatha, Annapurna, Suryanarayana, Sadyoganapathi, and Subramanya. There are two large halls namely Sadyogi Mandapa and Jalkoti Mandapa.

This temple is considered “Kashi of the South”. This is the only temple in Bharat that remains open during Solar and lunar eclipses, while, all other temples are closed. This temple is famous for Rahu-Kethu pooja. It is believed that performing this pooja will ward the people from the evil effects of Rahu and Kethu. As per Hindu legend, Kalahasteeswara was worshipped at this place by Brahma during all four Yugas.

The first poetic reference to Srikalahasti can be seen in the 3rd-century works of Nakkeerar who was a poet during the reign of the Sangams. It was Nakkeerar, who gave the town the name of Dakshini Kailasam. Kalahasti temple finds mention in Tirumurai which is a twelve-volume compilation of songs or poems in praise of Shiva in the Tamil language from the 6th to the 11th century CE by various poets in Tamil Nadu.

As the temple is revered in Tevaram, it is classified as Paadal Petra Sthalam, one of the 275 temples that find mention in the Saiva canon. (Tevaram contains the first seven volumes of the twelve-volume collection Tirumurai, as well as a hagiographic account of early Saiva saints written in devotional poetry. The Thevaram volumes contain the works of the three most prominent Saiva Tamil poets of the 7th and 8th centuries: Sambandar, Appar, and Sundarar.) Dhoorjati was a Telugu poet who settled in Srikalahasti and wrote a hundred stanzas by the name –‘Kalahasteeswara Satakam’ in praise of Sri Kalahasteesewara which is one of the most revered works in Telugu literature.

The murtis– Pathala Vinayaka, Devi Gnanambika, Bhagwan Sri Kalahasteeswara, and Dakshinamurthy face different directions in the temple premises. While the north-facing Pathala Vinayaka is a symbol of Dharma, Devi Gnanambika facing east is considered as a symbol of Jnana or knowledge that bestows Artha or wealth, the south-facing Dakshinamurthy is considered as the God who fulfills all desires (Kama) and the Bhagwan Kalahasteeswara facing the west offers Moksha to the devotees. Bhakta Kannappa’s idol along with crystal (spatika) shivlinga and Panchaloha murtis of 63 Nayanars (i.e., saints who lived during 3 rd century to 8th century CE and devotees of Bhagwan Shiva which also includes Bhakta Kannappa) are installed in the temple premises.

Swarnamuki river flows near to the temple. Kannappa hill and Bramha temple are located near the southern gopuram of the main temple. The well inside the temple is known as Saraswathi Theertham.

The 15-century iconic Rajagopuram of Srikalahasti Temple, built by Sri Krishnadevaraya, collapsed on 26 May 2010. As per Archaeology Department, the temple tower stood on a foundation that had a depth of only one-and-a-half feet and had a thin crack 25 years before it collapsed which expanded as years passed by. The Rajagopuram is reconstructed again in its original form at the same location with a budget of 45 crores and is consecrated on 18, January 2017.

Sri Kalahasti is well connected by road, train, and the Tirupati International Airport (Renigunta) is located at 27 KMs from this Shiva temple.