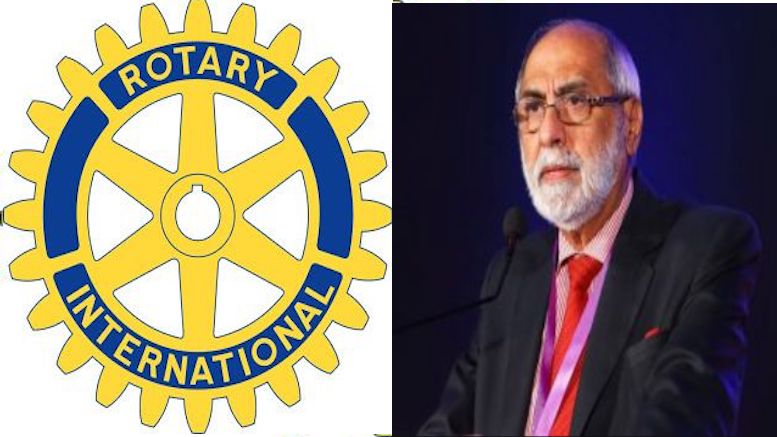 Gul Kripalani is a name not many common Bharatiyas may be aware of. However, he is well known in Mumbai’s business circles and hold important positions in trade associations and NGOs such as the Rotary Club that often attracts an urban upper middle class crowd. Mission Kali has made a shocking revelation that Gul Kriplani is a crypto-Christian, i.e. a Christian carrying a Hindu name who surreptitiously indulges in evangelical activities. His objective is to make Bharat a Christian country.

KnowUrCryptos: Gul Kripalani claims that he wants to make 🇮🇳 a Xtian Nation! He holds several leadership potions in Trade Assocs&NGOs (Rotary). Actively works in spreading the Xtian message in the most powerful circles Do these orgs know his plan? @icbc_org @FIICC_South @RCB1929 pic.twitter.com/UM5eYuhavf

While he himself makes the confession in the above video while speaking at a gathering, several evangelical sites have also carried his ‘testimony’. Kriplani is a successful businessman who is in the seafood business. He is the managing director of seafood company Pijikay Group and has also held important positions in business associations such as Chairman of the CSR Committee of Indian Merchants Chamber, Indo-Canadian Chamber of Business, The Seafood Exporter’s Association of India, The Chamber of Indo-Israeli Trade and Culture, International Trade Community of Indian Merchants and Director of Rotary Club of Mumbai at various points in time.

As per his testimony, Gul who comes from a Sindhi Hindu background was introduced to Jesus by his devout Protestant Christian wife Sheila who made him realise that “not those religious gurus whose feet he used to wash thinking it would bring him success in his business, but Jesus was the greatest of Gurus”.

Influenced by his wife, Gul not only accepted ‘Jesus as his Lord and Saviour’ but is also ‘spreading the good news in the marketplace’ in his own words. In short, he is simply admitting that he has been indulging in evangelical activities for which he has leveraged the positions he held in various trade organisations. In one of the videos he says that ‘his purpose is to have 90% believers in this country and 10% yet to know and today it is the other way round. Let us work to see that the Lord becomes the Lord of India’.

Kripalani has strategically positioned himself in the important post of  Chairman of CSR committee in Indian Merchant’s Chamber. On April 1, 2014, the outgoing UPA government made it mandatory for companies of a certain turnover and profitability to spend two percent of their average net profit for the past three years on CSR or Corporate Social Responsibility. Thus CSR became another mechanism through which Congress ensured funding even from private sector for its left-liberal-secular NGO ecosystem.

In the video above, Kripalani explains how by involving himself in the CSR committee, he has a say in how big corporates like Tata, Ambani etc utilise their CSR funds. He talks about how Government of Maharashtra wants CSR funding for the education sector, particularly in the rural areas, and how he helps corporates partner with it. It is well known that education is one of the core areas targeted by Christian evangelists as per the 4-14 window theory – how many Christian education NGOs Kripalani aided by supplying them CSR/govt funds using his influence is anyone’s guess.

He then goes on to say how he has been raising funds – one event he started 16 years ago raised Rs. 7 lakhs in the beginning to over Rs. 2 crores now. This annual event called the ‘Melting Pot – Consular Corps Charity Carnival of Mumbai’ brings together various foreign consulates in Mumbai for a food and cultural festival. Funds raised from the event are disbursed to Christian NGOs like ‘Habitat for Humanity’ to construct homes for the poor.

This is how the US-based NGO describes itself – “Habitat for Humanity was founded by Millard and Linda Fuller who developed the concept of partnership housing with farmer and biblical scholar Clarence Jordan. While we have Christian roots, Habitat for Humanity India works with people of all backgrounds, races and religions across India to build houses in partnership with families in need.”

CORO – an organisation which claims to have been shaped and managed predominantly by Scheduled Caste and Muslim women and men to ‘eliminate social discrimination and deepen democracy’.

Is the GOI and Ministry of External Affairs aware that foreign consulates are doing such fund-raising for direct/indirect Christian evangelical work?

Gul Kripalani uses his position of influence in a seemingly secular Western organisation like Rotary Club to invite Christian preachers and missionaries to address Indian audiences. In an interview with christianmessenger.in, he says, “My Rotary Club is the only one in the country to have invited Gladys Staines, Ravi Zacharias and Ramesh Richards. However, I don’t talk about religion at Rotary Club meetings. Whenever I talk about Jesus, I find a context in which to do it. I believe every Christian businessman must be able to talk about Jesus in the marketplace.”

His position has given him access to many influential people from various fields including business, fashion, politics and cinema. And he has abused the trust placed in him by thousands of Hindus to indirectly deride their religion, culture and society. Retaining one’s Hindu name, in other words crypto-Christianity, has become the latest tool of evangelicals and neo-converts not just to retain caste benefits but also deceive public at large.