Misuse of Hindu SC benefits by Christian converts in Andhra For many decades now undivided Andhra Pradesh (AP) has been the hub of Christian evangelism and has seen rampant conversions particularly from SCs (Schedule Castes), STs (Schedule Tribes) and OBCs (Other Backward Castes).

However, despite the massive conversions, censuses have shown decline in numbers of Christians while missionary organisations have claimed the contrary. Additionally, number of churches is on the rise as well and often disproportionate to the ‘official’ number of Christians in the village/district which raises the question of ‘Hindu (particularly SC or OBC) on paper and Christian in practise’, in other words Crypto-Christians. These Crypto-Christians often corner benefits meant for upliftment of backward Hindus and with official complicity this encourages religious conversions.

Now, an NGO Legal Rights Protection Forum (LRPF, twitter handle @lawinforce) has brought this to the attention of SC and BC National Commissions by sending an official complaint on 7th January 2020 in which they have sought remedial actions and requested both the bodies to send fact-finding missions to AP to verify their claims.

In the absence of mandatory provision to register change of religion, most of the conversions from Hinduism to Christianity are neither noticed nor recorded in any official records. Majority of the said conversions are out of SC (Scheduled Caste) Hindu population in the state.

The enormity of the problem can be gauged by the fact that the words ‘SC’ and ‘Christian’ are being used interchangeably and being exploited. As an example, we are citing the case of reply dated 06.09.2019, 26.09.2019 and 05.11.2019 respectively received for our RTI query on selection of beneficiaries for the previous government’s scheme ‘Chandranna Christmas Kanuka’ for Christians. The government officials replied that they treat the entire SC population as Christians and as such they extended the scheme to all SC people whereas it should be given only to Christians. (Annexures-1A, 1B & 1C – Attached)”

LRPF has included several data supporting their claims. One of these is a research paper by Centre of Policy Studies, New Delhi titled “What happened to the Christians of Andhra Pradesh?” (Annexure 2) One of the most important data to take note of is the Christian and SC populations in various districts of AP between 1971 and 2011 given below (as highlighted by LRPF in their letter).

The most revealing data is that the sharp decline in number of Christians corresponds to the sharp rise in those claiming themselves as Scheduled Caste. 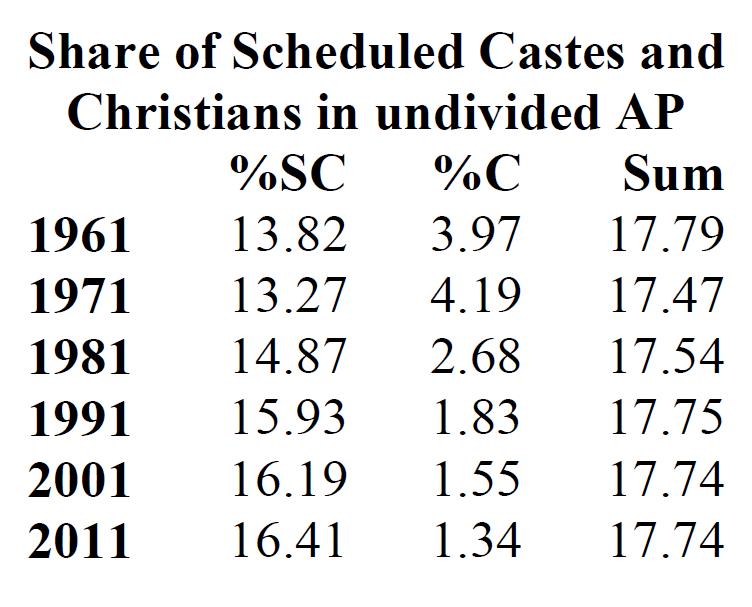 The data for Guntur district is even more shocking. In 1961, 5.24% of the population was from Scheduled Castes and 13.40% was from Christians. By 2011, the figure for SCs has risen to 19.59% while the figure for Christians came down to 1.84%. Is it not safe to assume that those practising Christianity have obtained Hindu-SC caste certificates to garner each and every opportunity and facility given for benefit of SCs – like reservations in political constituencies, nominated posts, jobs, educational opportunities, scholarships, hostels, housing etc.?

As a further proof of large scale conversions to Christianity but concealment of their real religion, as a case study we provide the statistics for one mandal namely Reddygudem in Krishna District, Andhra Pradesh. In a reply to our RTI Application on number of Churches in the Krishna District, the Mandal Tahsildar of above said mandal furnished the following data:

As a further example in the above said Mandal of Reddygudem, in the village of Maddhulaparva the data is as follows :

This was revealed in a reply given to us on 21.06.2018 by the office of the Mandal Tahsildar of Reddygudem. Why should there be 11 Churches unless a large number of Christian converts out of Hindu SC/OBC exist in the village? (Attached as Annexure-3).

As a further proof of large scale of conversions into Christianity we recall the recent statement made by Mr. K. Rajendra Prasad, Secretary for the AP United Pastors Association in a meeting held after the 2019 Assembly Elections in Kaamayyapalem Village, Jeelugumilli (M), West Godavari (District), Andhra Pradesh claiming a membership of 5 Lakhs Pastors and total 2 Crores of Christian population in Andhra Pradesh where as the 2011 Census shows the total population of Christians is only 6.82 Lakhs in Undivided Andhra Pradesh. (Attached News Clip as Annexure-4)

In various debates in TV Channels, several Christian leaders have been claiming that up to 30% of the state population is now Christian which leads to the inescapable conclusion that 28.5% of the population has wrongly declared its religion during census, and a bulk of these wrongful declarations have been made by SC/OBC converts out of Hinduism into Christianity. This is a serious violation of the laws and disrespect towards the Constitution of India and the entire nation. (Video Clip of the TV Debate attached as Annexure-5)

In this manner, if the data and ground realities in the state of Andhra Pradesh in respect of ineligible converts into Christianity carrying Hindu caste certificates are studied in-depth, a massive scam of gigantic proportions will be revealed. In terms of sheer numbers, amount involved, number of years for which this gross injustice has been perpetrated on genuine and deserving SCs, this could turn-out to be biggest scam of post independent India.

We suspect that going by the large presence of Churches, large scale receipts of FCRA funds by evangelical organizations, government officials treating all SCs as Christians, it is clear that large scale conversions from SCs into Christianity have taken place in the state of Andhra Pradesh.

But as per 2011 Census the number of Christians in the entire state of Andhra Pradesh is 6,82,660. From the year 1951 to 2011 Census the percentage of Christians has fallen from 5.37 % to 1.38 %. Whereas there is a vertical explosion in the number of Churches/Evangelical activity across the state. This shows that the constitutionally guaranteed reservations/safeguards meant for benefit of SCs are being misused by Christian converts.

The large scale conversions are leading to social strife, law and order issues, families being torn apart. Converts are refusing to cremate their departed elders, refusing to attend family ceremonies. The aggressively proselytising evangelists are sowing the seeds of secessionist, separatist ideas in the minds of converts. They are shifting the loyalties of the converts from nation to extra-territorial, extra-constitutional evangelical/ Christian religious heads located abroad. This does not bode well for the unity and integrity of the country.”

We can see the contrast, as pointed out in their letter, between rising SC figures and declining Christian numbers which is a matter of concern because it clearly indicates that those who have left the Hindu fold continue to draw benefits specifically reserved for Hindu scheduled and backward classes. This is not just hiding one’s Christian identity but defrauding the constitution itself, and a direct threat to social harmony and integrity of the nation.

It, therefore, needs a thorough investigation so that schemes meant for the upliftment of needy Hindus reach them and they do not suffer due to such fraud. Also, quick action needs to be taken to stop such anti-constitutional acts both in the interest of the majority community and the nation at large. It must be remembered that official complicity and giving benefits to Christians misusing Hindu caste names would only serve as inducements for more conversions among the poor and backward Hindus who are being bombarded relentlessly by the missionary mafia with all sorts of anti-Hindu propaganda and foreign funds.