Puducherry: Muslim man abuses Hindu Gods and sculptures inside a temple and live telecasts it on FB 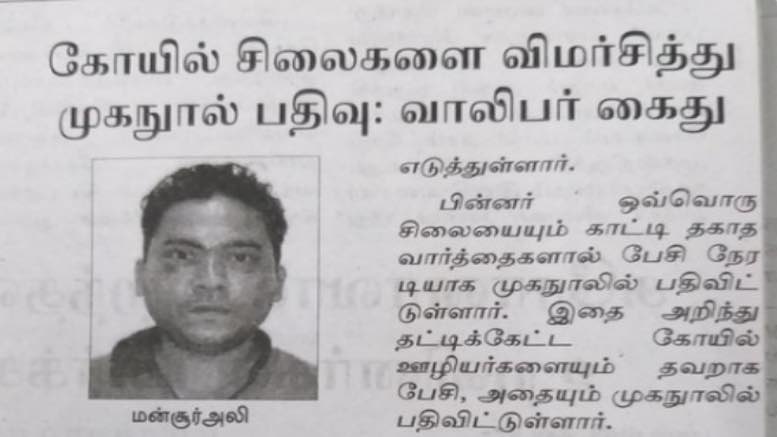 In an outrageous incident, a Muslim man entered a temple in the union territory of Karaikal in Puducherry and made obscene comments about the sculptures on a Facebook live feed. Manzoor Ali, son of Habeeb Ahmed, a resident of Ambakarathur in Karaikal, has been arrested in this regard.

Parvatheeswarar temple is located in Perumal Kovil Street which belongs to Badrakali Amman temple. Yesterday Manzoor Ali trespassed this temple and started taking pictures of the sculptures in the temple. He started abusing the sculptures of gods and goddesses in obscene language and went ahead to live feed it on his Facebook page. When temple workers and archakas questioned him and tried to stop him, he is said to have abused them as well.

Mansoor Ali of Ambakarathur, held for entering into a Shiva Temple & going live on Facebook, abusing Hindu Gods and the sculptures in the Temple. pic.twitter.com/mZjUsOa3d9

Temple authorities filed a complaint with the local police seeking to arrest Manzoor Ali. Ali has been arrested and remanded and his mobile phone which he used for the act has been seized.

What emboldened a so-called minority to enter a Hindu temple and abuse Hindus gods?

The likes of Thirumavalavan, chief of Viduthalai Chiruthaigal Katchi (VCK) party, which poses itself as a champion of Dalits, have been abusing Hindu Dharma in the name of ‘reforming’ its old practices. He is a known Hindu hater, calling for the destruction of major temples in TN alleging that they were Buddhist Vihars once. He also made a crass comment that Hindu temples are places with ugly, obscene figurines.

Recently, he started a so-called campaign for women empowerment, where he called on Hindu women to burn Manu Smriti. He spoke in an event organised by Periyarist organisations falsely claiming that women are described as prostitutes in Manu Smriti. The truth is that the verses talked about some women who may turn to the wrong path – Thirumavalavan took it out of context and alleged that that’s how Manu Smriti describes all women. He took care to mention ‘Brahmin women’ to abuse them specifically out of hate for the community. While this generated widespread discontent among Hindus and women in particular, it seems to have inspired those who follow other religions to abuse Hindu Dharma and its gods freely.

Thirumavalavan’s followers and supporters posted a cartoon of him pulling the Shikha (tuft of hair) of a Brahmin. Numerous such anti-Hindu, anti-Brahmin contents were shared in the name of supporting Thirumavalavan when a case was filed on him for degrading Hindu women. That it went unopposed and unanswered seems to have propelled such people to brazenly abuse even Gods, murtis and temple sculptures.