No, Onam is not a secular festival; time to end secular appropriation of Hindu festivals The secular cabal is at it again – appropriating and ‘secularising’ Hindu festivals! This time it the popular Kerala festival ‘Onam’ which is celebrated as Bhagwan Vaman Jayanti by Hindus across different regions of Bharat.

From the Bhagvat Purana to Sangam literature and historical accounts of foreign travelers to Bharat; there is ample evidence testifying Onam as a Hindu festival. The cabal, however, is hell-bent on overlooking these just to propagate its agenda and further alienate Hindus from their roots.

Onam celebrates the annual visit of Raja Mahabali to check on his subjects. Mahabali was an Asura king, much loved by his subjects.

After the amrit-manthan (churning of the ocean to obtain the nectar of immortality), the Asuras took away the nectar by trickery. Following this, Bhagwan Sri Hari Vishnu assumed the form of Mohini to obtain it back from the Asuras using their own trickery method.

As Bhagwan Vishnu distributed the nectar only among Devas a war broke out between the Devas and Asuras led by Raja Mahabali. It is important to point out here that Devas and Asuras are step-brothers as they are all sons of Rishi Kashyap from Aditi and Diti respectively.

It is important to point out here that unlike what the secular cabal would like us to believe, Mahabali is a Brahmin by virtue of being a descendent of Rishi Kashyap on his father’s side.

Mahabali became unconscious in the war and was carried away to Pataal Lok by his men where the Guru of the Asuras Rishi Shukracharya revived him using the Mrita-Sanjeevani mantra.

Mahabali then asks his Guru the means to attain the “grace of Bhagwan” like the Devas have been able to do. Guru Shukracharya advises him to do the Vishwajeet Yagna at the successful completion of which he obtains divine chariot, horses, and war equipment making him invincible. Having become invincible, he displaces the Devas along with their King Indra from Swarga (heaven).

Seeing her children (Devas) suffering, having been banished, Aditi begins praying to Bhagwan Sri Hari Vishnu on the advice of her husband Rishi Kashyap. Bhagwan Vishnu agreed to win back the lost kingdom for Aditi’s children by taking birth as her son.

However, Bhagwan told her that he would not kill Mahabali as He had promised Bhakt Prahlad (Mahabali’s grandfather) not to kill anyone belonging to his lineage. As promised, Bhagwan was born to Rishi Kashyap and Aditi in the month of Bhadrapad in the Abhijeet nakshatra.

The child was named Upendran who was known as Vamana being dwarf-like in appearance. Mahabali was performing the Ashwamedha Yagna when Bhagwan reached the Yagya-shala (the place where the Yagna was being performed). 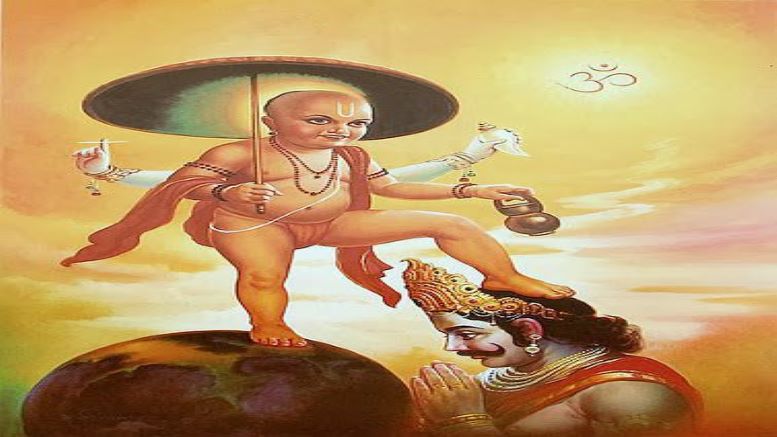 Mahabali asked what donation he should offer Bhagwan to which the latter replied that all He wanted a place for meditation (dhyana) for which he required land measuring three of His footsteps.

As soon as Bali agreed to give what Bhagwan who had come as a Brahmachari (young unmarried boy), He assumed the form of Trivikrama (conqueror of all the three worlds). In this form, He encompassed the entire earth with one step and the sky/heavens with the second. Since there was no place left for the third, Mahabali offered his head and Bhagwan sent him to the Sutala (part of Pataal Lok) with the third step.

Bali was not just granted the boon to visit his subjects once every year but Bhagwan Himself is said to have become Bali’s gatekeeper in the Sutala region.

There are several historical records including foreigner’s accounts and copper-plates of Hindu kings which attest the fact that Onam is a Hindu festival celebrating Bhagwan Vishnu.

The earliest reference in this regard is the copper-plate of 9th Century Chera King Sthanu Ravi detailing the annadana (feeding the masses) done to celebrate Onam.

“In the 17th Regnal year of Sri Ko Sthanu Ravi…

Scottish civil servant mentions in his “Malabar Manual” that it is the day when Bhagwan Vishnu is said to have come to earth to make His people happy. 17th Century East India Company administrator Francis Day mentions that Bhagwan Vishnu visits the earth to check on His subjects along with His devotee Bali.

Just like Dravidianists try to appropriate Pongal (Makar Sankranti) and dissociate it from Hindu Dharma by calling it a ‘Tamil’ festival, so also attempts are being made by the Abrahamic-Communist cabal to project Onam as a ‘secular’ festival.

Hindu itihasa and astronomical evidences place the rule of Mahabali in 11,160 BCE which pre-dates Abrahamic cults by several centuries. In essence, it demolishes the false notion that Onam is a ‘secular’ festival.

The evidence demolishing the secular claims comes from the Church itself which calls it a “Hindu festival”. It is possibly the lack of enough causes to celebrate that makes missionaries prey on so-called Pagan festivals and it is certainly the hatred for Hindu Dharma that makes the leftist and secular cabal to cheer this theft.

It is high time the Abrahamic-Dravidian-Communist-Secular cabal stops appropriating every Hindu festival. The converts are, of course, always welcome to do a Ghar Wapsi (returning to Hindu Dharma) if they so desire.