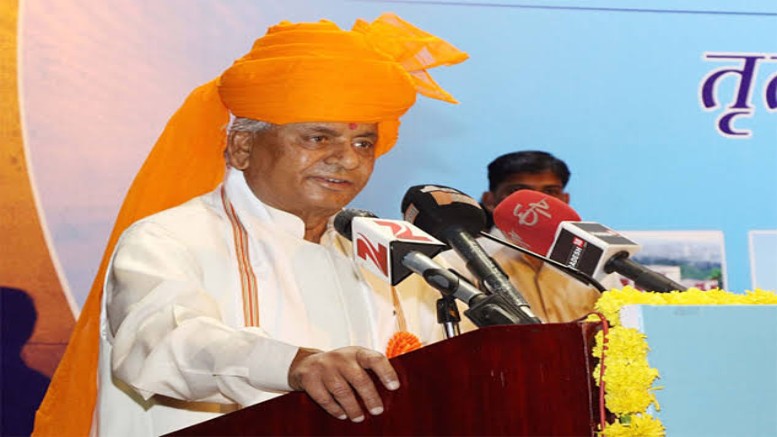 We have politicians who hop from temple to temple in election season. There are also politicians who visit temples and do puja only for symbolism. But there was a chief minister who said that the CM post is nothing infront of Prabhu Shri Ram. He was one of the personalities who spearheaded the Ram Janmabhoomi movement and engineered the turning point of Hindu history in the modern world. It was Kalyan Singh, the unapologetic Hindu.

Born to Tejpal Singh Lodhi and Sita Devi on January 5, 1932, Kalyan Singh served as the CM of UP 3 times. He took oath as the CM in June, 1991, the first time. Nowadays politicians worship the constitution and prostrate before the parliament. But Kalyan Singh, as soon as he was sworn-in, went to Ram Janmabhoomi and had darshan of Ram lalla. He vowed that “in my tenure as the Chief Minister of UP, a temple of Shri Ram will inevitably be constructed” then and there.

Kalyan Singh had a good understanding of the Hindu society and its civilizational issues. When he was asked how he felt when he looked back at the events of Dec 6, 1991, he said “I would call it divine providence. In 1528, Mughal ruler Babar’s general Mir Baqi demolished the Ram temple at Ayodhya not because he wanted to build another place of worship, but because he wanted to insult Hindus.” He was elated that the domes of the masjid were brought down in his tenure.

In his affidavit to the Liberhan commission that put the blame of demolishing Babri Masjid squarely on him, he wrote, “an act of God..whatever happened on that day, the deponent has no regret, no repentance, no sorrow, and no grief for that.. (future) historians will record that Rama’s devotees and patriots demolished that structure, which symbolized slavery and stain. The disputed structure was a Ram temple and will always remain so.”

In the current times Hindus are shot at for taking out a procession and assembling to celebrate festivals. But Kalyan Singh not only stood steadfast against the pressure tactics of the liberal anti-Hindu gang, but helped the Hindu organisations and Karsevaks in achieving their goal as well.

While recalling that day he confessed, “I am proud of my decision as today I can proudly say that I might have lost my government but saved Karsevaks.  I got a call from the district magistrate of Ayodhya saying that nearly 3.5 lakh Karsevaks were assembled . I was told that central forces were on the way to the temple town but their movement was halted by Karsevaks”. Despite the pressure he refused to grant permission to open fire at the Karsevaks.

The then PM Narasimha Rao is said to have made a note about pros and cons of trusting Kalyan Singh in protecting the masjid. Kalyan Singh had given in writing to SC that he’ll protect the structure. Apparently he wrote in cons that ‘Kalyan Singh has consistently shown his disinclination to use force against religious leaders and kar sevaks’.

Many leaders who spearheaded the RJB movement back in the 90s later went back on their words and issued politically correct statements to stay relevant in politics. However Kalyan Singh, similar to how he fulfilled his promise of building a temple for Ram Lalla, resigned his CM post after the demolition of the masjid taking moral responsibility for the same.

Never in his life did he apologize for what happened that day or his actions thereof. CBI wrote in its affidavit that, Kalyan Singh in a public address at Lucknow in 1993 said, “Vivadith dhanche ki suraksha na kar pane ka unhe koye afsos nahi hai, kyonki ve 464 saal purana gulami ka chinh tha (I don’t regret not being able to protect the controversial structure because it was a 464-year-old symbol of slavery).”

In the aftermath of the masjid’s demolition, apart from losing Chief Ministership, Kalyan Singh had to pay Rs.2000 fine to the SC and was lodged in Tihar jail for 24 hours. Even then he didn’t regret losing power. He rather said that political power is a temporary thing and that ‘the post of Chief Minister was nothing in front of Bhagwan Ram’.

He had expressed his wish to see Bhavya Ram Mandir in his lifetime. Naturally he was happy when all the hurdles for building the mandir were removed and Bhumi Pujan was conducted. He was euphoric when the Bhumi Pujan was conducted and said “My lifelong dream is fulfilled now. I can happily embrace death now”. Unfortunately he couldn’t see the temple come up in the true sense and passed away. Let us hope Prabhu Shri Rama grants his other wish of being reborn in Ayodhya in his next life. Om Shanti.

340 people booked under anti-conversion law in UP