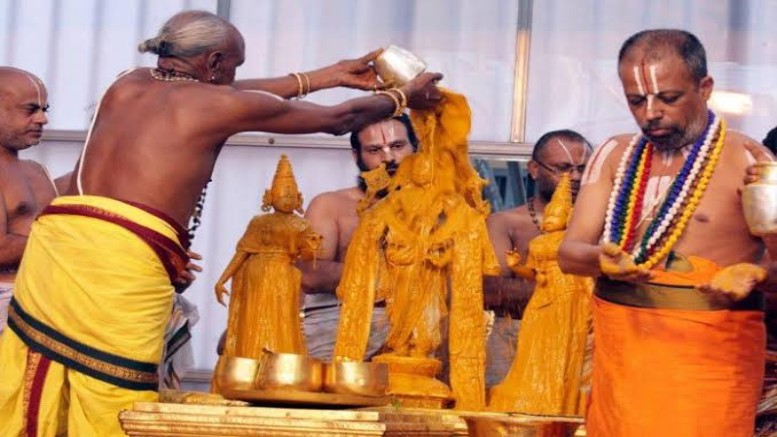 When BJP played on front foot in Tamil Nadu by raking up the issue of freeing temples from government control, everyone thought it might be the beginning of cultural renaissance in Tamil Nadu. However, like it disappointed the Hindus of Uttarakhand by taking over Char Dham and 51 other temples, the party has sided with DMK in letting the government interfere in temple affairs.

A few days ago the DMK government’s HRCE minister announced that people from all castes who are ‘trained’ in Agama Shastras will be ‘appointed’ as priests and emphasized that women who would ‘love’ to do the job also will be given a chance. Even as Tamil Hindus were criticising the DMK government for this move, the State BJP unit has issued a statement endorsing the same.

Without even trying to understand the issue, left liberals and ‘reformist’ Hindus have started commenting that there is nothing wrong in such an initiative and welcomed TN BJP’s statement. It is not that only one community should be priests. It is not that women shouldn’t be priests either. It is that temples should run as per the rules otherwise known as Agamas defined for their functioning.

Every temple is unique in following sampradayas and specific customs. Even temples that follow the same Agama do not follow the same set of rules for everything. Thus it becomes imperative that each temple is run as per the rules set down for their functioning. But the government, despite being secular, doesn’t want to give up the hold it has over the temples and wants to run them as secular institutions.

TN BJP’s statement listed out a number of temples where OBCs and SCs including women perform the priestly duties. There are many such temples across TN, and these temples which don’t follow Agamas or defined as a denomination are set to be targeted by HRCE as a 5 member SC bench ruled that scriptures should be followed in the temples that follow Agamas. BJP seems to have not understood this and has batted for ‘people with proper knowledge of Agama Shastra’ being appointed in such temples. It is to be noted that imposing Agamas on temples that don’t follow them also goes against religious freedom.

Whether or not the DMK minister had the intention to ruin the 1000 year old traditions followed, BJP seems to have given them leeway by supporting such action (DMK didn’t enthusiastically pursue its pet project of making people from all castes as archakas). Unfortunately it will be the non-Agamic and temples without denominations in most of which OBCs, SCs and STs are priests that will be affected. While claiming to work for the socially backward communities, DMK is actually set to target them in practicing their religious rights.

However this is being touted as a great move to neutralise DMK’s diversionary tactics and an attempt to damage BJP’s reputation. BJP had conducted Vel Yatra (Vel is the spear of deity Murugan/ Skanda) to gather Hindus under its pro-Hindu alliance and even supported the Free TN Temples campaign initiated by Sadguru Jaggi Vasudev during the assembly election campaign. But now it has not only gone mute on freeing temples from government control, but has supported a move of DMK that directly interferes in the religious aspects of temples.

Now, the HRCE department has rights to administer temples on the economic front only. Even in that regard, many times, courts have been scathing while criticising the mismanagement and corruption in the HRCE department. But now under the aegis of the atheist DMK, the department is going to directly interfere in the religious affairs by meddling in the appointment of priests.

Earlier TN Finance Minister had claimed that only kings built the temples in the past and that the government which is ruling the land in their stead should manage the temples too. Unfortunately Hindus also have the same false notion that kings of the yore and CMs, PMs of the current system are one and the same. However the kingdoms of the past and their kings were Hindus and so when they built and managed temples it made sense. But it is illogical for a secular government with atheists as rulers, who have expressed their hatred for Sanatana Dharma time and again, to manage the same temples. It should also be kept in mind that unlike the kings who built majestic temples, the secular government is actually destroying them in the name of renovation.

Thus BJP’s decision backing DMK in appointing priests exposes its commitment to the Hindu cause. In a state like TN, a pet project of Breaking India forces on social engineering, BJP’s stand is nothing short of betrayal. Perhaps the party should mend its ways before it’s too late like the Sabarimala issue. Curiously both BJP and DMK have maintained conspicuous silent on the plight of ‘Dalit Christians’.

Recently they protested against the appointment of a ‘non-dalit Christian’ as the bishop of Salem diocese despite repeated requests to appoint one of their own as the bishop. “Only one of Tamil Nadu’s 18 archbishops and bishops is of Dalit origin even though Dalits make up about 70 percent of the state’s Catholic population”, said the convener of the All Dalit Christian Movements Coalition, G.Mattheew. DMK, despite fighting for social justice, has not extended its helping hand to ‘Dalit Christians’ who have been fighting for priestly rights in the Catholic church.