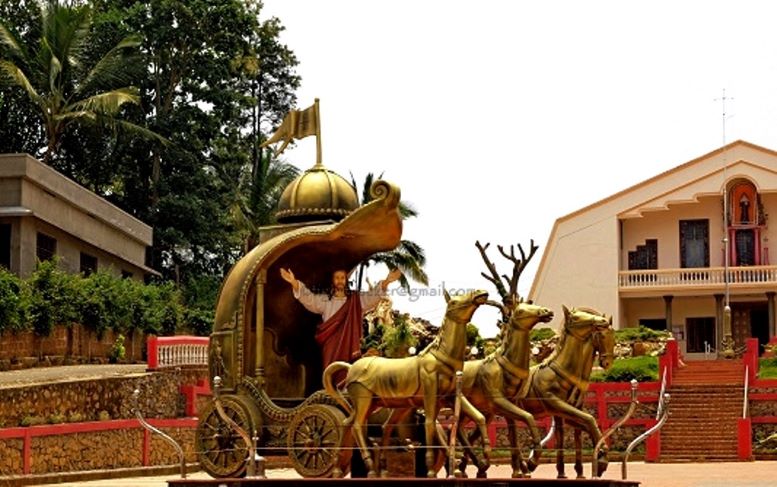 Christianity and deception go hand in hand. It has been the studied methodology of Christian missionaries from the time of Emperor Constantine to use fraudulent means where war, coercion, threats, and tortures failed to work.

Much of the symbolism we see in Christianity today has been shamelessly copied from earlier Pagan communities that they wiped out. Truth is people, though converted to Christianity by the sword, found it hard to give up their old ways. Then, the Vatican devised the method of defrauding people into accepting Christianity by usurping symbols of Paganism. It should, therefore, hardly come as a surprise when we see history repeating itself in Bharat.

A quick look at what they did in Europe will help us identify what they are repeating here. The entire story of Jesus’ virgin birth is lifted lock, stock, and barrel from earlier traditions such as Isis/Horus, Juno/Mars, and Cybele/Attis. In fact, most Christian rituals are simply Mithraism in a new form. Mithra’s attributes were transferred to Jesus, including the birth date.

Everything, from the Pope’s dress and staff to the concepts, is a direct subversion of Pagan traditions to make Christianity palatable to the masses. Hence, it shouldn’t be astonishing that the same methods have been used here.

Who would believe that there are ‘Christian Brahmins’? The caste system, which was said to be oppressive, is used as leverage to convert gullible people. They depict their ‘Padres’ as saints or Swamijis, just like Hindus do. It isn’t uncommon to see Christian pilgrims donning ‘saffron robes’ and ‘Tulsi malas’ (with the cross, of course). This kind of deception was started by French Jesuit Robert de Nobili, who came to India in the early 17th century, and such fraud is in practice even today.

Churches dotting the landscape in South India are exact replicas of Hindu temples, including the Dhvaja Sthamba, save for the cross on the Gopuras and Christian figures on the vimanas. The deception doesn’t stop here; there are temples where Mary is shown holding an infant Ganesha instead of Jesus. Even the holy lamp Hindus use during significant festivals and events have been replicated.

For a long time, I didn’t know there was something known as ‘Jesus Surya namaskar’. Believe me, or rather the missionaries, that such yoga exists, as does Christian Vedas. Who would’ve in their wildest dreams imagined that Bhagwan Krishna’s ‘Gitopadesh’ would be shown as Jesus delivering a lecture atop a chariot pulled by reindeers? They’ve even started aping our concept of distributing prasad and taking out processions, complete with the Chendas (percussion instrument used in Kerala for temple festivals particularly).

This sort of fraud is especially rampant in the South. There are numerous such examples and the threat is very much real. Even tribal communities were up in arms against such blatant misuse of their traditional symbols. Everything from our Vedas to music and dance forms has been replicated using Christian names, just like they did in Europe.

Symbolisms matter because, in the long run, they would confuse the generations and push them to submission. That is precisely why missionaries and evangelists learn the local languages and traditions. They then slowly replace Hindu symbols with Christian ones. By hook or crook, mostly the latter, seems to be their modus operandi.

They operate on the principle “weaken the foundation from within and the building is sure to fall”. It is, therefore, essential to make Hindus aware of the deceptive methods adopted by evangelists. There is no doubt that Christians are the biggest harvesters of souls. It is easier to fight a terrorist with a gun than a cheat armed with deception.