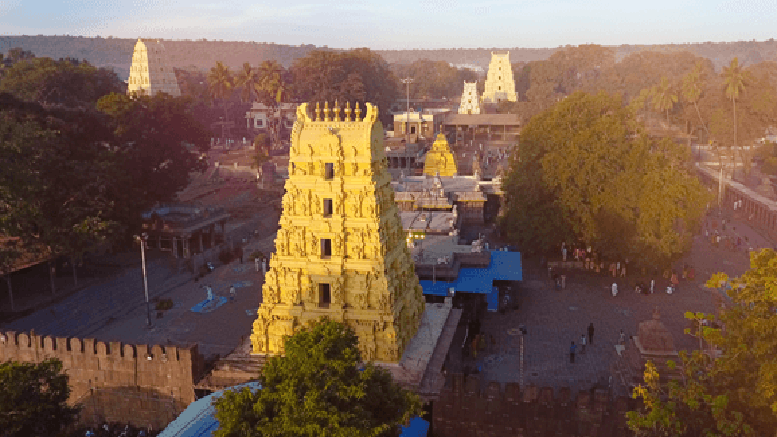 Bhramaramba Mallikarjuna temple is located in Srisailam in Kurnool district of Andhra Pradesh. The temple is on the top of the Nallamala hills situated on the banks of River Krishna. Krishna River here is called Patal Ganga. One has to go down 852 steps to reach the river. The Shiva Linga is bathed with the water of this river.

Bhagwan Shiva in this temple is referred to as one of the twelve Jyotirlingas. This temple is classified as one of the Paadal Petra Sthalam (one of the 275 temples that find mention in the Saiva canon). Among the 12 Jyotirlingas, the 2nd is the Mallikarjuna Swamy Lingam; among the 18 Maha Shakti Peethas, the 6th is Sri Bhramaramba Devi temple. Thus, this temple has a unique combination of Jyotrilinga and Mahashakti peeta  (i.e.,one of the 18 Shakti peetas) at one place which is very rare. In scriptures Srisailam is also known by other names like Sirigiri, Sriparvatam and Srinagam.

During 735-755 C.E, Dantidurga, the ruler of the Rashtrakuta Empire ruled the lands in and around Sriparvatam. During 980-1058 C.E, Kalyana Chalukyaraju, Trayalokamalya Deva established a gopuram on Garbhalayam. His grandson during 1069 C.E donated a village to Srisailam for choultries and Dharamshala. By the end of the 11th century, Srisailam has earned the reputation of Maha Shiva temple and a temple that is home to Vedas.

Rulers of the Hoysala dynasty collected Crystal Shiva Lingams from Patalaganga near the Krishna River in Srisailam and constructed numerous temples using them. Prataparudra (1289-1323 C.E) who hails from the Kakatiya dynasty accompanied by his wife visited Srisailam, performed Tulabhaaraseva and earned the blessings of Sri Mallikarjuna Swamy and Bhramaramba. Reddy Rulers of the 13th century played an important role in developing Srisailam.

History say that the gopuras in the southern, eastern and western sides of the temple were constructed by Sri Krishnadevaraya. The icon of Maharashtra, Sri Chatrapathi Shivaji who was a devotee of Sri Mallikarjuna Swamy and Bhramarambika Devi did the construction of Northern Gopuram.

The earliest inscription found at Srisailam discovered recently is a label inscription of sixth century C.E., Brahmi script that mentions “Sarasa Paramatma” which is identified to indicate the name of a Siddha at this place drawing inference that this place was then known as a Siddhakshetra. Incidentally the Harsha Charita of 6th century C.E also terms Srisaila as Siddhakshetra. Thereafter the first historically significant inscription found at Srisailam relates to 1313 AD which belongs to Pratapa Rudra.

Skanda Puranam and Srisaila Khandam lucidly describe the origin and divine form of Parvati Devi which is known as Bhramaramba Devi. Arunasura a demon does penance and gets boon from Bhagwan Brahma that he will not face death from 2 legged or 4 legged living beings. Thereafter, Arunasura starts troubling the people and finally Parvathi Devi takes the incarnation of a thousand bees (Bhramara) and kills the cruel Arunasura and she chooses Srisailam to reside as Bhramaramba Devi as Srisailam is also dear to Bhagwan Shiva.

In the inner courtyard there are Nandimandapa, Veerasiromandapa, the temples of Mallikarjuna, Bhramaramba all are in a row from east to west. There are also other minor shrines like Vriddha Mallikarjuna, Sahasra Lingeswara, Arthanaareswara, Veerabhadra, Uma Maheswara, five temples known as pandava pratrishta temples, and nine temples known as Navabrahma temples in the inner courtyard.

At the centre of the Nandimandapa is a huge Nandi (Divine bull) of 20’by 10’ size facing the shrine of Mallikarjuna. To the west of Nandimandapa is Veerasiromandapa built by the Reddi King Aanaveema Reddi in 1378 C.E. In those days Veerasaivas (ardent devotees of Bhagwan Shiva) used to offer sacrifice of human body parts like heads, hands and tongue known as Veeracharam in this Nandimandapa.

To the west of Veerasiromandapa is Mukhamandapa situated. This was built by the Vijayanagara King , Harihararaya –II in 1405 C.E. This Mukhamandapa has Bhagwan Ganesh idol made of fine red stone – Ratnagarbha Ganapathy and forty handed Veerabhadra holding various weapons , four handed Bhadrakali , all made of black stone and in standing posture.  Pilgrims can touch the Shivalinga in sanctum sanctorum and perform Pooja, Abhishekam and Archana at this temple.

Srisailam temple has four main gateways in four directions. The east and south gateways are known as Tripurantakam and Siddhavatam respectively. The west and north gateways are known as Alampur and Umamaheswaram. These gateways indicate those temples, viz., Tripurantakam, Siddhavatam, Alampur and Umamaheswaram all famous shrines that are located in those directions at far off places within a radius of 100 KMs- 240 KMs from Srisailam temple.

How to reach Srisailam?