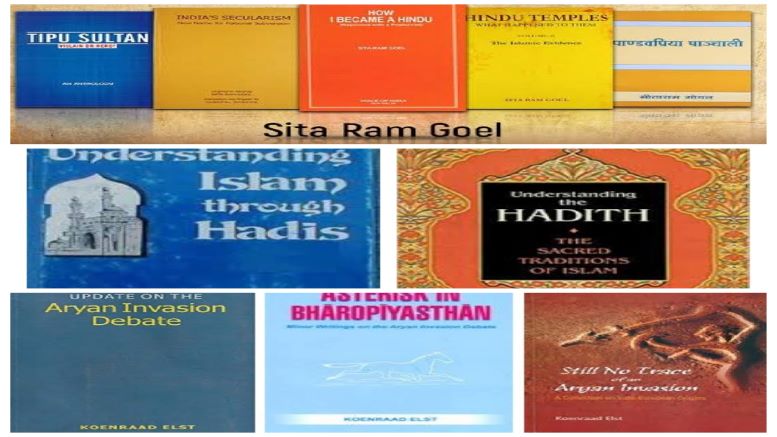 It is about time Hindus armed themselves with the knowledge required to take on the Abrahamics. There are a few books every Hindu Dharma warrior must read and equip himself/herself. We are compiling a list of such books as suggested by Twitterati HinduTrad in his tweet thread.

Every Hindu must begin their reading from this book which deals with the forces threatening the Hindu society and their international allies who are funding and abetting them in an attempt to “throttle it out of existence” in Shri Goel’s words.

The book talks about the strategy used by the British in ‘colonizing’ the minds of Bharatiyas and how the same mindset was perpetuated post-independence. It also speaks of there has been a lack of proper institutionalized intellectual response from the “right” as a result of which Hindus are suffering.

This is a critique and analysis of Christianity and Islam from the Hindu point of view. In addition to monotheism and prophetism, the author also discusses doctrines such as jihad, iconoclasm, mission, and conversion.

This work explains the Quran to the common Hindu using the backdrop of the petition filed against the Quran in the Calcutta High Court.

The story of Islamic Imperialism in India – Shri SR Goel

In this book, Shri Goel describes the history of Islamic invasions and the role of Islam in shaping the politics of Bharat.

The book talks about one of the basic tenets of Islam i.e. Jihad that Islam deems as religious or holy war. The concept of religious wars is characteristic of monotheistic faiths and alien to Hindus. Hence, Hindus are unable to decipher its true nature. The book also points out why Hindus must shed their indifference towards Islamic concepts and understand the real intent of Islam and Jihad.

The book besides dealing with the issue of Muslim separatism also analyses the reasons behind the Pakistan movement.

The book deals with the tenets of Islam as stated in the Hadis/Hadiths (teachings of Mohammad) and gets into the minute details of why they became a part of Islam.

The book deals with how Islamic crimes on Hindus have been purposely concealed much like how Nazi crimes were suppressed in the West.

Psychology of Prophetism: A Secular look at the Bible – Dr. Koenraad Elst

The book delves into the origins of prophetic religions like Christianity and analysis Jesus, Bible and Christianity from a secular point of view.

In this book, the author has explained how aggression has been unleashed on Pagan faiths by Christianity using Jesus Christ as a medium.

The author explains how Christian missionaries appropriate Pagan customs and traditions to spread Christianity. The book exposes missionaries that masquerade as ‘ashrams’ to convert Hindus.

The book takes a detailed look into Abrahamic religions, monotheism and discusses their early history along with their aggressiveness.

The book deals with the influence of Pagan Egypt on monotheism in general and Judaism in particular. It explains normative inversion (used to suggest that some aspects of Judaism were formulated in direct reaction to Egyptian practices and theology) and mosaic distinction in detail.

Of God and Gods: Egypt, Israel and the rise of Monotheism – Mr. Jan Assmann

This is another book that delves into the early history of Judaism and monotheism.

The book presents an analysis of Godse and Gandhi’s role in partition, his crimes against Hindus.

Hindu Temples: What happened to them (Volumes 1 & 2) – Shri SR Goel

In this two-volume book, Shri Goel discusses the destruction of Hindu temples by Islamists.

Worshipping False Gods: Ambedkar & the facts which have been erased – Shri Arun Shourie

This book is a critique of BR Ambedkar.

This book is a sequel to “Hindus under siege” and provides Hindus the necessary ammunition to take on Abrahamics and liberal-secular brigade.

How I became a Hindu – Shri SR Goel

This book provides some exciting insights into the journey of Shri Goel from a Gandhian to a Communist and ultimately an adherent of Hindu Dharma. There is much to learn for a Hindu novice from this fascinating journey.

This book is a must-read to understand how the trio of Islamic radicalism, Communism, and Dravidianism along with Dalit identity politics is being used by Western forces to foster separatism in Bharat.

In this book, the author makes an apt case for why tolerance is not the answer to the notion of ‘universalism’ as is being propounded by the West today.

Here the author unravels the British plot to keep Bharat subjugated by using dubious methods to conceal the true nature of the East India Company and the British Empire. It brings out crucial facts and events that led to the establishment of the British Empire in Bharat.

Pakistan Or The Partition Of India – Shri BR Ambedkar

In this book, Babasaheb presents an in-depth analysis of the genesis of the creation of Pakistan. It presents an exhaustive and balanced view of the partition and provides an insight into the unheard side of partition.

In today’s day and age, knowledge is power and every Hindu must equip himself/herself with adequate knowledge of both Hindu Dharma and its opponents to take on the so-called secular brigade.