Tripura on boil after rally in support of Bangladeshi Hindus; fake news of ‘mosque vandalized’ amplified, real attack on Hindu temple and Hindu youth glossed over 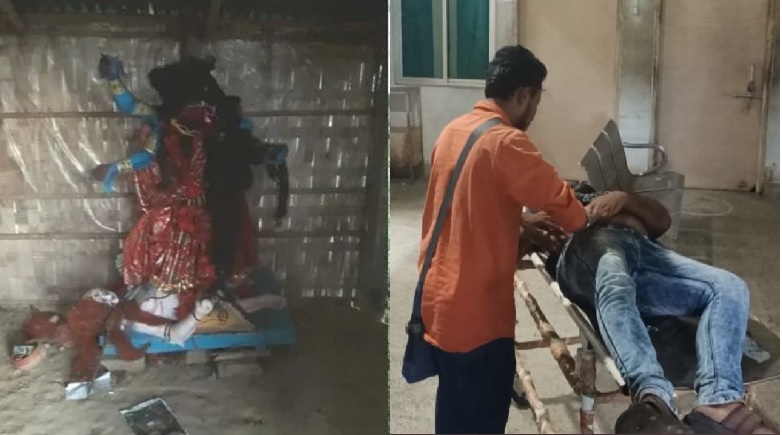 The anti-Hindu pogrom in Bangladesh that started during Durga Puja and left hundreds of Hindu temples, homes and shops destroyed and several Hindus dead or raped, has ignited a series of protests across the world. On Tuesday, Vishwa Hindu Parishad (VHP) leader Purna Chandra Mandal took out a protest in Panisagar near Dharmanagar town, North Tripura district.

The protestors shouted slogans against the pogrom and wanted protection for the Hindu minorities in Bangladesh, something that the Sheikh Hasina government has abjectly failed to provide over the years, with the latest cycle of violence just being the latest round after similar violence occurring almost on annual basis from 2012 onwards, apart from everyday violence and targeting of Hindus. The administration there is busy blaming Bharat, and is even warming up to Pakistan as a warning to Bharat.

This became a trigger for Islamists on social media to flood fake news that mosques were vandalized and/or burnt. Serial liar and hate propagandist Rana Ayyub called it a ‘precursor to genocide’, and this is the same person who has yet to utter a word on the actual genocide going on in Bangladesh and ethnic-religious cleansing of Hindus in West Bengal, Bharuch, Aligarh just this year.

Islamist handles made wild claims that “12 mosques in five districts of Tripura were desecrated or burned”, and Indian Express ‘journalist’ Samriddhi K Sakunia claimed “15 mosques were vandalized and three mosques were completely destroyed” over the last week. Islamist bigot, fake news peddler and Newslaundry columnist Sharjeel Usmani, who has called entire Hindu society as “rotten” at a Maoist gathering, also chimed in. Fake images and videos were ciruclated.

A PTI report ran the headline ‘mosque vandalized’ while the article states that the door of a mosque got damaged during stone pelting. Police has still not been able to confirm who started the stone pelting when the VHP rally reached Rowa Bazar – VHP has said that unrest started when outsiders joined and some Muslim youth had tried to provoke the rally.

The next day Tripura Police tweeted that no mosque was burnt during the protest rally in Panisagar. They clarified that pictures being shared of “burning or damaged masjid” were fake and not from Tripura.

Police has registered a case against the viral fake posts on social media platforms.

Attack on Hindus brushed under the carpet

While the disturbances in Rowa got heavy media coverage, disturbances in Kadamtala tehsil area of North Tripura district got scant coverage. Here a Muslim mob attacked houses, shops and vehicles belonging to Hindus. In videos posted on social media, the Muslim mob can be seen marching with sticks in hand.

A large number of Muslims also gheraoed the Irani police station of Kailashahar, in neighboring Unakoti district late on Tuesday night. A lady police officer was seen pleading with them to return to their homes.

This led to some counter-mobilization by Hindus in nearby Churaibari area. There were reports of some vehicles coming from Assam being attacked at night on the National Highway. Prohibitory orders have been issued under section 144 in Dharmanagar sub-division in North Tripura district and Kailashahar sub-divisions in Unakoti district in Tripura following this.

Videos of Islamist radicals issuing provocative threats and warning that Hindus would not be allowed to celebrate Kali Puja (it falls on November 4 this year) in Dharmanagar were seen on social media.

On Friday (October 29), after Friday namaz, a Maa Kali temple was attacked by a Muslim mob in Kailashahar in the Unakoti district around 4 PM. They broke the murti and vandalised the temple. In a separate incident, ABVP worker Shibaji Sengupta was attacked by members of the Congress student body NSUI and the Trinamool Chhatra Parishad. He sustained serious injuries and was rushed to the hospital.

Indian Express tried to water down the Kali temple vandalization, giving the impression that only the thatched walls of the temple were damaged and claiming that ‘local Hindus and Muslims came together and rebuilt the temple’s thatched walls within a few hours’. Pictures of the attack clearly show that the Maa Kali murti was desecrated and broken.

Interestingly, local Hindus have been reporting other attacks on Hindu temples prior to the violence that started on October 26. Indian Express dismisses those attacks in a way only our liberal-secular Hinduphobic media can –

“On October 23, images of a broken Shiva idol went viral on social media and netizens sharing the post claimed that the idol was vandalised by ‘jihadis’. Police later said the Shiva idol, whose head was found broken, was in an abandoned place atop a local hillock, where one had to walk 45 minutes through thick vegetation to reach. They said there was no way to tell if it broke owing to natural causes or if it was broken and said the incident didn’t have any communal spillover in the locality.”

Take a look at the beheaded Bhagwan Shiva murti shared by a local Hindu.

Is there anyway that the head could have come off due to ‘natural causes’? And if a crime doesn’t have ‘communal spillover’, does it mean that it is not an offense? Indian police has a habit of playing down attacks against Hindus in interest of ‘maintaining harmony’, a practice the rest of the world calls ‘sweeping it under the carpet’. But if police did indeed give this bizarre explanation to play down the beheading of a Shiva murti, shouldn’t journalists be holding them accountable?

Next, Indian Express talks about another attack on a Hindu temple:

“A few days later, some people in Kamalasagar area of West Tripura district said an abandoned Kali idol was burnt by miscreants but police later dismissed the suspicions saying people often left burning candles in front of the idols after puja. The idol’s hair might have caught fire from the candles, police said.”

If a murti is ‘abandoned’, how come people are still praying to it? Hindus light candles or place diyas at the foot of the deity, they don’t place a candle on the deity’s head. The police and mainstream media need to come up with some better excuses!

Tripura is like an oasis in the desert for beleaguered Hindus in that part of the world. Surrounded by Islamist Bangladesh on the left and Christian extremist Mizoram on the right, it is home to persecuted Hindus and other Dharmic minorities (like Buddhist Chakma) from both.

The Bru (aka Reang) Hindu tribals expelled by Christian fanatics in Mizoram had to be resettled in Tripura after Mizoram refused to let them stay as equal citizens. At 83.4%, Tripura has the highest percentage of Hindu population among all 7 North Eastern states (Assam has 61% and Manipur has 41% as per Census 2011).

The sites of frequent anti-Hindu violence in Bangladesh such as Cumilla, Brahmanbaria etc. are all close to the international border that falls in Tripura.

The significance of this tiny state cannot be overstated. Ensuring that it avoids the same sort of planned demographic aggression and associated Hindu persecution that has afflicted states like Assam, West Bengal and Uttarakhand is of paramount importance.