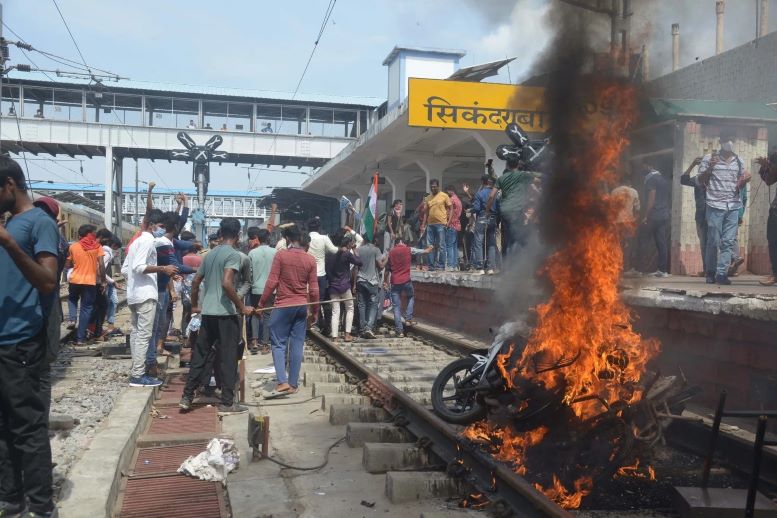 The child rights body instructed the police to register an FIR. The body has taken cognizance as per section 131(l)O of the NCPCR Act, 2005. The commission stated that prima facie evidence suggests a violation of the Juvenile Justice (Care and Protection of Children) Act, 2015 and relevant laws. It also instructed the police to produce those children in the video before the child welfare committee. The commission has sought an action taken report within seven days.

In its letter, the child rights body notes that children have been used as political tools in protests. “As per reports and videos which have surfaced on social media, a shocking revelation shows a video wherein several children in Hyderabad are seen raising slogans of ‘Sar Tan Se Juda’ and demanding that Shri T. Raja Singh, a BJP MLA be hanged”, the letter says.

Not just children, but even women have been demanding the Taliban-style beheading of Raja Singh.

T Raja Singh was arrested on August 23 on charges of ‘blasphemy’ against Muhammad. He was granted bail on the same day. Islamists were on the streets protesting the whole night chanting slogans calling for Raja’s beheading. Raja’s attorney highlighted in his argument that the MLA wasn’t served notice under Section 41(A) of the Criminal Procedure Code. The court accepted the argument and granted bail to the leader.

There were protests against the leader in several places including Amberpet, Tallabakatta, Mogalpura, Khilwat, Bahadurpura and Chanchalguda. There were violent clashes between the protestors and the police in Shailbanda where police vans were set afire. The police had to resort to lathi-charge and firing tear gas shells to disperse the crowd.

“On Monday, 22nd August 2022, BJP MLA T Raja Singh made a video criticizing so-called comedian Munawar Faruqui. In this video, while talking about Islam, T Raja Singh talked about an elderly person, which Muslims said that it is an objectionable comment made about Muhammad. However, T Raja Singh said that it was a joke. This was followed by protests across the city. On Tuesday morning, police arrested T Raja Singh. In the afternoon, the BJP suspended him from the party and then the court sent him to judicial custody for 14 days”, noted OpIndia.

STSJ sloganeering has become a standard Islamist threat. In recent times, Islamist radicals have continuously threatened to behead people for so-called blasphemy. Last year, lakhs of Islamists had congregated at the Bareilly STSJ rally asking for Dasna Devi Mandir Mahant Swami Narsinghanand to be beheaded for his alleged blasphemous comments on Mohammed.

This June two instances of Muslim extremism came to the fore. In the first instance, Muslim leader Maulana Mufti Nadeem openly threatened Hindus in the presence of the police in Rajasthan’s Bundi. The second instance of such radical Islam came from Uttarakhand’s Haridwar, coincidentally one of the holy pilgrimage sites of Hindus. Here too police were present when the ‘gustakhe nabi ki ek saja, sar tan se juda’ (insult of Mohammed will be avenged by beheading) slogan was raised.

Islamists have repeatedly involved children in their nefarious plans. This is the latest instance of children being radicalized.