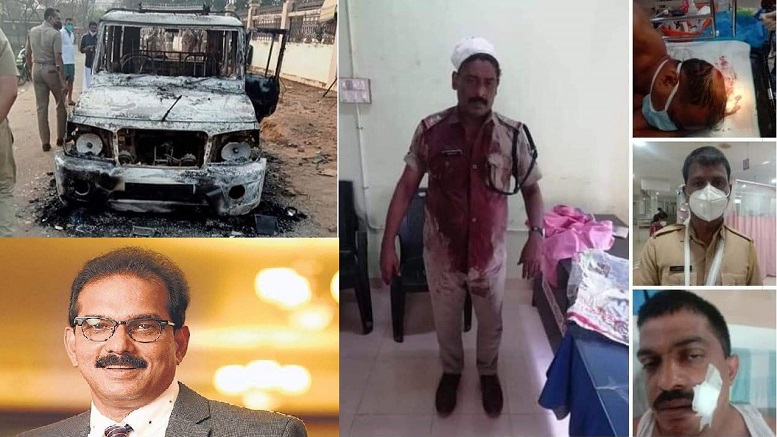 Around 500 migrant workers living in labor camps inside the Kitex factory at Kizhakkambalam near Ernakulam tried to burn policemen alive. Though they failed, they attacked with lethal weapons and seriously hurt 5 police personnel including Circle Inspector VT Shajan. The mob also burned one police jeep and another four were vandalized beyond recognition.

Apparently what happened is that Christian migrant workers from Nagaland and Manipur were celebrating Christmas. They sang carols and danced away late into the night and Muslim migrants attacked them. Alcoholism is a serious issue and locals said that even on normal days, passing through the area after 8 pm is risky.

A  scuffle broke out around 11.30 pm and the workers fought amongst themselves attacking each other with stones, sticks and beer bottles. Security staff attached to the labor camp intervened but they retreated after they too were beaten up.

Hearing the commotion locals who approached to inquire were pelted with stones. They alerted the police and when the Kerala Police arrived all the migrants united and attacked the police.

Videos surfaced where a mob was seen trying to attack policemen sitting inside their vehicles and they did not allow the policemen to get out. The policemen somehow escaped but not before they were beaten with iron rods and stoned. Locals escorted the injured policemen through small bye lanes and they were admitted to hospitals.

Additional police personnel reached the scene but the stone-throwing continued. Policemen approached neighboring houses asking for two-wheeler helmets to protect themselves. Even more police including the rapid action force had to be brought in and by then it was 6 in the morning.

For reasons best known to Kitex Group chairman Sabu M Jacob himself, the company does not employ locals. Unending labor issues that local Keralites create are often blamed. An estimated 6000 migrants are stuffed into dimly lit filthy quarters and many more are housed in and around the region.

Who are these migrant laborers? Even though many have indulged in serious crimes, politicians and the local media affectionately call them guest workers. This is in spite of the fact that there is specific intelligence about Rohingyan Bangladeshi infiltration into Kerala. To avoid detection, they come disguised as ordinary workers.

Political outfits like the CPM, Congress, Indian Union Muslim League and the Popular Front of India welcome these migrants as long as they are not Hindus. Coincidentally, Kitex MD Jacob too is involved in politics and is the chief coordinator of Twenty20 that rules Kizhakkambalam and has won multiple panchayats in neighboring villages.

Hypocritically enough, Twenty20 came to power in 2015 after they promised to make Kizhakkambalam an alcohol-free village. As if that was not enough, Jacob now says that he suspects that his workers who indulged in the rioting were under the influence of drugs!

There have been numerous occasions especially during the pandemic where these migrants have turned extremely violent. The ruling CPM provided their guest workers with carrom boards and LED TVs, using public money. They were also given free rations that the central government had provided and the communists shamelessly tried to take credit for the same.

Back then, guest workers reciprocated by throwing away food kits since they did not contain meat. Incidentally, Kizhakkambalam borders Perumbavoor, a crime hub. Migrants have indulged in violent crimes in and around the area. Hardcore al-Qaeda jihadis were recently arrested from here by the NIA.

Though the administration might try to deny it, the Christmas day violence could well be a trial run to check how the police and the locals react to violence. Crores of citizens from different parts of Bharat work in other parts of the country. Very rarely does one see such blatant attacks on police personnel?

A dangerous trend exists in Kerala where various political parties are trying to provide Rohingyas and other terrorist elements with Aadhaar and ration cards. Their ultimate selfish aim is to supply these infiltrators with voter IDs. Pinarayi Vijayan has time and again reminded such drifters that Kerala is not in favor of the CAA law and that is exactly what is attracting them to states like Kerala and West Bengal.

Lakhs of migrants from West Bengal are in Kerala partly because of the communists themselves. Having ruled West Bengal for 33 long years, they have handed over the baton to anti-Bharat/ anti-industry TMC and that is forcing many to flee in search of jobs.

From the initial responses, it is clear that petty charges will allow the few rioters who have been arrested to go scot-free pretty soon. Kerala Assembly speaker, MLA MB Rajesh was heard saying that this is a one-off incident and that ‘guest workers’ should not be troubled. This is exactly what Kitex’s Jacob too had to say.

25 Lakh migrants work in Kerala. The Kerala government barely has data about 1.5 lakh of them. Kitex now says that only they can identify the migrants who work in their factory and that they are scanning the CCTV footage. Who are these people and where did they come from?

Such responses from political leaders like Rajesh who is supposed to remain unbiased as a speaker, do little to raise the morale of our police force who have been beaten into submission primarily by the politicians and more recently by terrorist elements. Like West Bengal, Kerala too is fast becoming unsafe for the common man.