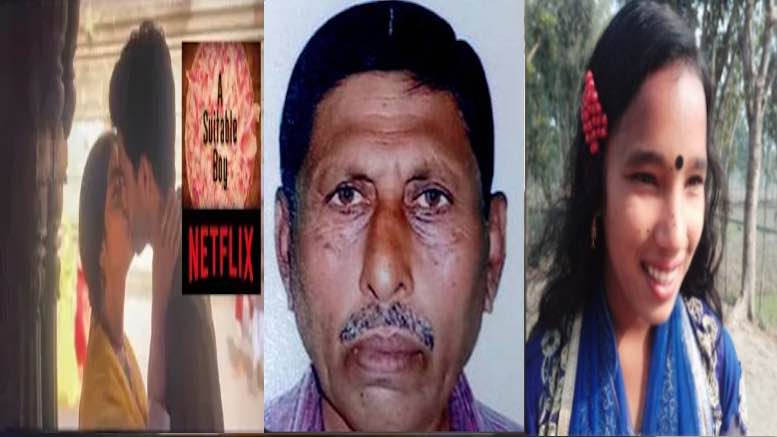 In this weekly summary for the period from 22 to 28 November 2020, we hope to provide a snapshot of such crimes and hopefully awaken more people around the world to this human rights crisis:

1.) A 13-year-old tribal girl was abducted by a 49-year-old pastor from a tribal hamlet in the Jawadhu hills located in Tiruvannamalai. Pastor Jayaraj is alleged to have indulged in preaching and evangelism in the village for four years in the garb of a social worker. Police, on investigating the pastor’s background has come to know that he was married twice but both the wives left him. They have slapped a case of kidnapping on the pastor and the search for Jayaraj and the girl is ongoing.

2.) OTT content continues to attack Hindu Dharma in the name of creativity and Netflix’s latest offering has yet again hurt Hindu sentiments by filming kissing scenes between the Muslim hero and Hindu heroine within the premises of a temple while arati is going on in the background. Mira Nair’s A suitable boy web-series like most others promotes the usual stereotypes where Hindus are always close-minded blood-thirsty aggressors out to get good-hearted Muslims who are always progressive and victims of majoritarianism.

3.) In another shocking case from Faridabad, Haryana, a group of Muslim goons barged into a Hindu house where Chhath Puja was being performed on 19th November and tried to abduct a young girl. The girl is a native of Bihar whose family had just shifted to Durga colony in Sarurpur a few months back from another part of Faridabad city.

4.) A Muslim man entered a temple in the union territory of Karaikal in Puducherry and made obscene comments about Hindu Gods and temple sculptures on a Facebook live feed. Manzoor Ali, son of Habeeb Ahmed, a resident of Ambakarathur in Karaikal, has been arrested in this regard.

5.) An Islamic mob vandalized and desecrated the Chatth Puja Ghat at Bihar’s Katihar district. The incident occurred on the morning of the Chatth Puja and as per locals a Muslim mob disrupted the Chhath Puja celebrations, and vandalized the ghats, leading to a communally-surcharged atmosphere in the area. Although the Hindus were able to observe Chhath Puja in the evening, there were terrified by the events of the morning when a group of Islamists had stopped them from conducting the rituals. The Muslim mob had initially objected to the use of firecrackers but later resorted to vandalizing the Chhath ghat, destroying the paraphernalia, urinating, and defecating on the site.

6.) Hindu Mahasabha’s State Secretary Nagaraj was murdered in full public view by a group of unidentified assailants in Hosur’s Anumandha Nagar, Tamil Nadu. OpIndia says “as per reports, he was hacked to death by an unidentified gang at 8 o’clock in the morning near his residence, after they had convinced him to step out of his house. Other reports suggested that Nagaraj was out on a walk when the miscreants stopped their car in front of him and began assaulting him. When the victim tried to flee, the accused chased him down and murdered him in full public view. They then managed to flee the crime spot. He sustained cut injuries to his head and abdomen and died on the spot”.

7.) Another case of Grooming Jihad (Love Jihad) has emerged from village Behera in the Hazaribagh district of Jharkhand. A Muslim man got into a physical relationship with a Dalit Hindu widow. He hid his identity and portrayed himself as Arjun. When the woman asked him to get married, he told her the truth and said that he would marry the woman if she converted to Islam. The real name of the man is Mohammad Rahim.

8.) UP’s Gautam Buddha Nagar District Court sentenced one Sadab Alam to 20 years imprisonment along with imposing a fine of ₹25000 in a case of grooming a minor Hindu girl and kidnapping and raping her. According to Dainik Jagran, the incident occurred in 2015, after which a case was filed by the victim’s father with the Sector 49 police station. The father who was from Bihar had accused Sadab Alam of kidnapping his minor girl who was a class 10 student at that time. The convict is a resident of West Bengal.

9.) A case of grooming has been reported from Syana located in UP’s Bulandshahr district where the family of a 21-year-old Hindu girl accused a neighboring Muslim family of kidnapping their daughter and added that they feared for her life. In the complaint, the father alleged that two Muslim girls had visited their house on the morning of November 24 to speak to her daughter. Later, the two girls – Hina and Laiba, had asked the girl to come with them and she did so. When the girl did not return home in the evening, the worried parents began inquiring about their daughter’s whereabouts. The parents stated that one Rakesh Kumar, a friend of the family, informed them that the girl was seen in a white car with Faizal, Sonu, and Irshad. The car was seen going outside the city. All three men named in the complaint, along with the girls Heena and Laiba, are the children of one Mushtaq Malik.

10.) In a Kanpur grooming case, the victim was trapped by Sahil who identified himself as Sachin Sharma and later forced her to eat beef and have sex with a Maulvi in addition to being threatened that her newborn child would be murdered and her intimate videos would be made viral.
11.) In yet another incident of temple desecration and sacrilege, dozens of murtis of Hindu Devis and Devtas were discovered to be desecrated in a temple at Kailash Vihar Pansari in Begumpur, Delhi. The incident happened on the night of November 24 at the Shiv Shakti temple in Begumpur. The antisocial elements mainly separated the head from the torso of all the Murtis installed in the temple, left it behind and fled.
12.) Following the incident where dozens of murtis of Hindu Devis and Devtas were desecrated in Begumpur, videos emerged carrying visuals of severed heads of cows lying strewn on the streets of Delhi’s Ghazipur.
13.) A Hindu girl has sought the help of the Shivraj Singh Chouhan-led Madhya Pradesh (MP) government in a case of grooming and cheating where a Muslim man named Salman used a fake identity calling himself Umesh to trap and marry her and later began harassing and threatening her to convert to Islam. As per the victim’s statement, Salman even attempted to murder their child.
14.) Five accused including two women have been arrested in relation to a human trafficking case from Chhatishgarh’s Rajnandgaon district. As per reports, Sajda Saiyyad, Junaid Khan, Shubham Tiwari, Salman Khan and Ganga Pande were involved in the abduction of a woman who was sold to multiple buyers in Delhi and Haryana and raped by one of the accused as well.

19.) Another Hindu family’s land was grabbed by a local Muslim gang led by Mohammad Halim at Haripur, Thakurgaon district, Bangladesh

20.) A Hindu family was attacked and its property grabbed by a local gang led by Mohammad Sydur, Farhad & others at Manikganj, Dhaka district, Bangladesh.

22.) More than 100 Bigha & 74 decimals Hindu land has been taken over by local government for redistribution to poor Muslims in Nabinagar, Brahmanbaria district, Bangladesh.

26.) Homes of Hindu Bheel community were demolished by the government in Khipro, Sindh, Pakistan. After the news spread on social media & activists put pressure on govt., the demolition was stopped but a few days later local Muslims attacked to make the Hindus run away. Hindu men, women & children have been injured.

27.) A Bangladeshi man was arrested in Singapore earlier this month for his involvement in terrorism-related activities, the Straits Times has reported. Ahmed Faysal, 26, was arrested on Nov 2, and preliminary investigations by the Internal Security Department found he had been radicalized and intended to carry out acts of armed violence in support of his religion, the newspaper said citing a home ministry statement on Tuesday.