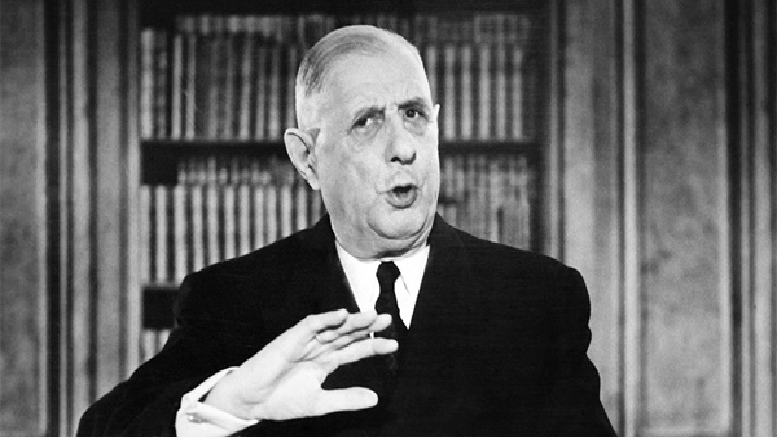 I can’t think of a better time in history to be reminded of what De Gaulle used to say about NATO and American hegemony over Europe. This is all extracted from the book “C’était de Gaulle” which gathers his words as compiled by his confidant Alain Peyrefitte.

He says: “France’s objective is to build Europe […] The whole point is that Europe should want to exist as its own self, independently from the U.S. [NATO is] quite simply putting Europe’s defense, nuclear and conventional, in the hands of the U.S. Europe is useless if it doesn’t control its own defense and therefore its own policy.”

Here below : “NATO is a subterfuge. It’s a machine to disguise the stranglehold of America over Europe. Thanks to NATO, Europe is placed under the dependence of the U.S. without seeming to be.”

He explains the “subterfuge” further: “Becoming used to submitting ourselves to a so-called integrated military command structure, which is itself submitted to the president of the U.S. alone, it is giving up the state and the country, it is losing our soul! […] Because our generals and colonels [would get] used to a command structure that’s denationalized, they would themselves denationalize.

They would lose the sense of the state and the nation, the respect of national hierarchy, without which there is no more army, no more state, no more nation. And what goes for the military leadership also goes for governments. If the government doesn’t assume the defense of the country, if it relinquishes this responsibility to the Americans, it loses its legitimacy and thus its authority. It doesn’t have the right to decide because it has renounced its duty to lead.”

On calling out American hypocrisy over NATO: “If [the Americans] do not want to allow us a say in their strategy, which is likely, well we won’t allow them a say in ours. They know that and that’s what annoys them. Their reproach when it comes to our nuclear force is that it forces them to admit a breach in their monopoly. We expose their desire to be hegemonic, hypocritically disguised as ‘integration’.

[My memorandum of 1958] was a way to pressure them diplomatically. I was looking for a way to exit NATO and be free again. […] So I asked for the moon. I was sure they wouldn’t indulge me. The Anglo-Americans wanted the ability to use force as they pleased, and they don’t want us for this reason. What they want is to dominate us.”

To the question “Do you really believe we can leave NATO without getting shot down by the Americans?” he replies: “Of course we can! That’s what we’re doing bit by bit. We’re detaching ourselves from the Americans whilst remaining good friends. The Americans know well, or at least should know, that one doesn’t rely on what’s soft. One should rely on what’s solid. […] In truth they’re always tempted to rely on what’s soft rather than what’s solid. In all under-developed countries they’re tempted to rely on rotten elements who are favorable to them – all the more favorable that they’re the ones who made them rotten in the first place -, rather than rely on solid regimes backed up by a true popular will; because they fear those types of regimes.

During the war they relied on Pétain or Darlan or Giraud against De Gaulle even though I incarnated the nation’s will. […] The Americans can’t prevent themselves from boosting as much as they can the career of a Jean Monnet [A/N: who is known as “The Father of Europe”] because they recognize he is their man and to oppose De Gaulle, because he resists them. However they should recognize that the U.S.’s best ally isn’t the one who bows down to them, it’s the one who can say no to them.”

Interestingly, he saw very much the same dynamic apply with American multinational corporations as with NATO: “The market has some good sides. It forces people to stretch themselves, it selects the best, it encourages you to be better than others and to improve yourself. But at the same time it creates unfairness, installs monopolies and favors cheaters. So don’t be blind when it comes to the market. One shouldn’t imagine that it’ll solve all the problems on its own.

The market isn’t above the nation or the state. It is the nation, it is the state that must be above the market. If the market reigned supreme, it would be the Americans who would reign supreme over it via the multinational corporations which are no more multinational than NATO. All of this is simply a camouflage for American hegemony if we follow the market with our eyes closed, we would be colonized by the Americans. We wouldn’t exist anymore, us Europeans.

In a way, it’s extremely sad to read all this from today’s vantage because he proved right on so many points. But it also highlights how incredibly prescient a man he was and how well he understood the dynamics at play. May we one day have another EU leader like him.

(This article has been compiled from the tweet thread of @RnaudBertrand.)