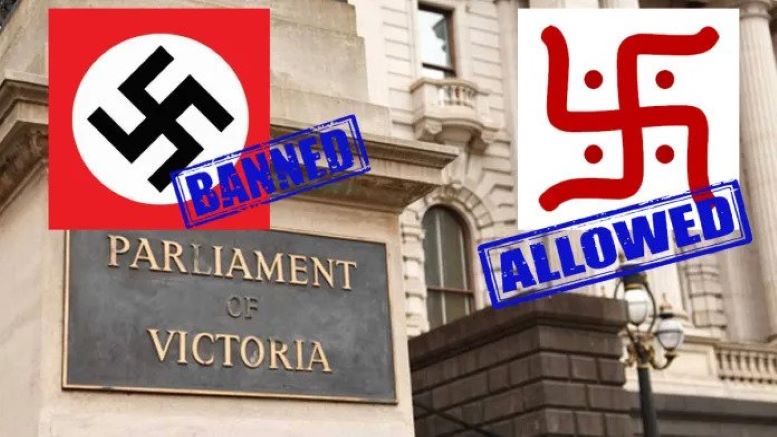 In a significant victory for Hindu organizations, the Australian state of Victoria has recognized the cultural and historical significance of the Hindu Swastika symbol. It brought in a legislation banning the public display of Nazi symbol Hakenkreuz.

The Summary Offences Amendment (Nazi Symbol Prohibition) Bill 2022 was introduced by the Andrews Labor Government. The Bill makes it a criminal offense to intentionally display the Nazi Hakenkreuz in public. After the bill comes into effect, anyone who intentionally displays the Nazi symbol in public faces penalties of up to almost $22,000, 12 months imprisonment or both.

The Premier of Victoria’s note in this matter said:

The Hakenkreuz is a symbol of hate and causes division and significant harm to Victorians, particularly to the Jewish community. The harm caused by hate conduct and vilification can be profound, affecting people’s physical and psychological wellbeing.

This landmark reform sends a clear message that the dissemination of Nazi and Neo-nazi ideology through the public display of the Nazi symbol has no place in Victoria.

The ban will be supported by an community education campaign to raise awareness of the origins of the religious and cultural swastika, its importance to the Buddhist, Hindu and Jain communities and its distinction to the Nazi symbol. The legislation will come into effect a year after passing to allow for time to implement this campaign.

The Government undertook extensive consultation with religious, legal and community groups on the offence, including to understand the religious use of the swastika and ensure exceptions are in place for appropriate displays of the Nazi symbol, such as for educational or artistic purposes.

The Government will continue to monitor the use of hate symbols and may consider the inclusion of additional symbols at a later stage.

At the same time, the Bill allows the Swastika to be displayed recognizing the significance it holds for Hindus, Jains, Buddhists, and other Dharmic communities. It identifies Swastika as an ancient and sacred symbol of peace and good fortune for the Dharmic communities.

VHP (Vishwa Hindu Parishad) and HOTA (Hindu organizations, temples and associations) Victoria played a significant role along with other Hindu/Bharatiya community organizations in ensuring that the significane of Swastika was recognized and it wasn’t equated with the Nazi symbol.