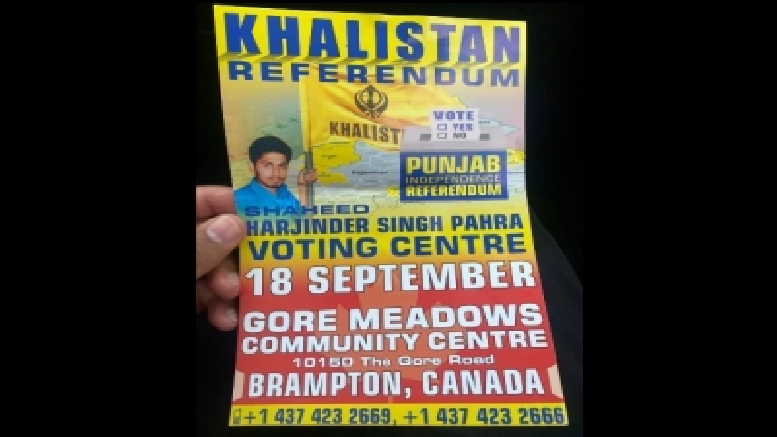 Palpable tensions prevails in Brampton city of Canada’s Ontario state, as the Khalistanis have launched a campaign to conduct a so-called referendum on the issue of creating a separate homeland for the Sikhs in Bharat.

The activists of the banned anti-Bharat organisation, Sikhs for Justice (SFJ), are distributing fliers at the entrance gates of different Gurdwaras asking Indians, especially Punjabis, to participate in the “referendum” on September 18 at a community center in Brampton.

The move is being staunchly opposed by pro-Bharat Canadians led by Azad Singh Goyat, an established community advocate and a politician.

Goyat has objected to the use of public property by Khalistanis who are putting up posters and fixing signboards to publicise the referendum date and venue.

“Illegal signs mushrooming on public property in Brampton need to be removed by the administration and the police. Why is the community leadership sleeping? Why is it not asking the government to curb the illegal actions of a handful of people?” says Goyat in a post on his Facebook page.

Goyat has issued an ultimatum to the administration and the police to remove the referendum campaign material from public properties by August 29, or else he will launch a people’s direct action movement to remove these illegal signs.

However, Harjinder Singh Pahra, a Khalistani engaged in referendum activities, says that people like Goyat are trying to create confrontation in the community. “We are peacefully doing what we want to do. There is massive support coming for the referendum. No one will be forced to vote on September 18,” he claims.

J.P.Pandher, a Punjabi journalist working for popular Omni TV says that the administration and the police can only act if there was a breach of peace from any of the two sides.

He agrees that Khalistanis can not legally use public property to publicise the referendum. They can only use private properties to paste and fix posters and signboards after taking the written consent of the proprietors.

It is common knowledge that the management of almost all Gurdwaras has slowly come under the control of radicals who with their muscle power win elections to form management committees. The Gurdwaras are then used to propagate anti-Bharat views. The silent majority of the Sikhs find themselves helpless before armed Khalistanis who even indulge in violence against peaceful people opposed to them.

(The story has been published via a syndicated feed with minor edits to conform to HinduPost style-gudie.)