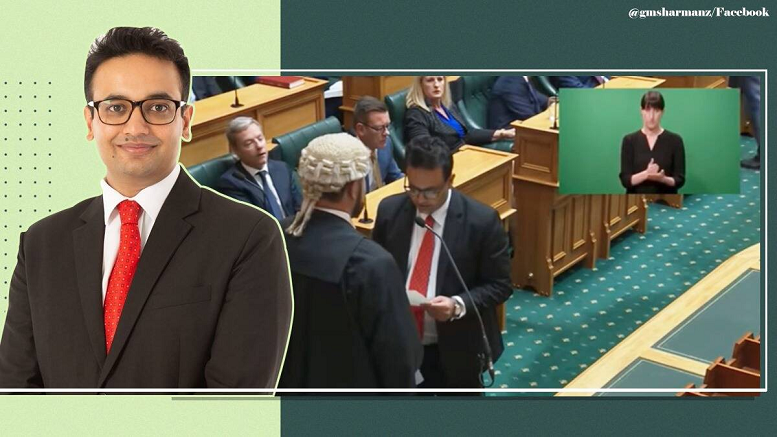 Dr. Gaurav Sharma, first-time and one of the youngest Members of New Zealand Parliament representing the Hamilton West constituency, made the Hindu and Maori communities very proud when he took oath in Sanskrit and Maori, both ancient and indigenous languages of the world.

Dr. Sharma’s oath taking in Sanskrit was well publicised in news all over the world and it was trending globally, thanks to social media.

Learning Sanskrit during his primary and middle school, have helped in fostering Dr. Sharma’s deep love for India’s ancient and indigenous language. Firmly rooted in his cultural and traditional upbringing, his courageous act displayed his maturity and responsibility.

“In New Zealand, Hindus have been contributing in economy, education, health, science & technology, and culture. Now, they are contributing in politics as well,” he added.

Members of Parliament representing our community have always made the Hindu community proud. For example, former MP Mahesh Bindra was the first MP to take oath on the Bhagavad Gita. Dr. Sharma is the first to take oath in the Maori and Sanskrit languages. Two-time MP, Hon. Priyanca Radhakrishnan, became the first Minister in the New Zealand Government.

Following the State Opening of the 53rd New Zealand Parliament, a reception was hosted by Rt Hon. Jacinda Ardern, the Prime Minister of New Zealand. At the reception, Hindu Council of New Zealand was represented by Selva Ramasami, Coordinator of Government Engagement.

At the same reception, while discussing with His Excellency Muktesh Pardeshi, High Commissioner of India had said “The Indian diaspora should be very proud of the openness and welcoming attitude of the New Zealand Government in permitting Dr. Sharma to take the oath in one of the official ancient languages of India”.

When the whole world is celebrating the openness and diversity of the New Zealand Parliament, there was one “Hindu phobic” journalist questioning the usage of Sanskrit by Dr. Gaurav Sharma. He wrote on twitter “How is it that new Labour MP is sworn in at New Zealand Parliament using a language of religious oppression & caste superiority? Sanskrit is mark of Hindutva – mark of fundamentalism. What of Labour’s working class values or is @gmsharman a token?”.

The Hindu Council of New Zealand condemns such statements by people who do not know the value and respect for Sanskrit language. We are happy to note that local Bharatiya media have also condemned such statements. For example, Sandeep Singh wrote in the Indian Weekender “NZ journo’s charge against Sanskrit language and kiwi-parliamentarian loaded with ignorance and bigotry”. This article goes on to say “It represents a skin-deep colonial-contempt reserved explicitly for people of colour – especially those who are breaking the ceilings and getting into spaces and positions earlier considered reserved exclusively for only white men.”

This journalist’s comments have hurt the sentiments of many people, not only from Hindu community, but others as well.

Kiri Cowie, a Maori lawyer based in Malaysia, said “Hindus are a peace loving, law abiding, co-existing and contributing community throughout the world. Hindus believe that all – humans, animals and plants – have a living divine soul and should be respected. Many commonalities with traditional Maori beliefs and worldview can be found. ‘Hindutva’ is a modern concept that essentially means ‘Indianness’ and refers to a common shared geographic area, culture and ethnicity of the numerous peoples of India. In recent times, the term has been hijacked by certain political ideologues to impute a negative connotation”.

Sanskrit, which means ‘refined’ or ‘perfected’, is one of the oldest languages, tracing back thousands of years. Its influence can be seen in the languages of many countries, including India, South Asia, Southeast Asia, Tibet, China, Korea, Japan and Europe, leading it to be known as “the mother of many languages”. William Jones (1746–1794), an English philologist, describes it, “The Sanskrit language, whatever be its antiquity is of wonderful structure, more perfect than the Greek, more copious than the Latin and more exquisitely refined than either”.

Sanskrit is used for Vedic chanting, which has been considered as the outstanding oral cultural tradition, and has been declared as the World’s Intangible Cultural Heritage by UNESCO. American philosopher Henry David Thoreau (1817–1862) wrote a tribute to the Vedas, “Whenever I have read any part of the Vedas, I have felt that some unearthly and unknown light illuminated me.”

Hindus are well known to be a hardworking, law abiding and accomplished community, deeply rooted in their traditional values. This type of denigration of them and Dr. Gaurav Sharma, simply for representing his beliefs and culture by taking his oath in Sanskrit, is both unjustified and very concerning.

(This media release has been provided by Hindu Council of New Zealand Inc.)