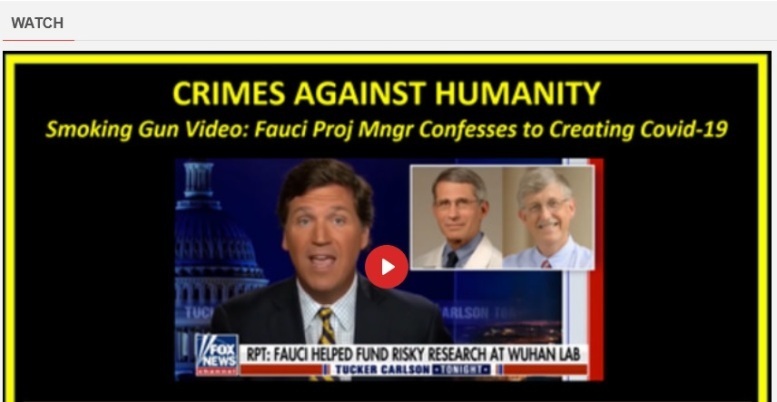 On May 12, a 22-minute video carrying an investigative report was posted by Robert David Steele. According to the report, in an older (December 2019) interview of Dr. Peter Daszak, he was found to be bragging about how a Coronavirus can be manufactured in a lab.

Dr. Daszak is the President of EcoHealth Alliance and is said to have deep links with Dr. Anthony Fauci, Director of the National Institute of Allergy and Infectious Diseases (NIAID) in USA which comes under National Insitute of Health (NIH). Dr. Fauci is also the chief medical advisor to the US President. Dr. Daszak was Director of six research projects funded by NIH which focused on the emergence of novel zoonotic coronaviruses (CoV) with bat-origin, and has collaborated for many years with Shi Zhengli, the principal investigator of the Wuhan Institute of Virology.

The report begins with the questions on this issue that were raised by Tucker Carlson on Fox News. Carlson states that the National Institute of Allergy and Infectious Diseases which has for decades been run by Dr. Fauci, had from 2014 to 2019 been pumping money into EcoHealth Alliance of which Peter Daszak is the President.

Carlson also says that the Gain-of-Function type of experiments that Daszak was seen bragging about had been banned by the US government which had put a moratorium on this type of research. Carlson asks why given such a moratorium, had the US government not halted the funding to the lab in Wuhan.

He asserts that Dr. Fauci signed off on the funding given to Wuhan despite such a moratorium, and possibly the Director of National Institutes of Health (NIH) Dr. Francis H Collins was also part of making this exception to fund the research at Wuhan and the ‘deadly experiments’ that were being done there. Carlson says that this would not have happened if Dr. Fauci had not allowed it to happen.

In a functioning country, Carlson says, there would be a criminal investigation on Dr. Fauci’s role in the pandemic that killed millions and changed their country forever.

Robert Steele’s commentary follows the introductory questions by Tucker Carlson. He mentions an article by Nicholas Wade on Medium which has been discussed at length here. Wade’s article lays out that the Wuhan Lab was a joint operation between the Obama administration and the Communist party of China and Dr. Fauci was running the operation.

Steele asserts that the people who were running these projects at the Wuhan lab were the ones who authored the Lancet article which stated that Covid was not created in the lab but was connected to the wet animal markets of China, which Steele calls ‘fake information.’ In essence, the same people who were funding the operation and running it were also doing the cover up, he claims.

Regarding the 2019 Daszak interview, Steele asserts that Daszak admitted to working on creating a super-virus from five viruses and on how such a super-virus can infect humans so that a vaccine can be made to prevent infection. That is how bio-weapon development works says Steele, where one can claim that one is creating a bio-weapon that someone else may create so that one can counter it. Nature would never combine five viruses together.

Steele speaks of gene editing technology being available to China, Australia, India and others and informs about the findings of researchers from Bharat around 14 months ago that showed that the Corona virus had an HIV delivery system and many viruses were spliced together. (Paper mentions four insertions in the spike glycoprotein that are unique to 2019-nCov.)

In 2015, a biological weapon was being developed in North Carolina, he asserts, which combined SARS and HIV. There was a general outcry from scientists regarding the safety aspect so the whole operation was moved to Wuhan.

Daszak was the Director of six projects funded by NIH at Chapel Hill, North Carolina, and due to the outcry of scientists in the US, these projects were then moved to Wuhan, Steele claims. The public funding that was provided by NIH was also moved over to Wuhan and this was signed off by Dr. Fauci whose signatures are on it, he asserts.

Daszak is said to have received more than $ 3.7 million from NIH, Dr. Fauci, and Bill Gates subdirectors to weaponize and combine five different viruses. Daszak, in the 2019 interview says that they found 100 different kinds of SARS corona viruses and that some of these could get into human cells, what he calls  “spillovers” from animals to humans. He also speaks about manipulating such viruses in the lab through the spike protein and about creating a vaccine through this kind of research. Prof Boyle had also spoken of the intent to create a vaccine that can then be sold for profit.

‘The Great Reset’ theory which has been circulating lately is also mentioned by Steele. The idea was that pharmaceutical companies can mint profits and China gets to win the trade war. The work commenced in North Carolina in 2015, Steele claims, when Dr. Ralph Baric teamed up with Shi to work on enhancing capabilities of the bat viruses to attack humans. Even worse, Dr. Fauci had, in 2012, been researching corona virus vaccines at the University of Texas, Galveston, and had found that the vaccines caused mass animal deaths of the lab rats used for the research. The research had found that the vaccines caused Alzheimer’s like symptoms, blood clots, heart attacks, and lung damage.

Further, Steele’s report claims that Bill Gates had publicly spoken of wanting to depopulate the world and that Gates has been looking happy in recent appearances on TV after the pandemic hit the world. In many recent appearances shown in the report, Gates is indeed seen “giggling” and laughing.

Daszak’s 2019 interview implies he was caught ‘red handed,’ Steele thinks. Emails have been unearthed where people from Daszak’s organization EcoHealth Alliance have been caught saying that the public should not get to know that they are the ones that wrote the Lancet paper covering up that the virus was lab manufactured.

Steele alleges that the history, funding, documentary evidence, and attempts to cover up indicate that it was a big conspiracy and it is always hard to cover up big conspiracies. In fact, Dr Fauci actually owns the patents for many of the vaccines, Steele says, and is growing wealthy each moment that we speak. In a question and answer session with Senator Rand Paul that the report shows, Dr Fauci is seen denying funding Gain-of-Function research. More on this is available here.

Steele says that harvesting wild viruses, splicing them up together, releasing them to cause worldwide shutdowns, and then posing as the saviour was just half the part of the equation. The remaining half involves ‘bullying the world to take experimental mRNA vaccines that change our very DNA.’

Steele says that about 18 months ago, many scientists were already speaking about changing the DNA code of the world. For example, in 2017, the CMO of Moderna, Tal Zaks, said during a Ted Talks that a Moderna injection can alter the genetic code of the DNA. Steele says this is a backdoor method to ‘mass test unproven genetic therapies on the world.’ The use of Moderna vaccine is now being authorized for use on 12 to 15 year olds as well and by next month they would target newborns and toddlers too.

Steele calls the conspirators the Globalists and says that they must be brought to justice else they will continue with their biological assault on human beings.

The world already knew about the role of China and now questions about the role of vaccine companies in the pandemic. have also been raised. This exposé comes from within the US and puts out additional information in the public domain such as the role of funding from US official sources to the Wuhan lab research and the alleged involvement of certain US medical personalities and tycoons.