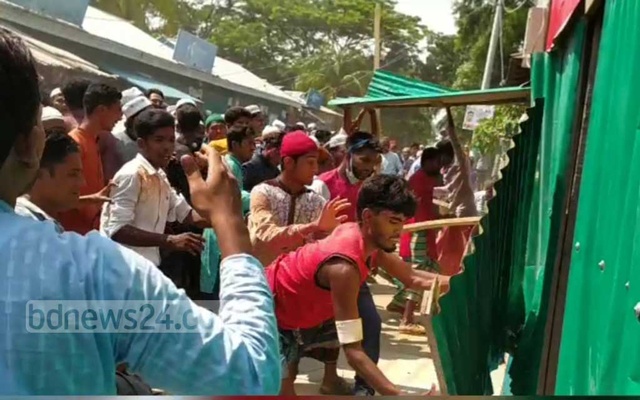 In a rerun of events from October last year, local Muslims attacked a Hindu man’s fish shop in Bhola region of Bangladesh over a social media post that allegedly hurt their religious sentiments, reports bdnews24.com.

Police said that Muslim worshippers gathered at Chowmohoni Bazar after Juma (Friday) prayers at three local mosques to ‘protest’ over the FB post made on Thursday. Some of the protesters launched an attack on the Hindu man’s fish shop at Chowmohoni. Clashes erupted when the police tried to stop the attackers.

At least 10 people were injured in the clashes during which the police fired into the air to scare the protesters away. Police have arrested the Hindu man and were bringing charges in a case against him.

In October last year, Hindu youth Biplop Chandra Baddya’s Facebook account was hacked by Muslim attackers, who then blackmailed the 25-year-old before posting blasphemous comments against Islam to frame Biplop. This then sparked violence against Hindus in Bhola region, destroying a temple and nine Hindu homes.

Likewise, 30 Hindu houses were looted and torched in Rangpur district in 2017 after rumours that a Hindu youth had published an offensive Facebook status. In 2016, major violence erupted after an anti-Islam FB post was uploaded from the hacked account of a poor Hindu fisherman Rasrasj Das; 10 temples and hundreds of houses of the Hindu community were razed to the ground at Brahmanbaria‘s Nasirnagar upazila, as part of the conspiracy to grab Hindu land.