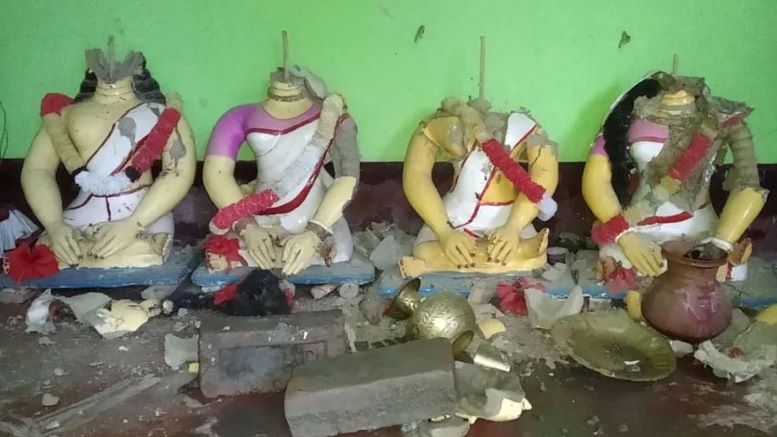 Within a week of a Ganesha Temple being torn down in Bhong city, Pakistan, a hundred-strong-Muslim mob attacked and plundered at least 10 temples in Bangladesh’s Khulna district. The incident happened on Saturday, August 7th, after a group of Hindu women devotees had an altercation with an Islamic Imam the previous evening.

On Friday evening, a group of Hindu devotees from Shili, Rupsa Upazila in Khulna gathered to perform some religious rituals and organized a procession from the local Purba Para temple to the Shiali crematorium. A mosque was located on their way to the crematorium, and as the group of Hindu women passed by the mosque, they were called out by an Islamic cleric, an Imam, who raised objections against the Hindu ceremonial procession which led to a squabble between them and the Imam and both the parties agreed to take the matter to the local police the next day.

However, the Muslims of the area seem to have had a different plan as the following evening hundreds of them gathered to form a terrorizing mob and launched an ambush attack on the Hindus of the Shiali Village. On August 7th, from 3 PM to 6 PM, the mammoth radical mob entered the village with locally made sharp-edged weapons like hatchets, cleavers, and axes. Their prime targets were the four big Hindu temples in the village and they plundered them totally. The murtis of Hindu deities at the Shiyali Purbpara Durga Temple, Purbapara Hari Temple, Govinda Temple, Shiyali, and Shiyali Mahasmashan were smashed to pieces. The ferocious mob then desecrated six other smaller temples of the village.

When vandalizing 10 Hindu temples did not satiate the rage of the Muslim mob, innocent and defenseless Hindus and their properties became the next victim of their ire. They ransacked over 56 Hindu homes, looted valuables, and destroyed the temples of the houses. Dozens of Hindu-owned shops situated at the main marketplace were looted by the Muslim mob during this mayhem. A drug store owned by Ganesh Mallick, the tea and grocery store of one Sourav Mallick, another grocery store owned by Srivastava Mallick and tea shops of Anirban Hira and his father suffered great damage and loot during the chaos.

The jihadists also burgled milking cows and other cattle that the Hindu villagers reared for nutrition and that served as a source of income to the economically backward Hindus of this area.  Several unarmed Hindus sustained serious injuries after being pounded mercilessly while protecting their shops from the radical mobs.

The violence continued for hours but the local police failed to reach the epicenter of it on time and provided no protection to the Hindus. President of the Rupsha Thana Puja Celebration Parishad Shaktipada Basu alleges that the police had chased away the Hindus when they approached the Shiali Camp police station to inform them of the ongoing violence and tried to register a complaint. “Police of the Shiali camp resisted the Hindu villagers when they wanted to chase the attackers during the attack,” asserts Basu. Some Hindus had formed groups to counter the Jihadi mob but the police resisted any action and the mob has already dispersed.

However, the Superintendent of Police, Khulna, Mahbub Hasan asserted that a big police contingent had been deployed in the area and that the situation had been brought under control. We are working with local people,” Hasan informed while addressing the press.

This is the second major mob attack on the Hindus in Bangladesh in less than two months. On the Eid al-Adha last month, a similar mob attack was orchestrated in Kotalipara Upazila of Gopalganj, Bangladesh. Triggered by a trivial matter of win or loss in a local football match, Muslim crowds attacked local Hindus, raided their houses, and plundered Hindu-owned businesses.

On the day of Eid-ul-Azha on July 21,local Muslims brutally attacked & vandalized innocent Hindus at Kalabari Union Parkata Bazar in Kotalipara upazila of Gopalganj, Bangladesh with the slogan of sacrificing Hindus.50 Hindus injured.Police beat Hindus on the side of the attackers pic.twitter.com/AH8GOkSoWS

The Hindus were not only assaulted but according to an eye-witness, some Muslims in the radical mob gloated that they will sacrifice not cattle but the Hindus on Eid al-Adha. The police had joined forces with the Muslim mob and flung bricks and stones at the Hindus.