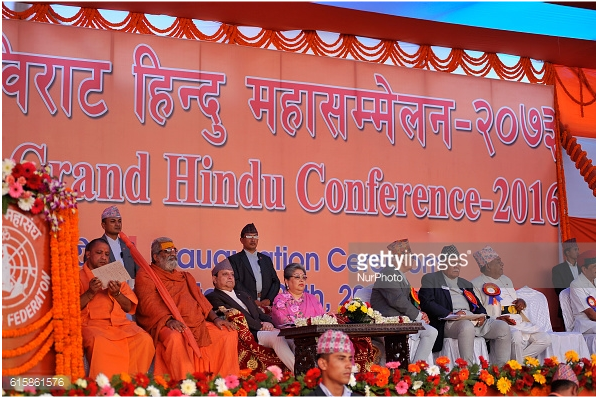 The three-day International Grand Hindu Conference organized by the World Hindu Federation International (WHFI) at Bankali, Pashupatinath, was inaugurated yesterday by former King Gyanendra Bir Bikram Shah. The former monarch urged one and all to preserve the Hindu Sanatan religion, stating that the religion that came into being since time immemorial embodies social goodwill, unity, and tolerance.

“Former King Shah further stated that though Nepal was a place of origin of Hindu Sanatan and Buddhist religions, even the Jains and Kirats are in harmonious existence in the country. He urged that we should not indulge in politics of negation, arguing that it would further create the feeling of rebelliousness.

The conference also convenes representatives, including Vedic scholars and Hindu campaigners from 10 countries, such as the USA, Thailand, Pakistan and Indonesia.

A proposal demanding reinstatement of Nepal as a Hindu nation will be endorsed by the Conference besides electing a new leadership for the Federation, according to WHFI Secretary Ashmita Bhandari.”

Earlier, at a press conference organized by the World Hindu Federation International, Kathmandu on Sunday, the organizers announced the goals of the conference –

Former President of the Federation Bharat Keshar Singh expressed his confidence that the event will be instrumental in raising voices more eloquently for Nepal to restore its lost glory of being the only Hindu nation in the world.

Hindu State Political Committee also held a press conference on Wednesday to talk about the conference. Addressing reporters, General Secretary of Hindu Rajya Prajatantra Party, Rabindra Paudel said that a country without a King is similar to a person without eyes. “A King is an eye of Nepalis, the country is another eye. Therefore, we should have in-depth discussions on Hindu State and Nepal’s monarchy.”

Similarly, Chairman of Leek Nepal Shanti Ekata Party, Dhanendra Basnet claimed that the current regime of the country is leading the country toward separation. “Except monarchy no other force can lead our country toward peace and stability. If we don’t establish our country again into a Hindu State, it will benefit neither Bharat nor China.” He further requested the major political parties not to take the political force as underdogs.