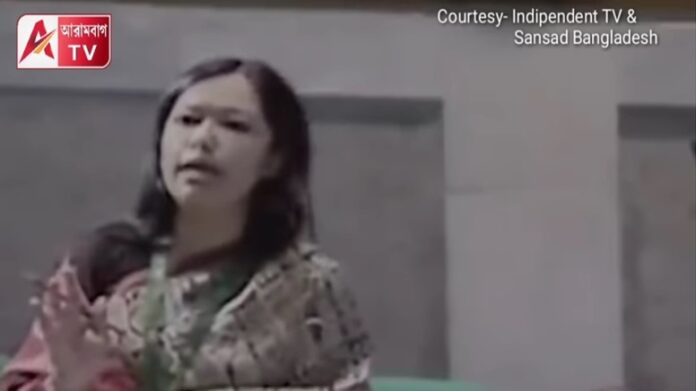 The revelation of 75 lakh missing Hindus from the country’s demography triggered a heated debate in Bangladesh’s parliament with a parliamentarian from the opposition, Rumeen Farhana criticizing the Sheikh Hasina led Awami League regime for not being able to save the Hindu demography despite its claims of secularism.

Continuing with her speech, Farhana said, “we are noticing that some parliamentarians and some significant individuals from the governing party are trying to blame the state religion, Islam, for such attacks but we are forgetting that the same article 2(A) states that all other citizens of other religions will practice their faith and religion with same respect and rights.

Then why, respected speaker, has it so happened that as per the Bangladesh Bureau of Statistics (BBS) 2011 population and housing census report, compared to the population of Hindus in Bangladesh in 1974 census, the Hindu population has not only not grown but 75 lakh Hindu count is missing from the country. The elaborate research holds two major reasons as the cause of the decline in the Hindu population in the country. Firstly, there has been a large scale migration of Hindus from Bangladesh to other countries. Secondly, the birth rate among Hindus is much lesser as compared to that of Muslim couples. Still, over 50 per cent of the cause of declining Hindus is their leaving the country.

Respected speaker, why after 50 years of independence when we are celebrating the golden jubilee when the power is with such a government that calls itself ‘secular government’, that claims that no one else can work for the cause of the minorities better than them, why is such a report being published that instead of growing in numbers, 75 lakh Hindus have lessened from the population.

Respected speaker, if we focus on the events from 2012 – though this government came to power in 2009, since then it has retained power continually – since 2012 to 2017, we have seen communal violence on the minorities in almost all the districts of the country including Ramu, Santhia, Homna, Malopara, Nasirnagar, Thakurgaon, Banaripara, Kalmakanda, Gobindgunj. And justice has been delivered in not one of these cases. Instead, some of the culprits have been awarded. Why do I say that they have been awarded, respected speaker, is because just a while ago the parliament was all riled up about the UP (Union Parishad) elections. We have seen that 3 individuals having direct links to the communal violence in Nasirnagar have been nominated as candidates from the Awami League for the UP elections.

Later, in the face of a major backlash about this decision in the media, their candidacies were withdrawn. However, the initial act of nominating these people as their candidates exposes the intentions of this government.

Respected speaker, four districts were prominently covered by the media during the Durga Puja violence this year which were Comilla, Rongpur, Noakhali, and Chandpur. Apart from these, there are 22 more areas where these attacks had continued.

The Hindu Buddhist Christian Unity Council states that every year the number and intensity of attacks on minorities increase instead of decreasing. In the past 9 years, there have been 3879 attacks. If we focus on the Comilla incident, it was 7 AM when the unfortunate incident of the holy Quran Sharif being placed at the feet of the Murti. There were not many people in the area. But one individual did a Facebook Live session in front of the OC (Police Officer in Charge). Instead of arresting the person who was doing a Facebook Live (that instigated the riots), the OC let him continue with the Live (broadcast).

We have seen how much damage a Facebook status can cause in the incidents of Ramu and Nasirnagar. But in the Comilla case, we witnessed that for a prolonged duration someone is doing a Facebook Live, but no action was taken.

In the Chandpur (violence) case, we have seen names of (Awami League) party workers surfacing, names of members of governing party’s student league surfacing, and the same was the case in Rangpur violence as well. And one thing common in all these cases is the ineffectiveness of the administration. When spoken to eyewitnesses, it has been learnt that the administration and police took no action. In each of these incidents, there were thousands and thousands of accused. In the latest case, 20 thousand accused have been documented. Names of just 5 or 10 are known and thousands of others are recorded as nameless…”

MP Farhana was yet to conclude her speech but the speaker interrupted her citing time constraints.

Bangladeshi Hindus – caught between a rock and a hard place

Clearly, all sections of Bangladeshi polity now agree that the number of Hindus in the Islamic country is on the decline due to sustained and institutionalized persecution. As the Prothom Alo article informs us, the first census of independent Bangladesh carried out in 1974 showed Hindus were 13.5% of total population. By the 2011 census, their percentage had dropped to 8.5%. The share would be even less today, after 10 years. So actually, 75 lakh Hindus went missing in just 37 years, not 50!

The trend of Hindu decline in the region of present-day Bangladesh in actually 100 years old – in the 1901 population census, Hindus made up 33 per cent of the population in the region. This number has shown a downward trend in the censuses carried out every 10 years. Abul Barakat, a renowned economist and professor of Dhaka University, has predicted that in the next 30 years, there will be no Hindus remaining in  Bangladesh.

It is good that this slow genocide is now being talked about openly in Bangladesh and the world. However, it is important to understand that the record of the Opposition BNP party, which MP Rumeen Farhana belongs to, in protecting Hindus is even worse than Awami League.

BNP is led by Khaleda Zia – the 76-year-old chief rival of PM Sheikh Hasina is currently serving a 17-year-jail term for embezzling foreign donations, although she has been shifted to hospital due to bad health.

BNP is in alliance with Jamaat-e-Islami (JeI) and other Islamist outfits. JeI was founded in Bharat by Islamic scholar Abul Ala Maududi in 1941, and supported Pakistan during Bangladesh’s War of Independence 1971. The fundamentalist Islamic organization participated in Pakistan Army’s genocide of 3 millions Bangladeshis, 2.4 million of which were Hindus.

Khaleda Zia’s husband, Major General Ziaur Rahman became the President of Bangladesh in 1977. He paved the way for JeI’s political participation through the Fifth Amendment to Bangladesh’s Constitution which abolished the provisions of Secularism and Socialism and provided the provision for forming political parties based on religion.

His wife, Khaleda Zia, continued this legacy after his death. Jamaat-e-Islami utilized its alliance with BNP to regain its lost power and glory. Hindus faced horrific communal violence under BNP rule from 1991-96 and then again from 2001-06. After BNP’s 2001 election victory, Muslims raped over 200 Hindu women in Bhola district alone: the youngest victim was 8, the eldest was 70 years old.

Although there is talk that younger BNP leaders are advocating ending their party’s alliance with the Jamaat, the fact remains that Islamist outfits are deeply entrenched in Bangladeshi’s social fabric, and each political party appeases them to some extent or other.

Only international pressure, especially from Bharat, can ensure the safety and security of Hindus and other minorities in Bangladesh. But the secular Republic of India has been largely apathetic towards plight of Bangladeshi Hindus, as evinced recently by a senior Indian diplomat belittling the Durg Puja anti-Hindu pogrom that raged for a week in Bangladesh as a ‘small incident’.