Pakistani Hindus find no respite in the much-touted ‘Naya’ (new) Pakistan under the cricketer-turned-politician PM Imran Khan. Cases of minor Hindu girls and even married Hindu women being abducted, forcibly converted and ‘married’ to Muslim men have not stemmed one bit.

Here are 3 recent cases, which would shame any civilised society, but are just par for the course in the Islamic Republic of Pakistan. We thank activists like @Mukesh_Meghwar for their tireless work in tracking these tragic cases of inhumane persecution –

1.)  14-year-old Aneeta Kolhi (a class 8 student) was abducted from her home at night by Habib Bareecho and others from the village of Uderolal, district Matiari, Sindh. Her father Ranshi Kolhi told media that Uderolal police is not lodging an FIR. Despite knowing full well that the girl is a minor and there is a Sindh Child Marriage Restraint Act, 2013 in place, senior police officers kept dragging their feet, before finally recovering the girl and arresting her kidnapper.

2.) 16 year old Vidya Maheshwari was kidnapped from Maripur Karachi. Her distraught parents are appealing the authorities to act, and her broken grandfather says they have no issue even if the girl was forcibly converted to Islam as long as they can confirm she is safe.

One more Hindu girl Vidya age 16 year abducted on 20.05.19 from Karachi Sindh Pakistan.
Kindly mention some one who can stop forced conversion of Hindu girls in Pakistan. pic.twitter.com/94ntCdwJOY

3.) A Hindu mother of 3 was kidnapped by one Rajab Jamali in Badin district, Sindh. She was held for 3 months, raped, tortured and forcibly converted to Islam. She somehow mustered the courage to testify in court against her abductor and managed to return to her husband & children. Note, how the so-called liberal Dawn newspaper of Pakistan is skeptical about the ‘forced conversion’ aspect of the case in its headline.

Another victim of forced conversion Khetu kolhi frm Badin produced before court. She is already married having 3 children. Rajab Jamali kidnapped her 3 months ago & forcibly converted, raped & tortured her. She is now with her former husband. @Xadeejournalist @BBhuttoZardari pic.twitter.com/VgVS6TuwbJ

The cases are just too many for a small news portal like HinduPost to track. This is a slow, silent genocide taking place right in front of our eyes, which ideally should have an army of activists & NGOs dedicated on a daily basis.

Human rights activist Mukesh Meghwar has compiled a list of at least 28 Hindu girls abducted, raped and forcibly converted in Pakistan over the last 75 days: 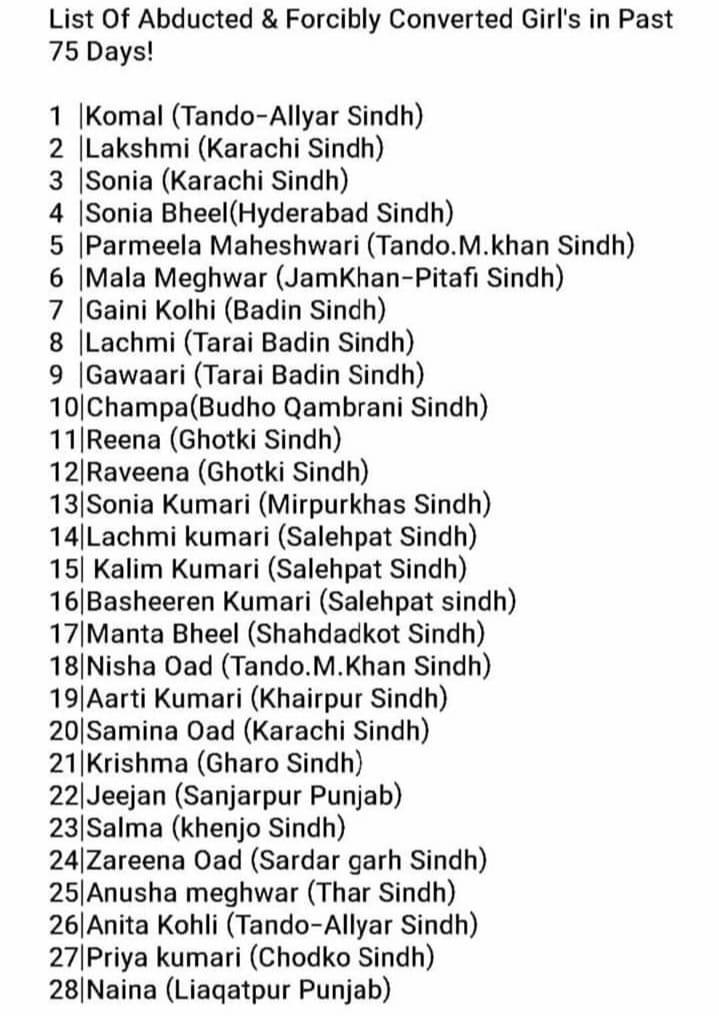 Most such forced conversions of Hindu girls are carried out in ostensibly ‘moderate’ Sufi shrines like Pir Jan Agha Khan Sarhandi, Pir Bharchundi Sharif etc. Authorities and courts turn a blind eye, and even if the parents manage to get an FIR lodged and take the case to court, their daughter is sent to a shelter home where she is exposed to all sorts of intimidation and threats and finally forced to admit in court that she converted of her own free will and prefers staying with her new ‘husband’. And no judge will dare go against the Islamic fundamentalists who openly issue death threats to anyone trying to recover such girls.

This is the ugly face of Pakistani society that the deracinated liberal elite of Lutyens’ Delhi want to keep hidden from the ordinary Indian, just so that their utopian dreams of a brotherly South Asia led by ‘charming’ Oxford-educated men like Imran Khan can be kept alive at the expense of Hindu blood and suffering.